Cole Cabana should get used to playing on Saturdays.

The 3-star running back prospect showed why he has caught the eye of colleges Saturday, scoring six touchdowns and amassing 346 yards on the ground in Dexter’s dominant 56-27 victory over Monroe.

With Dexter trailing Monroe 7-0 Friday night after the first quarter, the game was suspended at 7:26 p.m. due to lightning, and was officially postponed after a 63-minute delay. Saturday, the only lightning at Al Ritt Stadium was Cabana’s electric-speed.

“If there’s a better back [than Cabana] in the state, I want to see him,” Dexter head coach Phil Jacobs said. “He’s phenomenal; he’s a dynamic, quality back.”

Dexter’s offensive line was outstanding in its own right, delivering big holes and earning praise from Cabana after the game.

“Our O-line did an amazing job opening up all the holes I needed. Once I get past that, and once I get by the D-line and linebackers, it’s all open field from there,” Cabana said. 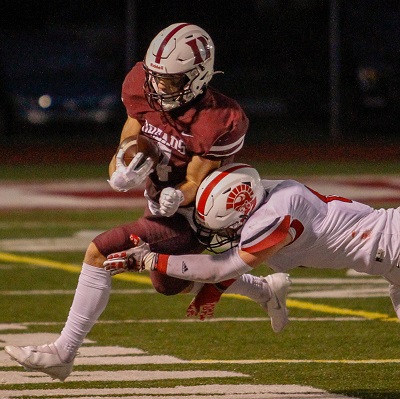 Dexter got off to a bit of a sluggish start Friday night before the weather delay. Monroe marched down the field with ease on its first possession of the game, scoring just six plays in on a 16-yard touchdown run from Carson Deseranno.

The Dreads nearly went down two scores after Monroe forced a Dexter punt and had goal-to-go on the 6-yard line on its second possession. But Dexter’s defense didn’t break, and senior Noah Drummond came up with a big run stop on third down. Monroe attempted a 25-yard field goal attempt, but linebacker Andrew Gersh blocked the kick.

Dexter drove the ball down to Monroe’s 2-yard line as the first quarter ended. As it ended up, a 28-yard slant from quarterback Cal Bavineau to receiver Braeden Fuson was the final play on Friday night.

Jacobs said Dexter took advantage of the postponement, making the necessary adjustments to dominate on Saturday.

“The lightning delay last night, we made some adjustments both offensively and defensively, and it paid dividends for us,” he said. “Our kids played hard today, and they came out on fire.” 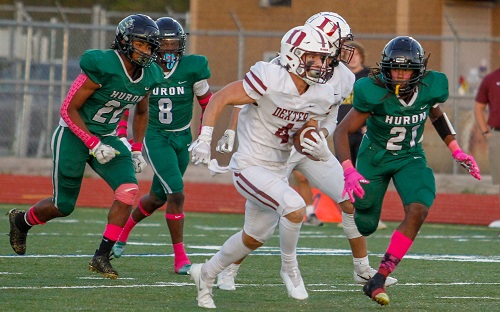 Dexter’s defense flipped the momentum with a fourth down stop in Dreadnaught territory on Monroe’s next drive, with lineman Corey Baker making the drive-ending tackle. Dexter’s offense capitalized, taking the lead for good with a 77-yard drive capped with a 26-yard touchdown run untouched up the middle from Cabana. Cabana also caught a screen pass for a 21-yard reception on third-and-10 earlier in the drive. Dexter led 14-7 with 5:31 remaining in the second quarter.

Dexter added two more touchdowns in the first half. A 62-yard run from Cabana set up his second score of the game, increasing the Dread lead to 21-7. Dexter got a second opportunity in the final minutes of the second quarter after Baker deflected a Monroe pass on fourth down. The Dreads made Monroe pay with a 7-yard touchdown pass from Bavineau to Cole Darby with nine seconds remaining in the half.

Monroe made the game interesting early in the third quarter, forcing three turnovers on Dexter’s first three possessions of the second half, and scoring twice. A 31-yard touchdown reception by Deseranno cut Dexter’s lead to 28-20 with 4:57 remaining in the third quarter.

Dexter was in need of a game-changing play, and defensive back Micah Davis delivered, intercepting a Monroe pass deep in Trojan territory. Five plays later, Cabana scored on a 10-yard run to increase Dexter’s lead to 35-20.

That wasn’t Davis’s only impact play for the Dreads. Monroe threatened to cut Dexter’s lead to one score when it recovered an onside kick after a 55-yard touchdown run from Tayshaun Nichols. With Dexter leading 42-27, Davis came up with his second interception, and Cabana scored from 41 yards out on the next play, ended any chance of a Monroe comeback.

Dexter improves to 5-2 on the season, but will have its hands full in the final two weeks of the regular season. Dexter ends the season with showdowns against Division 1 No. 3 Saline (7-0) and Chelsea (also 7-0), the top-ranked team in Division 4. Dexter travels to Saline next Friday, and the game kicks off at 7 p.m.

“We’re going through ‘Murderers’ Row’ right now to finish the season,” Jacobs said. “We’re going to enjoy this one tonight and then get back to the drawing board.”

Jacoby: Dexter can put up huge numbers on any give Friday – or Saturday

Written By
Terry Jacoby
More from Terry Jacoby
The Dexter girls’ basketball team fell behind 22-15 at halftime of its...
Read More