Lightening resulted in a delay at the end of the first quarter of Dexter’s home football game with Monroe on Friday evening. While the lightening didn’t hit the airplane circling overhead, it did put a charge into the Dexter offense – not that it needed any added electricity.

The Dreadnaughts had to wait a day before knocking off the Trojans in another brilliant performance by an offense that continues to dominate defenses all over the SEC.

But before we get to Dexter’s offensive juggernaut, let’s make a point about Monroe’s offense. The Trojans took an early 7-0 lead on Friday and then somehow stopped the Dexter offense – it turns out the Dreads do have a punter. 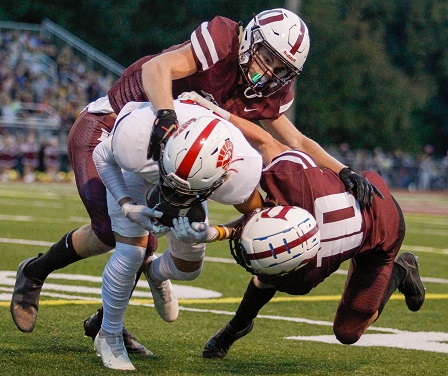 The Trojans then marched down the field and had the ball first and goal with a 7-0 lead. A touchdown would push the lead to 14-0 – and Monroe had to realize they would need every point they could get because they weren’t keeping the Dreads off the scoreboard.

Monroe not only failed to get a TD but missed the short field goal – probably should have gone for it anyway. It felt like that was the game right there. Now, even if they went ahead 14-0 it was a good bet Dexter would get things rolling but at least it would have made things interesting.

The only thing that ended up being interesting was getting everyone back on Saturday to finish the game as the Dreads finished Monroe 56-27 in a rout.

Dexter has now scored 40 or more points in five of its seven games – all wins. In their two losses, they scored 36 and 21. So, if you hold the Dreadnaughts under 40 points you have a good chance of winning – maybe.

Dexter improved to 5-2 on the season and 4-2 in the SEC Red and face two teams to finish the regular season that could very well keep the Dreads under 40 points. Saline is first on the schedule this Friday and the Hornets sit atop the league with a 6-0 record.

Saline hasn’t allowed more than 30 points in a game this season and have allowed just 35 points in their last four games combined. The Hornets have defeated both teams Dexter has lost to this season – Huron and Bedford by identical 35-21 scores. 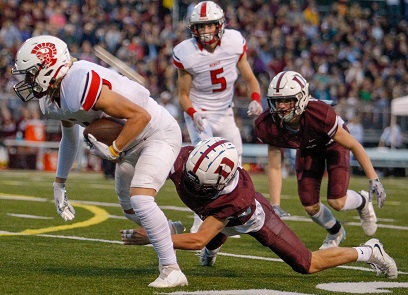 Chelsea and Dexter will meet on Oct. 22 to finish the regular season at Dexter. The Bulldogs are having a typical outstanding season and are 7-0 heading into Friday’s game with St. Joseph.

While the offense has scored 155 points in the last three games, the Chelsea defense hasn’t allowed more than 21 points all season and has held opponents under 14 or less in five of their six games (the win over Pinckney was a forfeit).

Dexter needs to win one of these games to get to six wins and lock up a playoff spot – although they probably get in easily with five wins considering their tough schedule. But unless teams start to figure out how to slow down the Dexter offense, the Dreads will be in every game and can beat anyone on any given Friday – or Saturday as Monroe discovered.

Written By
Terry Jacoby
More from Terry Jacoby
Michael McHugh has been coaching the Dexter swimming and diving team for...
Read More