Will Fawcett is currently the president of the Dexter Drama Club and says that he is “very proud of the home” they give to their 200 plus “student family.”

For Fawcett, theater has always been about “home” and “family.”

“The first thing I liked about Drama club was the community and how much people care about putting on a good show for the community,” said Fawcett, now a senior at Dexter High School. “To be in the drama club is like being in a group of loving and liked mind people.”

It was Will’s mom who was the inspiration behind him joining theater. But she didn’t exactly push him on the stage.

“My mom told me about her high school theater experiences and I wanted some of my own,” he says.

His most recent “experiences” will be from behind the curtain. He is the sound designer for the upcoming DHS production of “Little Shop of Horrors.”

“My crew and I are responsible for any sound cues needed for the show,” he said. “Sound is my home in the drama club and I have only done one other show on sound this year, so it’s nice to be back for my final show.”

He says one of the challenges of sound design is “finding all the sounds.” 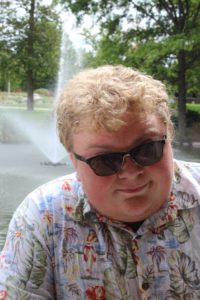 “They all have to sound good plus match the time period,” he says. “It’s challenging but one of my favorite parts. Examples of sounds we search for are a door slamming, a car horn, traffic in the distance, a burp, etc.”

Fawcett, who is currently involved in his 15th show with the drama club and 11th doing sound, says he’s been enjoying his time working with cast and crew. “The cast is wonderful.  They are all hard working and are doing a great job,” he says. “I haven’t been to a lot of rehearsals but the ones I have been to are going really well. My sound crew and I work as a group and then combine with the actors starting (this) week.”

Will, the son of Laura and Mark Fawcett, also is a member of the SWWC Video News Production (SHS Today) team at DHS. He will be attending Central Michigan University in the fall for broadcast and cinemas arts.

“I will be doing theater at CMU next year,” he says. “I would really love to direct another show in the future.”

Written By
Terry Jacoby
More from Terry Jacoby
The Dexter boys’ basketball team might not be celebrating its decision to...
Read More