The Dexter track and field teams competed in the Division 1 State Championships in Rockford on Saturday, and had five athletes earn All-State honors.

The Lady Dreads were led by Sophia Mettes repeating as state champion in the pole vault. Mettes cleared 13’0” to take the title this year. The senior is only the second vaulter to ever go over 13’ at the State Championships in any division. Last year, she vaulted 12’6” with her sister, Josie taking 2nd at 12’3”. She finished her season with a personal best 13’6” from the SEC Red Conference meet this season and setting a new school record.

In the shot put, senior Jamie Giese finished her season taking 5th with a throw of 39’ 2.5”. Giese also competed last year at the State Championships in the shot, finishing 17th. Earlier this season, at the Larry Steeb meet of Champions, she set the Dexter High School record of 43’ 6.5”. Giese, also competing in her first discus championship, finished 20th.

Running in her first state championship, sophomore 100m runner Isabella Gaetino finished the day seventh in her heat with a time of 13.15, for 26th overall. 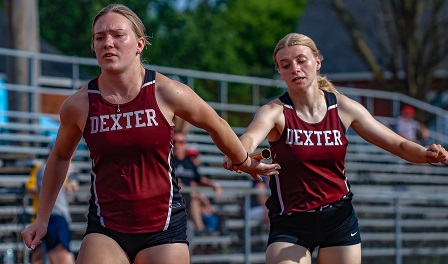 Junior Cole Cabana improved on his fourth-place finish last year in the boys 100m dash by placing third this year. Running into a head wind, Cabana finished crossing the line at 11.00.

In a competitive field this year, senior pole vaulter Cole Sheldon was also third, vaulting 15’6. Six other vaulters cleared 15’ in this season’s meet. Last year’s state champion in the vault, Sheldon qualified in two other events, having to compete in those in between the pole vault. He finished 17th in the long jump at 19’7.75.

Sheldon also was the lead leg for the 4×200 relay. Sheldon, Jonny Adamczyk, Micah Davis, and Cabana finished the day with a time of
1:32.57 for 17th. Earlier this season, the quartet set a new Dexter school record of 1:29.17.

Clark Sheldon, finishing his sophomore year, and competing in his first state championship as well, finished in eighth place in the pole vault tying his personal best mark of 13’6”. Senior high jumper Sam Fitzpatrick, in his first state meet, had a great showing jumping in a highly competitive field, narrowly missing his personal best jump of 6’0.

Written By
Terry Jacoby
More from Terry Jacoby
While the prelims had to be played, the finals of the MHSFHA...
Read More