The Dexter softball team knocked off two Ann Arbor teams in different ways on Saturday on their way to a Division 1 District championship. The Dreadnaughts won the opener 7-1 over Pioneer behind the dominant pitching performance by Paige Sayler and then scored six runs in the first inning of the championship game and coasted to a 6-2 win over host Skyline in the finals.

At the end of the afternoon, the Dreadnaughts were raising the roof and a District trophy.

Dexter advances to the Northville Regional on Saturday. The Dreadnaughts will play Novi at noon in the second semifinal game. South Lyon faces Ypsilanti Lincoln in the earlier semifinal game. The championship game is at 2 p.m. 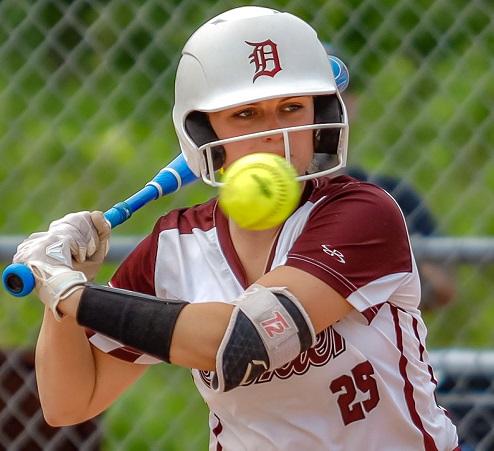 Dexter pounded out 11 hits in the win while Sayler allowed just one run on one hit and one walk with 16 strikeouts and dominated from the circle.

Sayler also delivered from the batter’s box where she pounded out three hits including two doubles and two RBI. 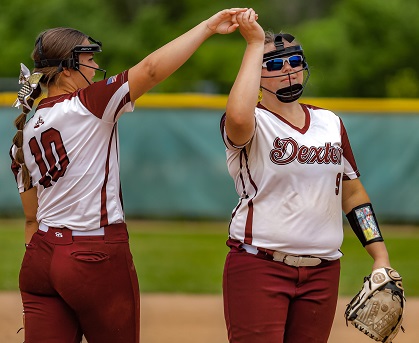 Ella Mitchell also had two doubles and scored twice and Morgan Sturmer had two hits including a double with a run scored and an RBI. Anika Busdeker knocked in a pair of runs for the Dreadnaughts.

The Dreadnaughts took charge in the championship game with a six-run first inning. Skyline scored twice in the third inning but couldn’t get any closer against Sayler (five innings, five hits, six Ks) and Audrey Gauthier (two innings, no hits).

Dexter only managed four hits in the win but it proved to be more than enough. Camryn Chase had a bases-clearing double and drove in three runs in that first inning. Maddy Thompson ripped a double to drive in a pair. Sayler had the other RBI for Dexter.

Sydney DiMarco and Nicole DiMarco drove in Skyline’s runs. Reyna Hyliard pitched strong in relief for the Eagles. She went 6.1 innings and allowed just one hit and two walks with five strikeouts.

Dexter swept the Ann Arbor teams in the postseason. The Dreads opened District play with a 17-0 win over Huron earlier in the week. Skyline advanced to the finals with a 23-0 win over Ypsilanti in three innings.