The Dexter softball team walked into the District semifinals with a 17-0 win Tuesday over visiting Huron in a Division 1 District first-round game. The Dreadnaughts scored three runs in the first inning and 14 in the second inning to put the game into the win column.

Dexter took advantage of Huron’s control problems, as they scored most of their runs in the second inning on walks and passed balls. The River Rats, who never quit despite the score, just couldn’t find the strike zone and it ended up costing them.

The extremely young Dreadnaughts have had a good season in the tough SEC Red and have improved as the season has moved along.

Dexter advanced to Saturday’s Districts semifinal round at Skyline. The Dreadnaughts will face Pioneer in the first of two games, with the first pitch at 10 a.m. Skyline plays Ypsilanti in the second game at noon. The finals are at 3 p.m. 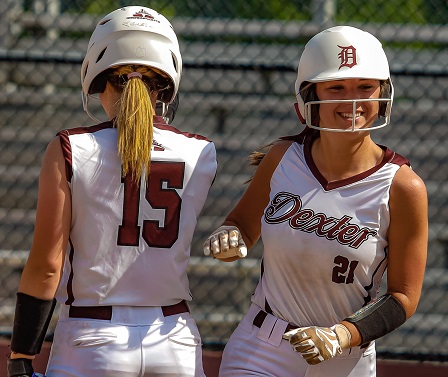 Written By
Terry Jacoby
More from Terry Jacoby
After knocking off conference-leader Huron last week and then Lincoln on Tuesday,...
Read More