Lori Hyman walks down the hall from the Livonia Stevenson gym to her office and points out a few pictures hanging on the wall of the school’s athletic Hall of Fame. She doesn’t point out that one of those pictures honoring the best athletes to ever play for the Spartans is actually her back in the day.

Hyman returned “home” to become Stevenson’s athletic director after five years working in Dexter in the same position. And she’s accomplished quite a bit during her career, including being recently named the 35th recipient of the MHSAA Women In Sports Leadership Award. Each year, the Representative Council considers the achievements of women coaches, officials and athletic administrators affiliated with the MHSAA who show exemplary leadership capabilities and positive contributions to athletics.

“I’m so honored to be included on such an incredible list of outstanding women leaders,” Hyman said. “Every part of my career has been rewarding and enjoyable, it’s been a passion of mine, every aspect.

“(Playing at Michigan State) was one of the best times of my life as a youngster. And then being an athletic director has probably been the most rewarding as an adult. Being apart of Stevenson and coming back home has been a tremendous and rich experience for me.”

Hyman, who received the Women In Sports Leadership Award during the MHSAA Division 1 Girls Basketball Final on March 19 at Michigan State’s Breslin Center, has only fond memories of her time in Dexter.

“Dexter was my first step into being an athletic director and I just loved my time there,” she said. “It’s a smaller community and a very loving and supportive community. There are great people in Dexter. John Hansen was my superintendent when I was there and he gave me my first chance and I will never forget that. I also had some great coaches at Dexter like Mike Bavineau who is now the AD there and doing a great job.” 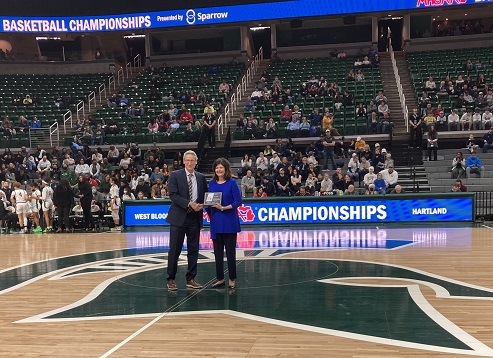 Hyman is still proud of some of those Dexter teams that competed at the highest level.

“When I was there we had great basketball programs, swim programs, cross country programs and our equestrian teams were winning state titles,” she says. “I never would have left Dexter if it wasn’t for Stevenson because it’s where I went to school. I was very happy at Dexter and had some great times there.”

Hyman was a standout basketball player for the Spartans, still holds two basketball records, and later played for the other Spartans in East Lansing – yeah, she was that good. For the past 22 years, Hyman has been the athletic director at her alma mater where she has served as a voice of leadership, education and mentorship for her colleagues statewide.

Hyman was named her region’s Athletic Director of the Year by the MIAAA in 2014 and received its Jack Johnson Distinguished Service Award in 2015.

“Lori has been a leader and pioneer in the world of athletics, and in particular as an advocate for females and girls sports,” MHSAA Executive Director Mark Uyl said. “When she left coaching basketball to work as an AD, it was an incredible victory for kids in our state. She’s been dependable, loyal and just a model of consistency in running a first-class program.”

Hyman is a 1975 graduate of Stevenson, where she also played softball and competed in track & field. She was named MSU’s Outstanding Athlete of the Year for women’s basketball in 1979, after serving as co-captain of the team that season but rarely playing because of an injury. She graduated with a bachelor’s degree in physical education and health in 1980 and also has a master’s in athletic administration from Wayne State University.

She served as a women’s college basketball coach over 17 seasons before transitioning into school sports administration in 1995.

Hyman says the role of an athletic director has changed over the years.

“The keys to the athletic director’s job today are being organized and leaning to delegate because you can’t do everything yourself,” she says. “It’s gotten more demanding and so has coaching. I don’t think people realize how demanding and time-consuming coaching is at the high school level. And our coaches are in it for the right reasons and the students flourish, not just as athletes but as people because our coaches truly care.”

Athletic directors also put in an incredible number of hours so the passion for the job is a key to success.

“We have to be here during school hours and then at 3 p.m. our second day starts,” Hyman says. “It’s a great field and I think being an athletic director is one of the best professions.  But no one really realizes the amount of time you put in until you start doing the job. It can get overwhelming and you juggle a lot of balls so you really need to be on top of things. You have to have a lot of energy and a lot of endurance.”