Tickets to the world premiere of “Sherlock Holmes and the Adventure of the Ghost Machine” went on sale this week. On stage April 15-August 27. Purchase your tickets at Purplerosetheatre.org or by calling 734.433.7673.
*Please note there are no performances on April 17 or June 19.

Sherlock Holmes and the Adventure of the Ghost Machine 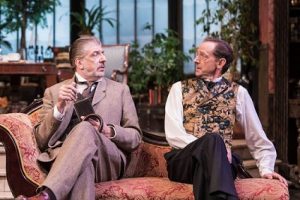 London: November 1905. England and the world are changing. As civilization edges towards the horrors of World War I, every day brings new tensions in Europe and technological advances that make Victorian England feel like a distant dream. Into the rooms of Sherlock Holmes come Nikola Tesla and Thomas Edison—with new inventions that will alter the course of human history—only both inventions have gone missing. Can Holmes, Watson, and Irene Adler somehow unravel the latest diabolical scheme of the late Professor Moriarty’s evil daughter, Marie Chartier? Can world peace be achieved by the most powerful weapon ever created? Can death itself be overcome by a scientific genius? And can Sherlock Holmes survive the greatest personal loss of his career?

Lifelong residents of a Detroit, MI aging housing project, 71-year-old Lucky bumps heads with her 49-year-old son Ceege as they gamble on change, each other, and the daily lottery.