The Dexter Trap Team is currently waiting out the cold weather, performing indoor exercises, readying their gear and their mental game for the Spring 2022 League with USA High School Clay Target League.

Registration for the Spring League opens Feb. 1 with practices starting Monday, March 28 at the Ann Arbor Moose Sportsman’s League (Moose Lodge #1253) and competition running through May 22. The Dreads Trap Team expects to field teams at the Michigan State Championship again this summer, to be held at the Michigan Trapshooting Association grounds in Mason, Michigan the weekend of June 18/19. The National Championship will also be held in Mason again this year (July 6-10).

Dexter had 25 shooters through the Fall 2022 League. The team placed in Conference 4, competing with equivalent-sized teams from Fenton, Saline, Napolean, Sandusky, and others. During the 5-week run, the scores from the top 16 shooters were submitted for the competition. Seven members of the Dread Trap Team contributed top scores throughout the competition period; Jack Papin, Kylee Garcia, Lorenzo Biundo, Connor Paris, Will Durbin, Dima Griffiths, and Brady Daugherty. Looking through the team records I found that every Dread that finished the league contributed a top score at least once through competition. 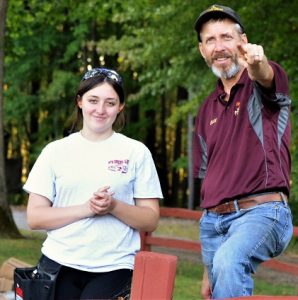 At the end of competition, the Dreads Trap Team finished the league in second place in Conference 4, slightly nudged out by the team from Fenton High School and ahead of the Columbia Central High School team.
Top Dexter male shooters in conference were Jack Papin (season average of 22.6/25) with Lorenzo Biundo (22.4/25) and Will Laurin (22.13/25) close behind.
Lady Dread shooters took five of the top 10 spots for female shooters in Conference 4 with Kylee Garcia at #2 (22.5/25), Lexa Seelinger #4, Whitley Fowler #5, Kera Root #7, and Rebekah Murillo #9. Kylee Garcia also placed #7 out of all female shooters participating in the 2021 Fall League.
Anyone interested in shooting for the Dexter trap team can contact the team through their Facebook page (1) Dexter Trap Team | Facebook and dextertrapteam.com. Typically, they hold a “Try it before you Buy it” day around the midpoint of the registration period, that has not been scheduled yet. They are also looking for individuals and businesses that would be interested in sponsoring the Spring 2022 team. There are various levels of sponsorship. Some of our previous sponsors include Washtenaw County Pheasants Forever #151, Bella’s Transport, Cabelas, the NRA, and Flex/N/Gate.
The annual impact report of USA Clay Target League can be found HERE for additional information on the League in general.

Written By
Terry Jacoby
More from Terry Jacoby
Skip’s Huron River Canoe Livery has been around for 46 years but...
Read More