The Dexter volleyball team faced a gauntlet of quality programs on Saturday and not only did they survive – they thrived! Dexter finished an impressive 5-2 in the very competitive SEC Red Jamboree and had a chance to get everyone plenty of action on the court.

“I am the absolute most proud of the way our team all works together,” said Dexter Coach Paula Palmer Burns. “We do not have a ‘lone star’ standout that gets 80 percent of our opportunities.  We have multiple kids in each position that step up for the success of our total team.”

Dexter (32-6-2 overall) was at full strength for the first time since Sept. 4 and served up plenty of quality play – and wins.

“I don’t know if this was the expected result with us moving into the SEC Red Division this year as the smallest school but we worked hard from day one with kids who were committed to our program’s expectations, drive, and culture,” Palmer Burns said. “We lost an amazing set of seniors last year and knew we would have to work hard to fill those positions and compete with multiple teams ranked in the Top 10 of the state in regular-season play.”

She says athletes from the seniors down through every level have worked hard and it’s paying off on and off the floor.

“We worked hard during the off-season, through two-a-days in pre-season, in the weight-room, and in the classroom,” she said. “We can’t wait to battle through the rest of the season and keep building our momentum.” 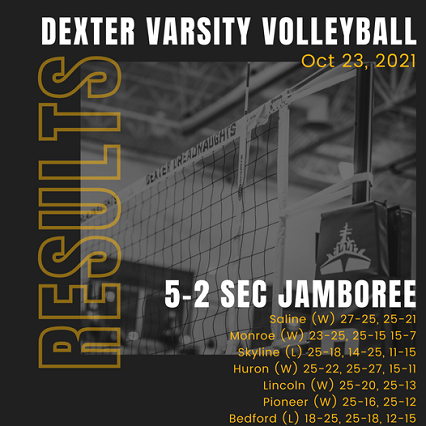 On Saturday, they even took a set from Skyline!

The Eagles, one of the top ranked teams in the state, knocked off Dexter in three straight during a recent SEC match at Skyline but Dexter won the middle game 25-14. The Eagles won the opener 25-18 and the last game 15-11.

Dexter faces Bedford on Monday (Oct. 25) in a rescheduled match that will determine whether they finish second in the SEC Red solely or tied with Saline. On Tuesday, Dexter has a conference crossover match at Adrian and the Huron Invitational on Saturday.