While we are all still processing what we learned from living through a historic pandemic, most of us can agree that our emotions during lockdown included a heavy layer of loneliness. At first, the seclusion allowed us all to slow down a bit and take a break from society while we reconnected with our home and our family.  But after weeks of staring at the same four walls, people began to crave the camaraderie and energy that comes from being an active citizen.

Last year, the Dexter Beer Grotto manager, Phil Blass, and owner, Phil Mekas, saw first hand the need for togetherness in their own small town. After a brief reopening following the initial shutdown, bars and restaurants were again ordered to close their indoor spaces.  In an effort to keep their staff employed, Blass and Mekas decided to create an outdoor haven and expand their patio. People gathered throughout the lowest temperatures of winter simply to feel the slightest sense of normality.

The loyalty of Beer Grotto patrons did not go unnoticed and once the staff became fully vaccinated, the team decided it was time to step up their weekday game and give their customers more of what they had been missing throughout the pandemic. Now, the local watering hole has added comedy, karaoke and live music throughout the week.

While boosting weeknight sales is always a good thing for any bar or restaurant, for Blass, profits were never the priority.

“We want Dexter to bounce back from the pandemic and become better than ever,” said Blass. “This community deserves to have fun and I feel a responsibility to help them achieve that.”

Beer Grotto patron and comedian Greg Sharp knows first hand the curative effects of laughter. After an intense bout of depression two years ago, Sharp realized that making other people laugh is where he finds joy.

He and Blass had always toyed with the idea of holding an open mic night at the Beer Grotto, but when the effect of the pandemic left comedians with few options to perform, their plan was set in motion and The Comedy Experiment was born.

“There are literally hundreds of stand up comedians in the state of Michigan but only a couple dozen venues for performing,” said Sharp. “The demand for stage time far outweighs the supply, especially in Washtenaw County. I wanted to experiment with a weekly open mic show that allows new comedians an opportunity to take the stage once a week and test their material. That type of show did not exist, until now.”

The Comedy Experiment happens every Tuesday night from 8-10pm.  While there’s no cover charge for admission, patrons are encouraged to add to the tip jar, which is divided amongst the comedians at the end of the night.

At each show, you’ll find Sharp distributing bracelets to support suicide prevention that read, “I’m Glad You’re Here”, as a reminder to all that no matter what they may be going through, they are not alone.

When owner Phil Mekas asked his patrons what they would like to see happen at the bar, many enthusiastically asked for karaoke night.  Now, each Wednesday from 6:30 – 10:30pm the Beer Grotto is filled with everyone from karaoke pros to those stepping up to the mic for the first time to display their vocal chops.  The evening is led by Rex Streetman, who has been hosting karaoke nights for years.

“People are ready to get out and start enjoying themselves,” said Streetman. “I have a good group of followers that come out, but there are still some that don’t feel safe.  I sanitize the microphones between every singer and offer mic covers to those who wish to use them.”

“It’s fun to watch people from all walks of life letting go and having a good time,” said Mekas. “The stress of the past year has taken a toll on so many, so it’s nice to give them an opportunity to safely escape their lives for a little while.” 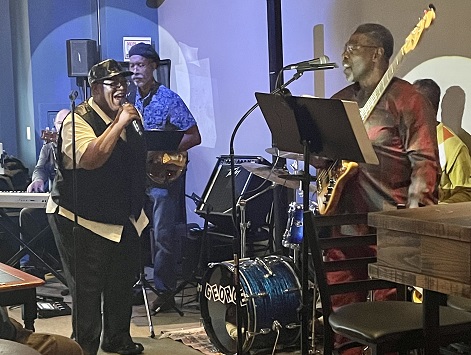 A popular new edition to the week has been live music on Thursday nights. Since August, the Beer Grotto has hosted local cover band Spur9, the Motown band Kalazh, and Dexter vocalist John Germain.  There is never a cover charge and the goal is to support local talent while giving patrons a great night out.

“I’d love for Dexter to become a town that people think of when they want to hear great music,” said Mekas.

These midweek events have brought many new faces to the Beer Grotto, and nearly everyday you’ll see manager, Phil Blass, sleeves rolled up, hustling to help his staff make sure each customer is properly welcomed and happily served. Due to the labor shortage, Blass has struggled to hire more employees, but doesn’t mind the extra work.

“Seeing people laugh together and bravely take the stage week after week makes the hard work worth it.”

The Beer Grotto is open 7 days a week and in the coming months has plans to expand their kitchen and add a full food menu to accompany their extensive selection of beer, wine and spirits.

To stay up to date on weekly entertainment or to enquire about joining the staff, follow the Dexter Beer Grotto at www.facebook.com/beergrottodexter.