Noah Enyedy admits there is something about everything being on your shoulders that is appealing.

“I often say, it doesn’t really bother me if I lose, it bothers me if I feel I could have left more on the courts,” he says of accepting the responsibility that comes with having everything on your shoulders.

Enyedy is a member of the Dexter varsity hockey team so he knows all about team sports and the importance of counting on your teammates for success – you can’t win a hockey game by yourself. And while he enjoys being part of a team, standing on center court all alone with just you, your racket and your ability is a challenge he’s learned to not only accept but enjoy.

“I play hockey, and while I love the team aspect of that sport, there is something about the individual nature of tennis that I really enjoy,” he says. “Whether you win, lose, play good or bad, it always comes back to you and your effort. It motivates me to work harder in practice and matches as I know that I can directly control the outcome of my own performance.”

Now a junior, Enyedy has done an amazing job controlling the outcome of his own performance. He only started playing tennis right before starting high school so he is relatively new to the sport. He started playing doubles as a freshman on the JV team and moved up to four singles as a sophomore and now to No. 1 singles as a junior – quite a quick climb up the tennis ladder. 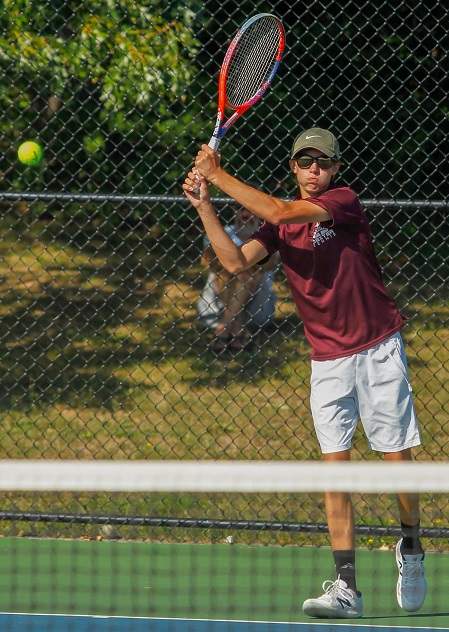 “As a freshman I played doubles on JV,” he says. “I was still learning a lot and it was a great opportunity to improve in a low stakes situation.

“My sophomore year I moved to four singles on varsity and this was a fairly large jump, especially considering I had never played singles. However, after a few matches I found that I really enjoyed singles and got much better by the end of the season.”

Speaking of fairly large jumps, Enyedy is now the No. 1 singles player for the Dreadnaughts and faces the other team’s top player. What was the jump like from four singles to one singles?

“One singles is certainly a challenge,” he says. “Last year I played 4 singles and while it wasn’t easy, I had quite a bit of success. Now, there are no break days, even the ‘bad teams’ we play have good one singles players so every match is a battle.

“I don’t feel too much pressure as my teammates understand the situation I’m in making such a huge jump from four to one, however I put quite a bit of pressure on myself just to try and play my best every match.”

“My mom had suggested that I take some lessons as she thought I would have fun with it,” he says. “We actually took the first few lessons together and soon enough I fell in love with it.” 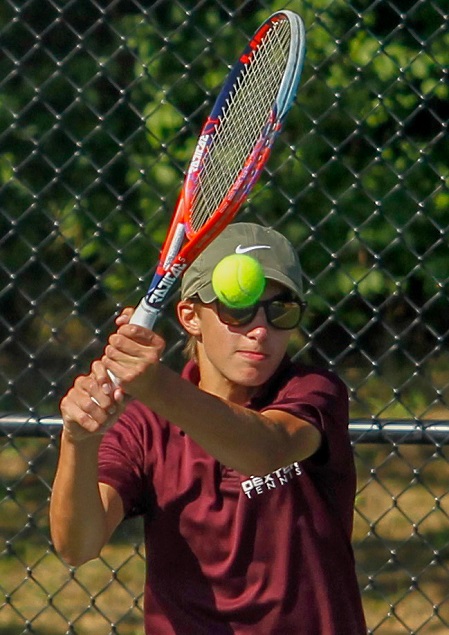 Dexter has built a strong program in tennis over the past few years and the Dreadnaughts have set their goals high.

“Our team’s goal has been to make it to the state tournament for Division 2,” Enyedy says. “In order to do this we have to play well at the regional tournament. There are a lot of good teams we have to compete with in order to achieve this, but we are training hard each day and looking to improve every time we step on the courts. So far, we’ve played okay, we still have work to do to reach our goal but it’s definitely in the realm of our abilities.”

Enyedy says his strengths on the court include his backhand and serves. He also has a nice soft touch around the net. But there is work to be done.

“I still have to work on my forehand, in specific my power, and my offense in general,” he says. “I feel that I have the ability to play tough defense but still need to improve when it comes to finishing points with offense.”

Noah, 16, the son of Julie and Erik Enyedy, has a 4.0 GPA and plans on going to college after high school. But he probably won’t be serving up a tennis career after his time with the Dreadnaughts.

“I don’t really plan on playing tennis after high school (at least at a college),” he says. “The colleges I’m interested in from an academic viewpoint have tennis teams quite a bit above my skill level. That being said, I am looking forward to being able to play tennis casually with family and friends. It truly is a lifelong sport and will hopefully be a nice way for me to stay active throughout my life, even if I’m not playing competitively.”