The Pioneer girls’ cross country team took the top three spots and four of the top five and ran away with the SEC Jamboree 1 on Tuesday at Hudson Mills Metropark in Dexter. The Pioneers finished with an amazing 19 points as all five placed in the top eight.

In any other race, Saline would have “ran away” with the meet but the talented Hornets had to settle for second with 46 points. Speaking of talented, Dexter had an impressive showing by taking third with 81 points.

The Pioneers, the defending MHSAA Division 1 Girls Cross Country State Champions, were led by Rachel Forsyth, who finished second at the state finals last year as a freshman. The sophomore separated from the pack early and cruised over the finish line all by herself with a time of 18 minutes, 37.6 seconds.

Pioneer teammate Emily Cooper, a junior, crossed second in 18:45.7 and senior Sarah Forsyth was third in 19:01.0 to help the Pioneers go win, place and show.
Pioneer sophomore Natalie Mello was fifth (19:18.4) and senior Charlotte Batra was eighth (19:45.1) to round out the scoring for the winners.

The Dreadnaughts were led up front by both experience and youth. Senior Amanda McGill ran an outstanding race and placed seventh overall in 19:26.9. Just two places back was fabulous freshman Alena Blumberg who ran ninth in 20:02.4. 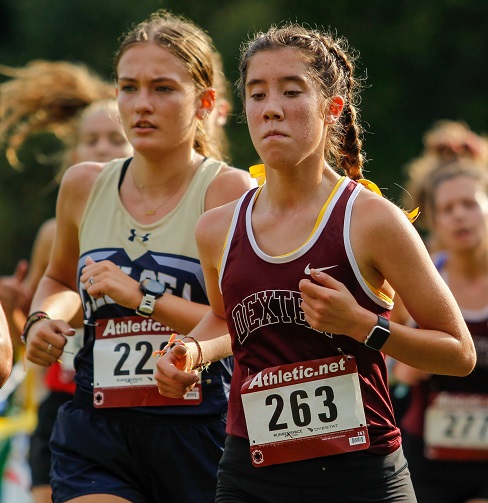 The future looks bright for Skyline as the Eagles landed all underclassmen in their top five. Sophomore Allison Mayer led the way for Skyline as she crossed the finish line in 11th place in 20:09.0. Also cracking the top 20 was junior Natalie Kessler who was 18th in 20:34.9.

The River Rats were led by Lucinda Paliani. Only a freshman, Paliani crossed in 13th place with a time of 20:17.5. Sophomore Sonya Shelgikar also ran well for Huron. She was 22nd overall with a time of 20:53.9. 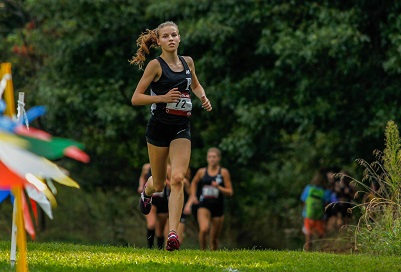