Cal Bavineau knows how to run a team. He’s proven that on the basketball court as the Dreadnaughts’ starting point guard. Now he’s running point on the gridiron, playing quarterback for the first time on Dexter’s talented football team.

The Dreadnaughts came into this season with plenty of returning players and plenty of optimism. The one question mark was at quarterback with the graduation of Colin Parachek, one of the top quarterbacks in the state the past two seasons.

Bavineau helped lead Dexter to a convincing 42-8 win in the season opener and on Thursday night helped lead the visiting Dreadnaughts to their first win ever in the SEC Red Division with a dominating 42-6 win over Skyline. Dexter led 42-0 at halftime and with a running clock in the second half, took their foot off the gas to improve to 2-0 on the season. 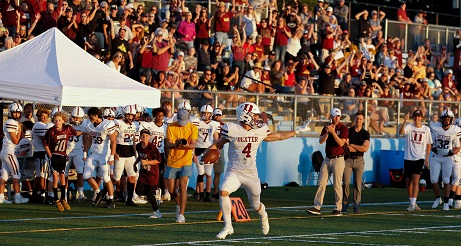 The Eagles (0-2) came into the game following a 41-28 loss to Pinckney in a game that despite the score they showed some promise and potential. But Dexter wasted no time in establishing dominance as they scored touchdowns every time the offense touched the ball in the first half.

Bavineau has a strong and accurate arm and does the one thing coaches love – he doesn’t make mistakes. The senior was 12 of 18 passing for 202 yards and threw a pair of TD passes to senior Braeden Fuson. He also can run and scramble, and shows good judgement on when to pass and when to take off.

Bavineau, a true team player who played receiver last year as a junior, will be the first one to tell you he is surrounded by plenty of talent – both up front and behind him, especially behind him. Only a junior, Cole Cabana is quickly establishing himself as one of the best running backs in the state. He crossed the goal line four times on Thursday, including a 54-yard run, and has crossed the line into elite status after just two games. 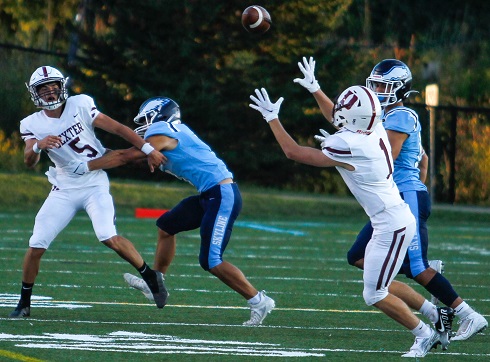 The Dreadnaughts took their opening drive right down the field and scored on a 29-yard TD pass from Bavineau to Fuson. Senior Devon Durliat converted all six extra-point attempts.

Dexter’s Brennan Parachek had a big sack to force a Skyline punt and the offense wasted little time scoring again.

Skyline’s Yannik Berg had a huge kick return but the play was called back on a penalty. Instead of being inside Dexter’s 10-yard line they found themselves at their own 10-yard line.

But Skyline QB Evan Rothenberg hit Berg for a 72-yard pass completion down to the Dexter 8-yard line. A touchdown here could cut the lead to 21-7 and possibly swing momentum. 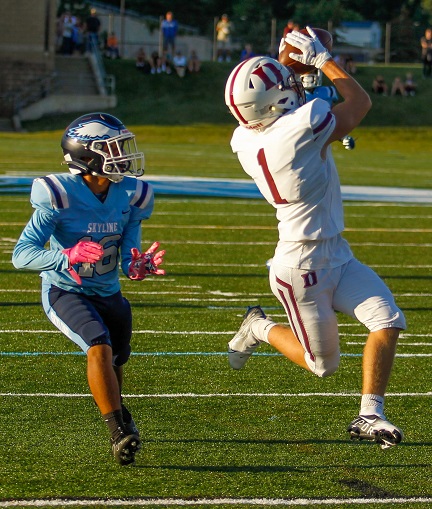 Dexter’s Micah Davis would have none of that. The junior intercepted a fourth-down pass on the final play of the first quarter to help keep the Eagles off the board.

The Dreadnaughts’ defense was outstanding all night long against the Eagles. They were big, fast and determined to keep the home team out of the end zone – which they did in the first half. 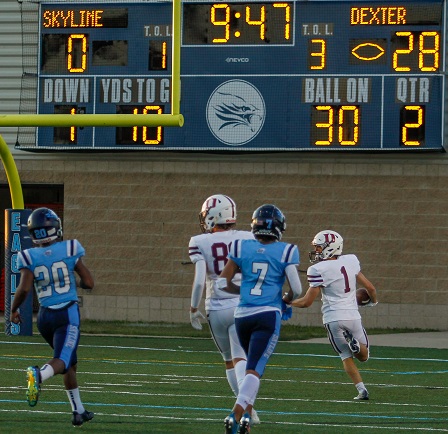