There are some big changes coming in the high school sports scene when the fall season kicks off in just a few weeks. Teams began practicing this week and the return to a full schedule is bringing plenty of optimism and excitement to the gridiron.

One of the big changes locally is Dexter moving from the SEC White to the SEC Red Division in a recent realignment of schools.

The Dreadnaughts will join the three Ann Arbor schools – Huron, Pioneer and Skyline – along with Saline, Monroe, Bedford and Lincoln. The SEC White will feature Adrian, Chelsea, Jackson, Pinckney, Tecumseh and Ypsilanti.

It’s never too early to talk football so let’s take a look at what is coming just around the corner.

Let’s kick things off with the Dreadnaughts, who will be looking to replace one of the best quarterbacks in the state the last few years (Colin Parachek) but have plenty of talent returning. After four seasons of not winning a single game, Dexter has now made the playoffs three straight seasons under coach Phil Jacobs.

While the success has certainly changed the tune of Dexter football, one big item on the to-do list has yet to be checked off. The Dreadnaughts have not defeated rival Chelsea since a 16-5 victory on Oct. 6, 1995. They will get their next shot to end the losing streak on the last week of the regular season when they face the Bulldogs on Oct. 22.

Dexter has a tough schedule in 2021 and it starts off with a challenge. The Dreadnaughts will open with Birmingham Groves. The two teams will meet in the 16th Xenith Prep Kickoff Classic (XPKC) at 4 p.m. on Friday, Aug. 27 at Tom Adams Field on the campus of Wayne State University in Detroit.

The Falcons, who play in the tough Oakland Activities Association, have reached the playoffs eight straight seasons and won two playoff games last year before having to forfeit against Warren Mott.

The Dreadnaughts will face Skyline in week two before facing Bedford in week three on Sept. 10. The Kicking Mules have made five straight playoff appearances. Last year’s scheduled Bedford-Dexter game was cancelled because of COVID.

The Dreadnaughts will face Pioneer on Sept. 24, Huron on Oct. 1 and Monroe on Oct. 8. It’s a tough finish for Dexter with powerhouse Saline on Oct. 15 and then the rivalry game with Chelsea on Oct. 22. 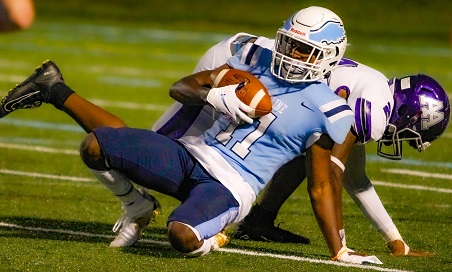 Former Detroit Lions and Nebraska Cornhuskers star Jimmy Williams takes over a Pioneer program that has been looking to reestablish itself among the elite in the area. Despite recent struggles, Pioneer has reached the playoffs in 12 of the past 20 seasons.

Pioneer will open with Anchor Bay on Aug. 27. The two teams have opened the season in two of the last three seasons with the Tars winning both in close games (16-13 in 2018 and 13-7 in 2019). Anchor Bay has reached the postseason just once in the last nine seasons – not counting last year when they went 4-3 and lost to Romeo 20-6 in a District game.

Huron, a program certainly on the rise, will kick off its season on Aug. 27 against Detroit Western. The Cowboys went 5-2 last year and have reached the playoffs four straight years.

The River Rats will then face a familiar foe in week two – the Saline Hornets. Huron, which won its first playoff game ever last year, opened the season (43-19 loss) and closed the season (34-27 loss) in 2020 against Saline.

After Pioneer on Sept. 10, the River Rats face Bedford, Monroe, Dexter, Skyline and Lincoln. They will finish the season against Rochester, a team that went 6-0 last year before losing in the first round of the playoffs.

Skyline will open its season Aug. 27 against Pinckney. The Pirates have reached the playoffs in four of the last five seasons. The Eagles will then play Dexter (Sept. 3), Monroe, Pioneer, Saline, Lincoln, Huron and Bedford.

Skyline finishes the year on Oct. 22 against Tecumseh. The Indians have won just four games in the last three seasons.