Heading into her junior year, Lindsey Wiczorek is really just approaching the net of her high school tennis career. But the 15-year-old has already served up an impressive list of wins, accomplishments and awards.

First, she is first on the Dexter tennis team – as in first singles. Playing one singles as a sophomore for a strong program such as Dexter is an impressive feat to begin with. How good was Dexter in 2021?

The Dreadnaughts were second in the SEC White, won all four singles events and easily took first at Regionals to reach the Division 2 State Finals this past season. They finished 10th out of 21 teams with eight points at States with their No. 1 singles player leading the way.

Wiczorek didn’t let her teammates or herself down this past season. She not only earned the right to play one singles but played like a one singles all season long including against the best competition in the state.

At the state finals, she defeated Wyandotte’s Reese Blackledge 6-2, 6-1 in her opening match. She then defeated Okemos’ Yasmin Booncharoen-Jelassi in straight sets, 6-3, 6-1.

Wiczorek faced her biggest challenge in the quarterfinals against No. 2 seed Romika Shokohi of Mattawan. Despite being unseeded and losing the first game 6-1, the Dexter sophomore came right back to take the second game 6-7(2) before falling 6-4 in a competitive third game.

So let’s talk about the State Finals …

“The State Finals was brand new to me, since I didn’t get to have a season last year (because of the Covid shutdown),” Wiczorek says. “There were amazing teams from all over Michigan that were all there trying to win. Our team knew that there were going to be tough matches ahead of us. We all just wanted to play our best and leave nothing behind. Go down swinging.” 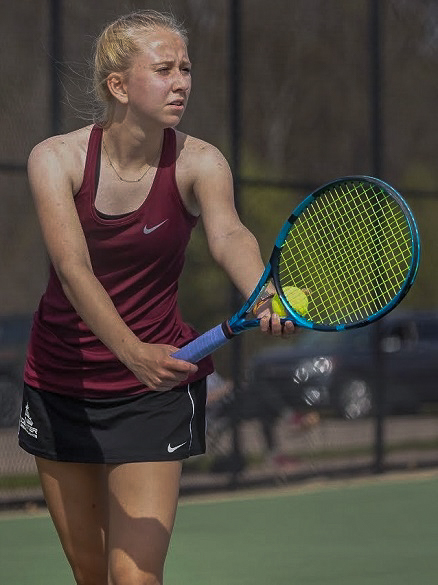 And they certainly accomplished their goal – and then some. Wiczorek admits to being a little nervous when she first walked out onto the court.

“I remember whenever I was up in the game I told myself, ‘they can always come back,’ so I wanted to focus on keeping my game going well,” she says. “In my second match, I was down 0-3 and had to be the one to make a comeback, eventually winning the set 6-3. My first two matches were battles that I was able to pull wins out of.”

Then Wiczorek faced the No. 2 seed, the second-best ranked player in the state at one singles. And she played like the second best player when she won the first set 6-1.

“Facing the No. 2 seed as an unranked player in the bracket, I knew that it was going to be tough,” she said. “I went into the first set with a strategy of trying to have her make more errors than me. When I lost the first set 1-6, I decided to go for more aggressive shots even if that meant I might hit more errors. She was a really strong opponent and I did my best against her.”

Wiczorek certainly gave her a strong game and proved to be a tough out. Reaching the quarterfinals as a sophomore and earning Division 2 All-State Honorable Mention (presented by Michigan High School Tennis Coaches Association) capped off a tremendous season for the Dexter teenager.

“I am really happy that I made it to the quarterfinals as one of only two sophomores in this group of amazing players,” she says. “I was proud of what the team was able to accomplish, and I know we all gave it everything we had to get 10th place at States.”

Lindsey, the daughter of Renee and Glen Wiczorek, started playing tennis when her mom signed her up for lessons when she was 10 years old. “I just started out learning the basics of the sport and then started playing more with my dad during the summers and getting individual lessons,” she says.

She said she initially liked the “power of hitting the ball” with her serves and returns with her forehand. Her strengths on the court include serve return, forehand cross court and approach shot.

“I need to continue to improve my volleys and need more consistency on my backhand,” she says, as she continues to fine-tune an already strong all-around game.

Then there is the other side of the net when it comes to tennis.

“Tennis is a big mental sport,” Wiczorek explains. “I still struggle with not letting my emotions get to me. When you are playing singles, you are by yourself out on the court with your opponent’s team rooting against you. It’s extremely important to stay focused because when you stop thinking things through, your whole game goes down.” 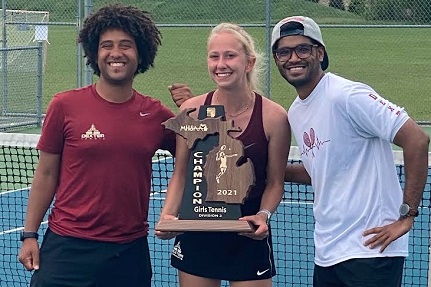 Wiczorek says there were several reasons for Dexter’s overall success on the court this past season.

“I have really enjoyed being with my teammates, breaking down our matches together, and learning strategies from one another,” she says. “We really supported each other and had close relationships. At Regionals, every single flight went into the final round and we ended up winning six of the eight flights.

“Seven of our 12 players had never played an official high school tennis match before this season. Our coaches, Rob Smothers and Anand Patel, were amazing with the team. They never wasted one practice. I definitely think their coaching and tips kept us focused and helped us pull out wins in some tough matches.”

Wiczorek, who plays tennis year-round and takes lessons from “incredible coaches,” would like to someday play tennis in college. But she still has a few years – a lot more matches – to figure that out.