Caleb Drenner couldn’t picture his senior year without rugby in the frame. So when Dexter had to shut down the program because of low numbers, Drenner took his passion for the sport on the road.

That commitment landed him a spot on the Birmingham High School rugby team and it all ended with a state championship. Going from not being able to play for the school you attend to holding a trophy with a new band of brothers was an amazing journey – one filled with lots of miles on the road between Dexter and Birmingham.

But before the perfect ending, let’s start at the beginning.

“My dad played rugby in college and my brother played all through high school,” says Caleb, explaining how he fell in love with rugby. “I started being the ball boy for the team back around seventh or eighth grade. I’ve always been around the sport.” 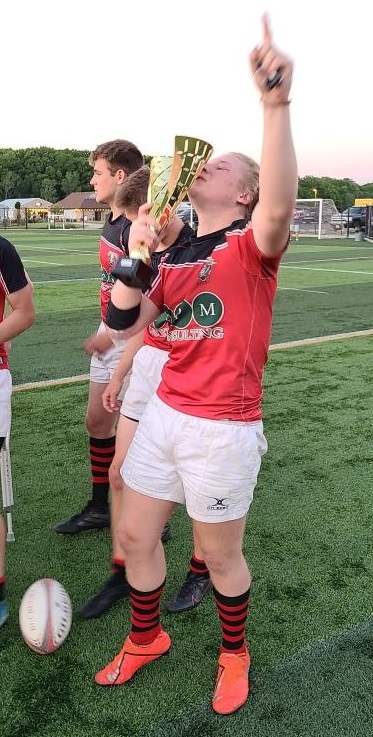 Drenner started playing his freshman year at Dexter and it just kind of took off from there.

“It always seemed like a good pairing while I was playing football, and I really just enjoyed playing,” he says. “The reasons I enjoy rugby so much are because you’re allowed to express yourself more through the way you play. It’s a lot less controlled than football. Anyone can play the sport and there’s positions for all shapes, sizes and ability levels. I think that’s what makes it so special and unique.”

Drenner also has played football since he was in sixth grade. He received All-Conference honors his junior year and was All-Conference and All-State as a senior.

“Up until my sophomore year I always considered football my main sport,” he says. “Then I realized I’m actually pretty decent at rugby. So I devoted a lot of time and effort into practicing rugby, and learning the game, and it’s taken me places I never thought I’d be.”

And Birmingham is one of those places.

“Dexter has had a team for a long time,” Drenner says. “My brother played for them until he graduated in 2016, and I played for Dexter from my freshman to junior year. But COVID cut our season short my junior year, and this year we just weren’t able to put a team together because the interest and numbers just weren’t there.”

So Drenner hopped a ride for Birmingham, a longtime powerhouse in high school rugby before going through some rough stretches more recently. And Birmingham and Dexter actually had quite a rivalry going for many years prior to Drenner starting high school.

“I ended up playing for Birmingham this year,” he says. “I followed them on Instagram, then asked if I was able to play for them and they said yes.

“I traveled to Birmingham two to three times a week to practice, which was about two hours round trip, and I didn’t regret a second of it. I hope to keep in touch with the guys I met up there for a long time. We really created a brotherhood, and I think that’s one of the big reasons why we ended up winning the 10’s state championship this year.” 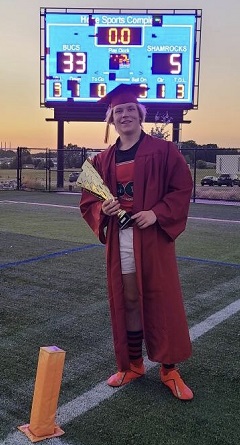 Drenner, 18, had a difficult choice on June 4 – attend Dexter’s high school graduation ceremony or play in a state championship rugby game. Well, it wasn’t really that difficult of a decision.

“Winning the state championship was one of the most amazing things I’ve ever been a part of,” he says. “I skipped graduation to help my team take home a trophy and that’s exactly what we did. Our team was made up of a lot of really good athletes. We had kids that wrestled, played soccer, ran track, played football, and kids that don’t play any other sports. But I think the reason our team was so good is because we all came together and really created a group of people we could count on.”

Drenner received a rugby scholarship and will be attending Lindenwood University to play Division 1 Rugby in the fall.

“I picked Lindenwood because the campus is amazing, I loved the city of St. Charles and how close it is to St. Louis,” he said. “The business program at the school is top notch which is what I plan on studying. And also because Lindenwood is a powerhouse in collegiate rugby. This opportunity is once in a lifetime and I plan to make the best of it.”