Noah Schultz was a runner-up at the MHSAA Track and Field State Finals earlier this month, but the Dexter athlete puts things into perfect perspective when he talks about accomplishments and highlights from his senior season.

“A key highlight from this past year would be just having a season this year,” he says. “To miss last season (because of the COVID shut down) hurt more than many might think, at least for myself. I had gotten sick the winter before our cancelled spring season and had been trying to build back what I had lost while sick. I was finally starting to get back to the place I had been before I was sick and that’s when everything got shut down.”

With no shutdown this season, Schultz took off and was a key member of a very successful Dexter track and field team.

“I improved my personal record after missing out on last season and qualified for Nationals this year,” he said. “At the beginning of this year I started with a personal record of 14 feet, and by the end of the year, I had improved by a foot and 3 inches, ending with a PR of 15 feet, 3 inches.” 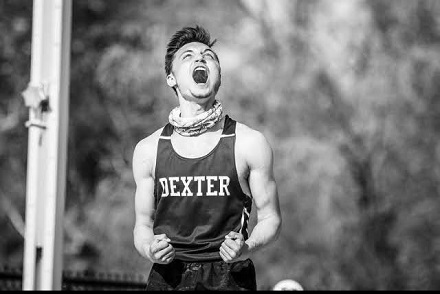 That 15-3 vault landed him second at the Regionals at Saline and sent him to the Division 1 State Championships on June 5 at East Kentwood High School in Grand Rapids. Schultz went 14-9 at States and finished second behind teammate Cole Sheldon (15-03) as the Dreadnaughts landed 1-2 overall.

Schultz, who also was runner up to Sheldon at the SEC league meet, finished first in three events this past season. He was second in seven events and finished no higher than third just once (Larry Steeb meet).

He ended his sophomore year with a PR of 14 feet and finished 14th out of 47 competitors at the MHSAA D1 State Meet.

“I got interested in pole vault because my mom (Kathleen Schultz) told me one day she had signed me up to go vault,” he says. “And after getting up to a 9 foot bungee on my first day I thought I could be pretty good.”

He thought right. And is one of many outstanding pole vaulters under the incredible guidance of longtime coaches Geoff and Janell Gerstner.

“There really is only one answer to why Dexter has been so good in pole vault over the years,” Schultz says. “And it’s our coaches. Without them Dexter would not have the success it has had these past many years.” 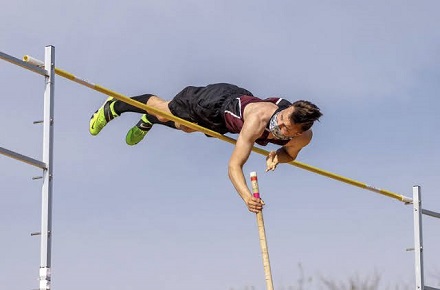 The success also comes down to hard work and dedication. And the Dreadnaughts thrive in that area.

“Each season the training looks a little different,” Schultz says. “For example, the spring season we have practice six days a week and in the summer and winter it’s more like two or three days.”

Schultz also ran cross country in the fall for the Dreadnaughts. Dexter ended up 15th in the Division 1 State Finals with 380 points.

Schultz plans to continue his pole vault career next year at Indiana Tech.