A few hours after Paula Palmer Burns was named head coach of the Dexter volleyball program she sent out an email to players, parents and support staff of the program. One of the messages was, “things will be getting up to speed fast.” And if you know Palmer Burns, “fast” means pedal to the medal, fifth gear and full-speed ahead.

Whether she is president of the Dexter Area Chamber of Commerce, running Palmer Insurance, coaching the Team Detroit Volleyball Club or “playing” mom to four amazing young ladies, Palmer Burns is ALL IN. She will set, dig and spike the Dreadnaughts to another level – and this program has been at a pretty high level for the last several years.

Needless to say – and not surprising if you know her – Palmer Burns is pretty pumped up for this “special and exciting” opportunity.

“I am so excited to continue to build on this amazing foundation in our program,” she says. “I am looking forward to the new challenge of moving to the SEC Red Division for our athletes. Coaching is the most rewarding ‘job’ I have ever had. I love being part of the big and small moments that shape someone’s journey – in sports, but also in everything that applies in our futures. There are learning the skills needed, realizing the significance of effort and intention, finding lessons in victories and losses, going beyond what you thought was possible, being inspired to reach for more than what you’ve already accomplished.” 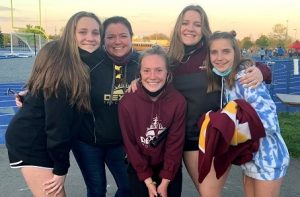 Yeah, she is clearly pumped up! And it sounds like she won’t have any trouble getting her players pumped up.

“I absolutely believe that through inspiration, dedication, and perseverance that anything is possible, and I want to share that with the athletes that are part of our program,” she said.

Palmer Burns, 45, played volleyball for Dexter High School (1990-93) and helped lead the team to a few District titles. She started coaching the sport she loves right after college. She has coached with several clubs (12U, 14U, and 16U levels) and coached the Dexter JV team for the last six years. And she currently coaches a national team at Team Detroit Volleyball Club.

“I believe that team sports have the opportunity to support, train, and nurture athletes into well-rounded, good humans that are leaders and role models,” she says. 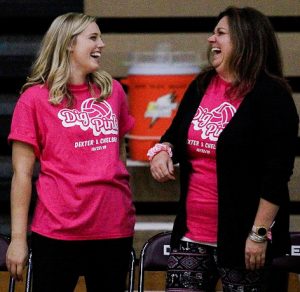 So, we know the answer to “why here,” but why now?

“Ideally, I was hoping to wait at least another year,” she says. “Then my non-volleyball kid – who plays field hockey during the same season – would have graduated and eliminated one conflicting schedule in our household. I also loved coaching with both D’Ann Dunn and Liz Melvin. I am so proud of the program and culture that I have been part of through both their tenures here. I was always hoping to return to a varsity position and grateful for this opportunity at Dexter.”

The non-volleyball “kid” is Gracie, who will be a senior this year and helped lead Dexter to a state title in field hockey. She already has accepted an offer to play field hockey at Michigan State.

The rest of Palmer Burn’s roster includes twins Lily and Lana (sophomores next year at DHS) and Chloe (who will be in eighth grade). The three all play volleyball – just like their mom did.

“I fell in love with volleyball in seventh grade,” she says. “I was beyond blessed to share the love of the game with my sister who coached in the Traverse City area and I strive every day to have a positive influence in my player’s lives as she did.”

Written By
Terry Jacoby
More from Terry Jacoby
Did you hear that? Even in the dead of winter with everyone’s...
Read More