The Dexter golf team reached the state finals by taking the third spot at Regionals by just one stroke, so the Dreadnaughts were certainly glad to be part of the field this past weekend at the Lower Peninsula Division 1 State Finals.

Dexter shot a team score of 670 to finish 16th overall on the challenging Forest Akers West course in East Lansing. The Dreadnaughts carded a 331 on Friday and then shot 339 on Saturday.

Fellow SEC team Skyline landed four players among the top 25 and carded a team score of 594 to win it all as the Eagles, ranked No. 1 to start the season, went wire to wire. 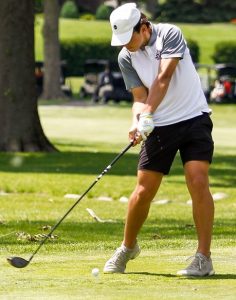 Detroit Catholic Central was second (603) followed by Traverse City West and Forest Hills Northern (each at 613). Brighton was seventh (620 and Saline was 17th (671) in the 18-team field.

Brighton’s Davis Codd was the top individual player with a 140 (73-67). Three players tied for second overall with a 143 including Skyline freshman Leuan Jones (71-72).

Written By
Terry Jacoby
More from Terry Jacoby
The Dexter volleyball team has set a strong foundation for a big...
Read More