The Dexter track and field teams competed at the Division 1 State Championships on Saturday at East Kentwood High School in Grand Rapids. The weather played a big role in the times and distances as high winds had a big effect on most of the competition.

The SEC also shined on the boys’ side of the track with two teams finishing among the best in the state. Fenton and Rockford tied for first with 34 points followed by Zeeland West (30), Skyline (28) and Pinckney and Novi (25 each). Dexter and Macomb Dakota tied for seventh with 24 points.

The Dreadnaughts had a track full of outstanding performances and it started in the field events. 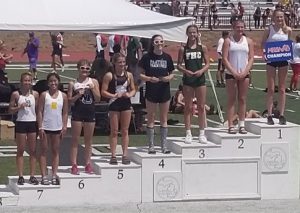 Dexter pole vaulters shined brightest with both the boys and girls dominating. On the boys’ side, junior Cole Sheldon was the state champion with a vault of 15 feet, 3 inches. Right behind Sheldon was senior Noah Schultz, who placed second with a jump of 14-9.

The girls were equally as dominant. Junior Sophia Mettes (above) was the state champion at 12-6, and her sister, senior Josie Mettes, took second at 12-3.

Other state qualifiers were seniors Makenzie Stock, finishing 10th at 10-9, and Abigail Van Noord taking 17th with a jump of 9-9.

Another strong performance was from first-time state qualifier (and first-year track and field athlete) Jamie Giese, who finished 18th in the shot put with a throw of 35 feet, 4.5 inches. 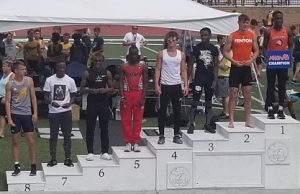 On the track, Dexter’s Cole Cabana (right) was the featured runner. The speedy sophomore made the finals in both the 100m and 200m. Strong headwinds had a huge effect on the final times as Cabana finished fourth in the 100m with a time of 10.97 seconds.

Senior distance runner Conor Kolka finished his career at Dexter with a solid performance in the 3200m, with a time of 9:46.31.

Going into the last event of the day, the boys 4x400m relay with Wilson Kasischke, Micah Davis, Cabana, and Nathan Gariepy ran 3:29.20. It was a little off the pace from their qualifying mark, but no doubt the heat and winds of the day took their toll on the relay team.