Two months ago, the prospect of even having a high school basketball season seemed in grave peril.

Flash forward to the present, and not only was Dexter basketball able to compete on the hardwood, it won the district championship Saturday after defeating Ann Arbor Skyline, 56-37.

Dexter second-year head coach Jason Rushton said the team was hard at work even when the status of high school basketball in Michigan was unknown.

“Our seniors got everybody together virtually and we were working every day,” Rushton said. “We were running, by ourselves but together, we were doing tabata separate but together two days a week, and that’s starting to pay off now.”

Dexter’s hard work certainly does seem to be paying off. After starting the season 0-2, the Dreadnaughts have righted the ship, winning 16 of its last 17 games.

Saturday, Dexter showed just how far it has come. Ann Arbor Skyline, who knocked the Dreads out of the playoffs in the district semifinal last year, looked primed to give Dexter fits with its size advantage and stingy zone. Instead, Dexter shattered Skyline’s zone into 56 pieces and held the Eagles under 40 points. 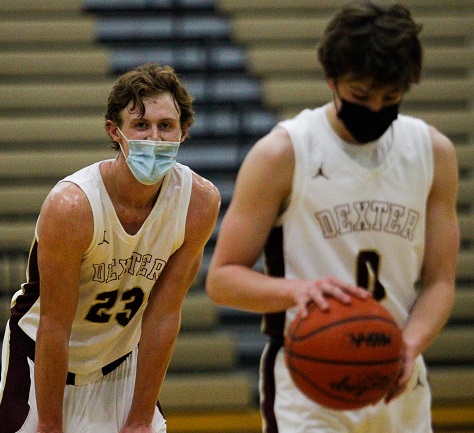 “We saw it [Skyline’s zone] against South Lyon East and South Lyon as well,” Bavineau said. “We’ve seen them run it and I think studying it and making sure everyone knows their job, so going over that before the game in practice was how we beat it.”

Saying that Dexter has had a good season would be a gross understatement. The Dreads have had a banner season, winning the school’s first district championship in men’s basketball since 2006.

Dexter also won the Southeastern Conference White Division title, clinching that in its regular season finale in a 62-46 win over rival Chelsea. The last time Dexter won both a conference championship and district championship in the same season was 2004. The coach of that Dexter squad was none other than Mike Bavineau, Cal’s father, who is currently Dexter’s athletic director.

Cal said that leading the Dreads to a district championship as its point guard has been an awesome experience.

“They make it easy; they do the job. They’re great players, we have so many great players surrounding me, it’s awesome,” Bavineau said.

While Dexter has certainly accomplished a lot this season, Rushton said he believes the team’s best is yet to come.

“We continue to get better every day, so tomorrow is another day, another opportunity that we’re thankful that we can be together in the gym, and we’re going to take advantage of that and get better. Tuesday’s our next [game], so I’m hoping we’re better Tuesday than we were [Saturday],” Rushton said.

Dexter will need to be at its best Tuesday, as it faces its toughest task: a regional semifinal showdown with state powerhouse Ann Arbor Huron (16-0), the No. 2 team in Division 1 from the Associated Press rankings.

Rushton acknowledged Huron’s talent and its overcoming adversity, but said Dexter will be ready to compete.

“It doesn’t matter who the opponent is, we’ve been facing it all year. I feel like we’ve been overlooked throughout the whole year, and we’re not really worried about what number Huron is ranked, it’s just another opportunity for us to compete,” Rushton said.