Jillian Eggleston spent many hours growing up at a hockey rink so it was only natural that one day she would jump out on the ice and play the great game of hockey. Her love of the game started early and it would “stick” all the way into high school.

Eggleston, 16, is a junior at Dexter High School and a member of the Washtenaw United, a high school girls’ hockey team that skates out of the Ann Arbor Ice Cube that serves players from Saline, Dexter, Chelsea, Manchester, and Milan. The team is in its first year of play, and is an affiliate member of the Michigan Girls High School Hockey League (MGHSHL) with plans of full membership into the league for the 2021-22 season.

The United are having an amazing season – especially for a first-year team – and Eggleston is having a blast. But first, let’s skate back to the beginning on how she first discovered hockey.

“We have a pond in our backyard, so I first learned how to skate there,” she says. “I also have two older brothers who played hockey, and I spent a lot of time at the rink watching them. Eventually, with the encouragement from other girls my age at the rink, I decided to join a team and learn how to play as well.” 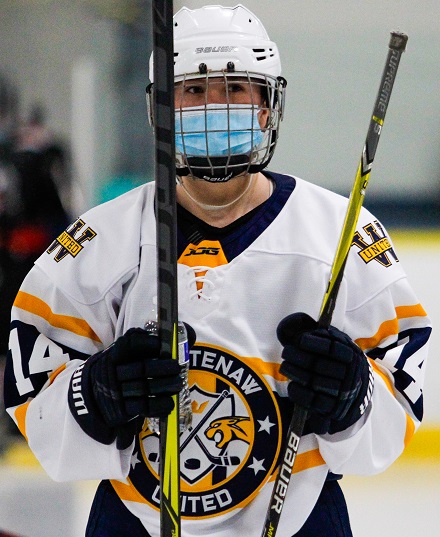 Eggleston started playing travel hockey with the Ann Arbor Cougars and last season played for Belle Tire U-19 out of Taylor.

“I have always enjoyed playing travel hockey,” she says. “It is competitive and you get to travel around, playing different teams from all over. Playing travel hockey has made me the player I am today. It made me a better skater and taught me many skills.”

As for positions, Eggleston focused on the defensive part of the ice. She says she likes the battles in front of the net and in the corners and helping keep a clean sheet.

“It’s rewarding when you prevent the other team from scoring, and often gives you a rush of adrenaline,” she says. “It can be scary, but when you give it your all, and have good outcomes, it’s exhilarating.

“The challenging part is you need to be aware of what is happening on the entire ice and anticipate the next moves in the defensive and offensive zones.” 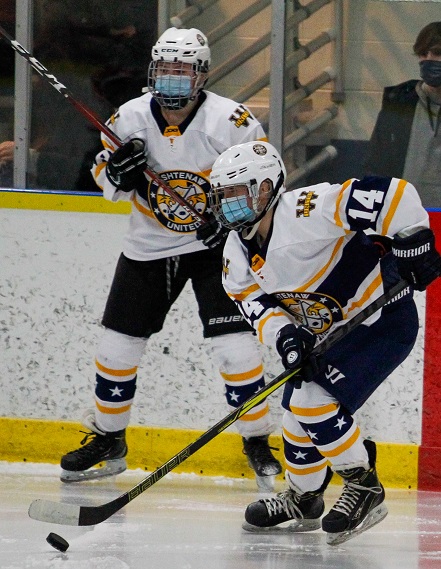 Eggleston heard rumors about a team in Washtenaw County for players who went to schools that didn’t offer girls’ hockey. She says she was worried there wouldn’t be enough players to field a team

“I was contacted by a former teammate who said she was going to play and that there was an upcoming meeting with the coaching staff,” she said. “Thanks to the coaches and their hard work, there was a great turnout of players and I was excited to join the newly formed team.”

It would be near impossible for Dexter to have its own team because there aren’t enough girls interested in playing hockey. Eggleston hopes that someday the Dreadnaughts can lace up a girls’ hockey program.

“I hope other girls see us and our sport and become encouraged to want to learn to play, and maybe someday Dexter could have its own team,” she says.

Eggleston says playing for the United is “fun,” especially with school being mostly remote.

“It’s nice to get on the ice with my teammates a few times a week, it brings a little normalcy to my week,” she says. “Everyone on the team, including the coaches, are very close to each other.”

Julia Berkholz and Raegan Kopitsch also go to Dexter HS and play for the United.

“The girls are all great,” says Eggleston. “Raegan, Julia, and I go to Dexter, the rest of the team consists of girls from other schools in Washtenaw County. We all get along well, and enjoy being around each other playing hockey. Although it has been an odd year, on and off of skating, we quickly formed a tight bond and became close.” 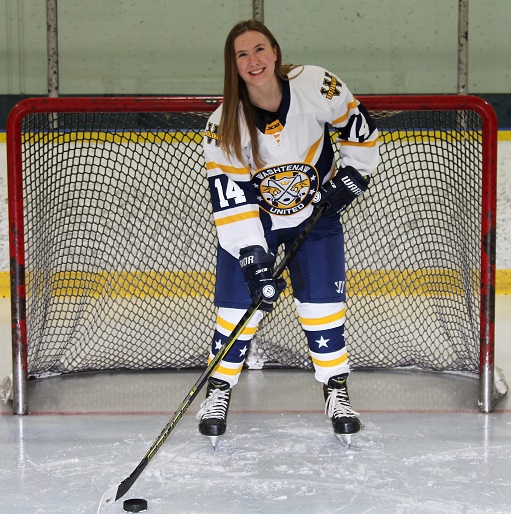 They also are having a very good season and have either won or been competitive in every game they have played. “We want to represent our team well on and off the ice and develop as players,” Eggleston says. “We want to be a respected program that encourages girls to come play and watch. We want Washtenaw United to be around for years to come.”

Jillian, the daughter of Tim and Wendy Eggleston, has a 3.97 GPA at Dexter and is a member of the Women in Science Club. Only a junior, she still has some time to figure out her future plans.

“I am beginning to explore college options,” she says. “I’m not planning on going to college to play hockey, but if I have the opportunity to try out for a club team, I would love to continue playing.

“Hockey will always be part of my life whether I play after high school or not. I have made many great friends from all over and it’s a great experience being a part of a team.”