The Dexter varsity dance team performed under the bright spotlight and let’s just say they shined. The team participated in the Pistons Classic Competition on Saturday at Little Caesars Arena and were spectacular.

The Dreadnaughts won the Pom Division, took second in the Jazz Division and brought home the highest overall score in the Small Varsity Team Division. So, yeah, they certainly shined.

“Although our season has been unique, we have pushed through and made it the best it possibly could be,” says Ryers. “In a normal season, we would attend a camp during the summer at a college campus. This year, we did a home camp with the help of our friends at The Dancer’s Edge Studio in Dexter.”

They also would attend several in-state UDA regional competitions. They did get to attend one virtual UDA competition on Feb. 15 where the Dreadnaughts placed third in the Pom Division out of 13 teams and sixth in the Jazz Division of 12 teams.

The team is looking forward to attending the annual University of Michigan Dance Competition on March 14. This will be their last regulation-season competition. The event is typically held at Crisler Arena but because of COVID restrictions, the competition will be held at the Ann Arbor Marriott Ypsilanti at Eagle Crest.

“We are thankful that the event will get us back to a more normal experience even though it will be held in a different location,” Ryers said.

Once Dexter completes its regular season, the team will refocus its sights toward the UDA National High School Dance Team competition on March 21.

“Again, the attendance of this competition will be out of the norm for us this season,” Ryers said. “Normally, we travel to Orlando, Fla., and compete at Disney’s ESPN Wide World of Sports complex. This year, we are going to be a part of the same national competition, however, we are going to be one of the teams from all over the United States that attends virtually. Typically, there are well over 80 teams that earn a spot to compete in our division at nationals. We will find out how we stack up in April.”

The Dexter varsity dance program is already planning the 2021-2022 season! The team will host tryouts the first week of May. They are looking forward to adding a JV team. 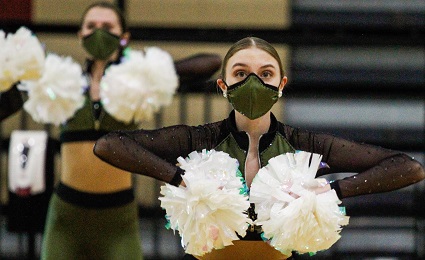 For more information on the team, contact Coach Ryers at coachryers@gmail.com