Zachary Norris isn’t about to forget March 12, 2020 – a day that was supposed to kick start a great ending to another Dexter boys’ swimming and diving season that was grounded before a single splash or stroke. And it not only came as a surprise but happened at the last minute.

“The day (March 12) we heard the state meet was cancelled was a hard day,” says Norris. “We had just gotten to the hotel and were just getting settled. I was extremely disappointed with the cancellation of the meet and I felt terrible for the seniors not being able to swim their last high school meet.”

The Dreadnaughts were swimming into the Division 2 state meet at the Holland Aquatic Center with plenty of confidence and high expectations. Then, it all stopped – before it ever got started. The Michigan High School Athletic Association, which had already shut down the finals for spectators, declared that all high school tournaments, including the boys’ swimming and diving state championships, would be postponed indefinitely. And “indefinitely” soon became forever.

“It was a very emotional day, but we hung out at the hotel and worked through the emotions as a team,” Norris remembers. “Everything was great going into states. We had a solid group of people. I felt like I was going to actually score some points at states and drop a lot of time in my events. We all trained so hard to have it just taken away.”

This season hasn’t exactly gone as scheduled, either. But unlike contact sports, swimming was allowed to jump in the pool in January as the Dreadnaughts opened the season on Jan. 28. Norris, now a senior, and the Dreadnaughts are dealing with the challenges the best they can.

“I was getting into the pool months before this season to prepare for the shorter time,” said Norris, who ran into his own set of challenges. “However, I unfortunately dislocated my left shoulder while snowboarding, putting me out for at least four weeks of an already short season. It made me really disappointed because I didn’t get to show my full potential last year and I don’t think I will have enough time to show it in this season.”

Norris is starting to find his stroke. In this past weekend’s tri-meet at Milan, Norris raced to a D-2 state-cut time of 21.89 seconds to win the 50 free. He also was a member of the medley relay and 200-free relay which both recorded state-cut times.

Dexter also improved to 8-0 on the season and Norris isn’t surprised at all by the team’s success out of the gate.

“Everyone on the team is dedicated to the sport and Coach Mchugh’s training plan,” he says. “Because the training is hard I think it brings the team closer together and really creates a strong bond with your teammates. This year Clayton Kinnard, a former state team member came back to swim his senior year and this gave our team a lot more depth. We still have some amazing returning swimmers from last year in all of our classes including diver Cole Warren who I believe can win states this year.”

Norris was named one of the team captains this year.

“When I got voted as one of the team captains I felt honored because of the amount of traditions this team has and what I can do to keep those traditions going,” he said. “I like to think I lead by example and hard work especially this year because of COVID I don’t get to interact as much as I would have last year with the team. But because of this I still work hard and try to be a good influence on the younger swimmers.” 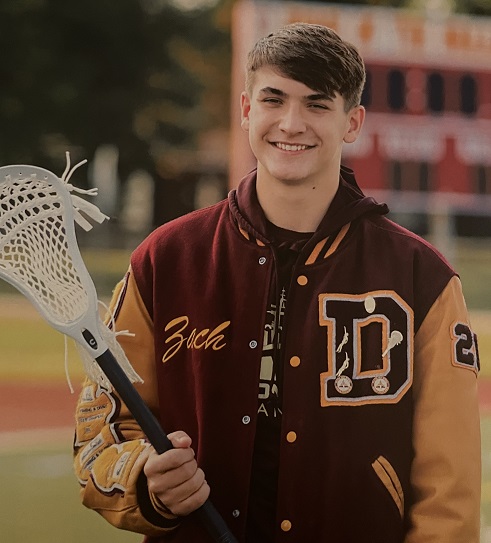 As a freshman, Norris swam the 500 free and ended up missing the state cut by only 6 seconds. The following year, he qualified for states in the 200 IM and the 100 backstroke. He ended up getting 18th in the IM and 33rd in the back.

“My goal for the last two years is to take down the 50 freestyle time on our pool board because it doesn’t belong to Dexter,” he says. “To accomplish this I have to keep working hard while my shoulder recovers and keep my mindset positive.

“Our team goal this year is to win the SEC and beat Pinkney. Last year we shared the SEC title after we beat them at Wylie but lost to them at SECs. The key to this is the dedication of everyone on the team to get faster.”

Norris, 18, started swimming club for DCAC when he was in kindergarten. He said club swimming gave him passion for the sport. “This club has been important to me because it allowed me to keep swimming throughout my entire life,” he said.

Zachary, the son of John and Sharon Norris, also played football and is an excellent lacrosse player.

“My college plan is to attend Trine University in Angola, Ind., to study mechanical engineering,” he says. “I also plan on continuing my athletic career playing lacrosse. I liked this school because I was looking for engineering opportunities and when I visited the campus, it was a great fit. I liked the school and the people.”

But before Norris turns the page on swimming, he has a few more goals to check off and hopefully this year he gets the chance.

Written By
Terry Jacoby
More from Terry Jacoby
Yes, the Dexter-Chelsea rivalry certainly carries over to the diamond and both...
Read More