Dexter senior Colin Parachek has had his fair share of success on the football field.

On Monday, he accomplished a career best on the basketball court, scoring a game-high 31 points in Dexter’s 61-45 road win over Southeastern Conference rival Chelsea. If the 31 points weren’t enough to “grab” your attention, he also grabbed seven rebounds.

Fun fact: Parachek’s 31 points were more than the whole team scored in their 27-19 win Saturday at Lake Orion.

More importantly, this win moves Dexter to 3-2 overall and 2-1 in the SEC White Division, and handed Chelsea its first loss of the season (5-1, 2-1 SEC White).

“That was a huge win, a conference win we really needed,” Parachek said. “Chelsea’s a strong team in this conference and our goal is to win the SEC.”

To put Parachek’s dominance in perspective, the next highest scorer was Dexter sophomore Evan Haroldson, who finished with 15 points in his own strong showing. No player from Chelsea eclipsed 10 points on the night.

“Colin Parachek is an unbelievable locker room leader, and unbelievable in leading us on the court,” said Dexter head coach Jason Rushton. “He’s just a guy that’s got no quit and just refuses to lose. For him to lead us tonight is very fitting given the type of kid he is.” 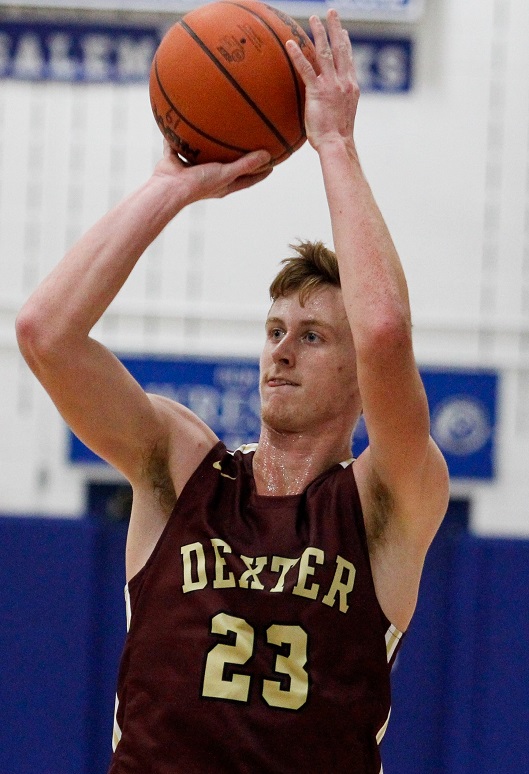 Dexter heavily relied on Parachek’s leadership – and points – down the stretch as Chelsea closed Dexter’s once double-digit lead to six late in the fourth quarter. Parachek scored 14 points in the final quarter, including 10 points in the game’s last 3 minutes.

“We know Chelsea’s a great team that can come out at any time and make shots and comeback, so we emphasized holding the lead and keeping them under 50 points,” Parachek said.

Dexter point guard Cal Bavineau was particularly effective in dishing the ball to Parachek down the stretch. Bavineau added 10 points of his own, including a three-pointer as time expired in the third quarter to grow Dexter’s lead to double digits. Bavineau, a junior point guard, also had five assists.

“Cal [Bavineau] and I have been really good friends since grade school, and spend nearly all year together between all sports,” Parachek said. “It creates a chemistry you cannot teach that showed tonight.”

Dexter came out clicking on all cylinders, playing its usual suffocating defense. On Monday, the Dreads turned that defense into points on the offensive end. One such instance was a block from Sam Sterlitz that led to a layup for Parachek, giving the Dreadnaughts a 9-3 lead late in the first quarter.

“Hats off to them [Chelsea], they’re a young team and they’ve been scoring some points,” Rushton said. “But I thought our defense came at it tonight and this was a big statement for us.”

Haroldson scored five points for Dexter in the quarter, leading the Dreads to a 12-8 lead at the quarter’s end.

Chelsea took the lead early in the second quarter, thanks in large part to solid defense of its own and strong shooting from Lucas Hanifan and freshman point guard Joseph Cabana. Hanifan scored nine points alone in the quarter and finished with a team-high 10 points.

Dexter reclaimed the lead with a 9-2 run before halftime, with Parachek and Bavineau combining to score all nine points. Dexter led 27-21 at halftime.

A pivotal point came in the third quarter, when Rushton was assessed a technical. Chelsea’s Jordan Fansler, who finished with 10 points for the Bulldogs, converted two free throws to cut the Dreadnaught lead to 27-25.

Rushton said he was assessed the technical for arguing the MHSAA’s masking protocols, which have generated controversy in the early stages of the season.

“We’re teaching our guys to play the right way and keep their masks up, so we don’t lose the season,” Rushton said. “Playing with a chinstrap enhances your ability to breathe a lot better. Hats off to our guys for fighting through it and keeping our masks up and being in shape to be able to withstand that.”

The technical seemed to ignite the Dreads, who responded with a 13-3 run, capped with a three-pointer from Parachek that gave Dexter its first double-digit lead of the night, 40-28, with 1:39 remaining in the third quarter. Dexter led 43-32 going into the final quarter after Bavineau nailed a three at the buzzer.

The closest Chelsea came in the fourth quarter was six points, after a Dexter turnover and a three-pointer from Matthew Blanton. Dexter finished the Bulldogs off with a 12-2 run that fittingly started with a block from Sterlitz and a perfect pass from Bavineau that led to a Parachek layup.