Getting ready for this upcoming season – a very promising one, indeed – was a bouncing ball for Alayna Babut and the Dexter girls’ basketball team.

“Preparing for this season has been more difficult compared to last year,” says Babut, one of the senior leaders on this year’s Dexter varsity team. “Our pre-season was pretty on and off. We would get to see each other for a while, and then things would get shut down again. We were so used to seeing each other almost every day in previous years, so now that we are finally playing together again it feels great!”

After a sluggish season-opener loss, the Dreadnaughts have found their groove and have won three straight. This is a very talented, well-coached and hard-working group with an excellent mix of veterans and youngsters all eager to take this program to the next level.

“Most of us have been playing together for a really long time, so we know what everyone’s strengths are and what we need from each other encouragement wise,” Babut says. “We are really close knit! Everyone comes to practice with a positive mindset and we are all just happy to be playing together. It’s a really fun and positive environment.” 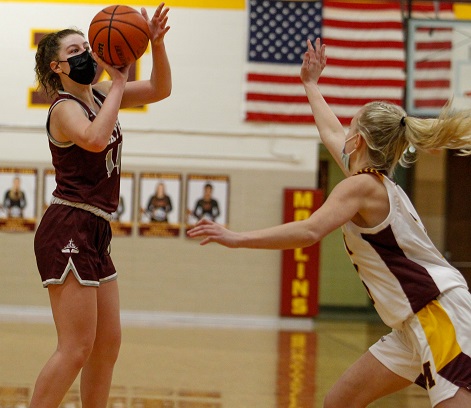 The 6-foot Babut is a small forward who brings plenty to both ends of the court. In her third year on varsity, she is experienced and playing with confidence in the early part of the 2021 schedule. She also shoots around 40 percent from the field, which is rare for a post player.

Babut had 12 points for Dexter in the recent win over Notre Dame Prep so she can score when the team needs points on the board. She is one of those players who can rebound, defend and do whatever is needed to get the game into the win column.

“My personal goal is just to help my team in any way I can,” she says. “We have some pretty high expectations that we can definitely achieve if everyone works together. One of our goals is to win SECs again, which I think we can do.”

Dexter won the SEC White Division last year and Babut said that’s when the Dreadnaughts fully realized how good they can be.

“We are capable of accomplishing everything we want to if we stay positive and work together.” 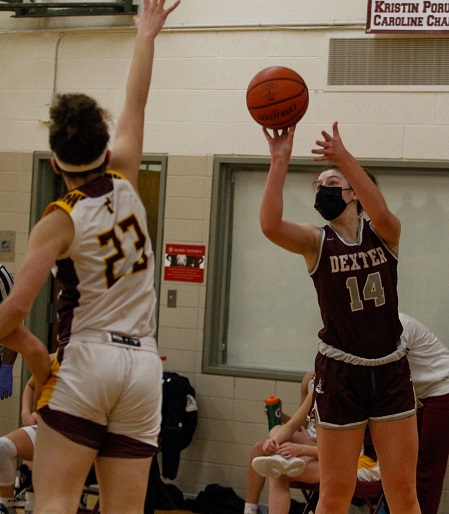 Alayna, the daughter of Scott and Stacey Babut, also is accomplishing everything she wants in the classroom. A Scholar-Athlete Award winner last year, she has a 3.9 GPA and is in the National Honor Society.

And she keeps quite busy. She officiates Rec & Ed basketball games, plays travel basketball and enjoys spending time with friends and family.

Babut says this isn’t exactly the senior year she envisioned but is doing the best she can dealing with the changes and challenges that have come in 2020-21.

“We’re all finding ways to make the best of it,” she says in her typical positive attitude. “I’ve been able to take some college classes this year because of the virtual setting, so I will have some credits done when I go to college.”

And that college is right down the street.

“U-M has been my dream school for as long as I can remember,” she says. “Once I got the opportunity to go there I really didn’t have to think about it. I already knew what I was going to do.”

What she wants to do right now is help the Dreadnaughts dribble their way to an SEC title and beyond. So far, the ball is bouncing in the right direction. 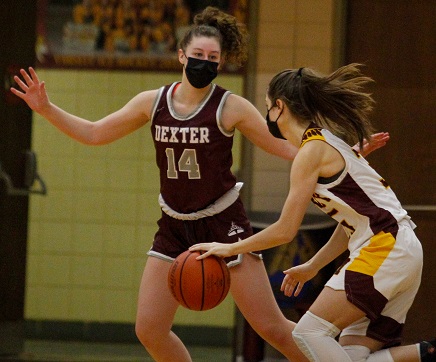 Girls Basketball: Dexter races past Adrian to improve to 4-1; Chelsea next