It’s been a strange year for sure, and it’s been the unknown that has thrown many people for a loop. At the end of 2020, high school athletes were left in the unknown about whether they would even be allowed to play and it’s not a very pleasant place to be.

“This season has been difficult to prepare for not knowing when the season would start, or what it would look like once it started,” says Dexter senior swimmer Leo Varitek. “Preparations for this season have been a lot more mental than physical, due to the fact that there would not be as much time to reach my goals, and times would not be as good as they were in years past.”

So far, so good for Varitek and the Dexter boys’ swimming and diving team. The schedule has started and the Dreadnaughts are 5-0 on the still young season.

Varitek, a senior captain this season, describes his Dexter teammates at “resilient.”

“They have had to put up with so many strange circumstances, and have still managed to have a good time and put up some quick times in meets this season,” he says. “I just hope in the future they can maintain the fun traditions we had in the past after an unfortunate season.” 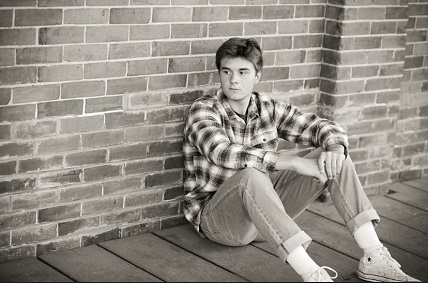 That unfortunate season was last year and left Dexter and the rest of high school swim teams in Michigan on the pool deck as the State Finals were cancelled at the last minute. Varitek, to say the least, was disappointed not to get a chance to compete against the best in the state on the sport’s biggest stage.

“Leading up to states, I was able to swim my personal best times and everything was pointing toward a successful state meet for me,” he says. “This was likely the first year I was going to score points at the state meet (place top 16), and when I heard it was canceled it was obviously disappointing knowing that I was not going to get a chance to swim my fastest.”
Dexter went 10-8 last year and have won six straight (4 outright, 2 shared) SEC White Division titles along with five State Titles since 2012. 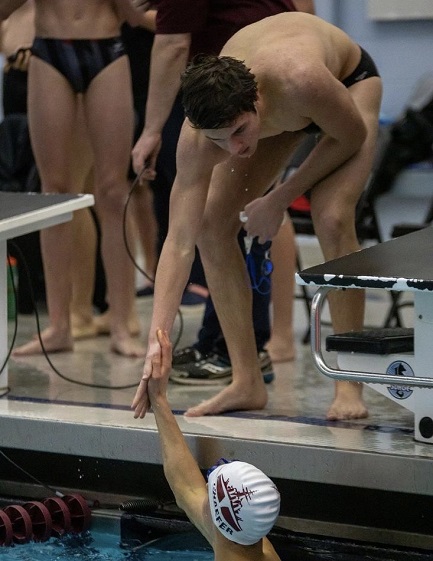 Varitek, 17, says the winning culture at Dexter begins at the top.

“First and foremost, the brutal workouts that Coach McHugh puts together for us are the biggest factor as to why the program has been as successful as it has been,” he says. “Secondly, I believe the team atmosphere is another reason for success. It gets pretty difficult to maintain focus after months and months of non-stop work, but all of our team’s shenanigans keep us going even in the toughest times.”

The Dreadnaughts hope to swim to another SEC White Division title and place top five in the state. “This year, it is more important than ever that we put in the work to take back our SEC title,” Varitek says.

“This season my goal is to score (place top 16) in my individual events at the state meet this year, and since our training is already rigorous, the main thing I need to do is get my mind right for states,” he says. 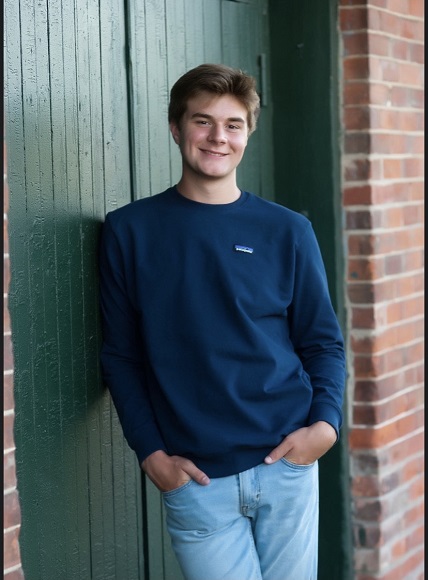 Varitek, who has been with Dexter Community Aquatic Club on and off for about five years, also is a team captain this season and it’s a role all Dexter captains take seriously.

“Looking back at all the amazing swimmers and people that have led this team in the past, it truly puts things in perspective for me,” he says. “I realize what an honor it is to join these talented individuals as a captain of this historically legendary team.

“With all that is going on with our season this year, I have done my best to be more of a fun leader. I think my teammates and coaches will agree with me that I’m a bit crazy at practice, but I want to do my part to make swimming as fun an atmosphere as possible.”

Leo, the son of Tom and Tracie Varitek, also plays water polo for Dexter’s outstanding varsity team and with Wolverine Water Polo Club. He also excels in the classroom where he has a 4.02 (weighted) GPA.

He plans on attending a four-year university but hasn’t decided which one just yet. But he has made one difficult decision. “I do not plan on swimming in college, but I am open to that possibility,” he says. “The main thing I am looking for in a school is something different from my experience in Dexter. I have enjoyed my time in Dexter, but am just looking for a new, fresh atmosphere.”

But first – hopefully – he gets to compete in the State Finals – and bring home some points for Dexter. 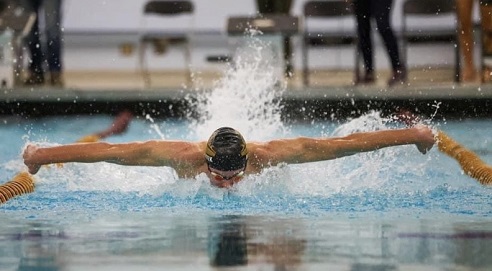 Written By
Terry Jacoby
More from Terry Jacoby
The Border to Border trail continues to move along – step by...
Read More