After joining the rest of last year’s high school winter sports members on the sideline because of the pandemic, Cole Warren is looking to make a big splash this season. The Dexter junior has already put down some lofty goals for himself and plans on springing his way not only to the state meet but into the school record books.

Warren placed sixth in diving with 384.80 points at the Division 2 MHSAA State Championships in 2019 as a freshman and was looking forward to improving on that impressive mark last year when everything was shut down.

The Dexter swimming and diving team begins the season on Thursday and Warren is ready to rock and roll – a music reference we will get to later.

“I’ve been practicing at Legacy since December and high school practice started up last week,” said Warren. “Practices are going very well and I can already see a huge improvement in my skills from last year. I’m excited for the rest of the season and to see how I do in future competitions.”

He begins the season with those lofty goals waiting for him down the road. 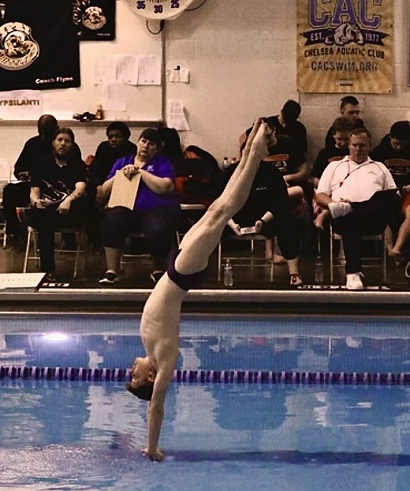 “I would like to break 300 in a six-dive meet and break 480 in an 11-dive meet,” he said. “My goals are to place top three at states and to be named All-American for the second year in a row.”

The Dreadnaughts open the 2021 swimming season on Thursday at SEC foe Jackson.

And with passion, comes results – and high expectations.

“The high school state championship meet last year was cancelled the day before and it really bummed everyone out,” Warren said. “The upcoming season was also pushed back a few weeks, because of the recent executive order. I really hope that we still have a season so I can have a chance to improve from last year.”

So far, the swimming season is on the starting blocks.

Cole, the son of Shannon Bednarski and Kevin Warren, also excels in the classroom and has a 4.07 weighted GPA on the books at the moment. He’s also very in tune with the music scene at Dexter High School.

“Yeah, I first got interested in band in fifth grade when we tried out instruments for the first time,” he says. “When I played the trumpet, I knew that it would be the one I would choose. Compared to all the other instruments I tried, the trumpet came the easiest to me. I really enjoyed playing and it seemed like it would become a very fun hobby for me.” 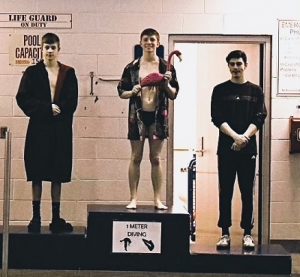 It’s become more than a hobby. It’s another one of those passion items on Warren’s daily planner.

“As of right now, I take private lessons,” he said. “I started taking private lessons last year when I moved up into the symphonic band, which I really enjoy being in. We play very fun, yet challenging music, which I enjoy.”

Oh, like diving, he’s also very good at trumpet but doesn’t like to blow his own horn (insert smiley face).

“To me, being First Chair is a huge accomplishment,” he said. “It means all of my hard work paid off, awarding me with the highest position in the trumpet section.

“I started marching band my freshman year, and I was very lost and struggled a lot at first. I eventually got the hang of it. As I improved my marching and playing, my experience in marching band became much more enjoyable.”

Warren says he listens to most kinds of music, depending on the mood he’s in at the time. He admits he has a playlist of songs for every mood. “When I’m happy or when I’m focusing I listen to very upbeat music (usually pop or rock),” he says. “When I’m sad or upset, I listen to slower songs that are pretty sad.”

Not only were the swimming and diving state finals called off last year, but the Dexter band’s trip to Disney World also was cancelled. “That too was very disappointing,” he says. “The rest of our concerts that we were supposed to have were also cancelled.

Warren right now is focusing on the upcoming diving season and knocking off those goals. He also has a big goal for after high school.