High school is a different experience for everyone but the general rule of thumb is you get out of it what you put into it. Dexter’s Abbie (Abigail) Van Noord has put everything and then some into it and she couldn’t be happier with what she’s gotten out of it.

She’s marched in the band, tinkered in robotics, played athletics and even participated in the SNAP Club while maintaining perfection in the classroom (4.13 is actually behind perfection). So having to stay home and log onto your high school experience has been a big adjustment to make for the Dexter senior.

She says this year has been about “adapting to different ways of doing things.”

“With band, for example, we normally hold a leadership meeting at the end of the school year to prepare for the season,” she said. “Instead, we did the meeting over zoom. When our band camp got cancelled, we planned with our director and the other student leaders to have squad leaders work with their four person squads independently over the summer to safely learn marching fundamentals. Even as we were able to meet as a band in late September, only half the band could meet at a time. We all learned how to use special equipment like bell covers and flute shields to rehearse safely.

“To maintain ensemble skills, we practiced playing along with recordings, since the delay over zoom doesn’t allow us to play together,” she said. “I’ve even done some experimentation with audio editing software to play ensemble music with myself.”

In the virtual classroom, Van Noord and her classmates ran into other challenges.

“School has been similar, with lots of adaptations,” she says. “Even with the social aspect of school, my friends and I use technology to keep in touch and chat during lunch or work on homework together.” 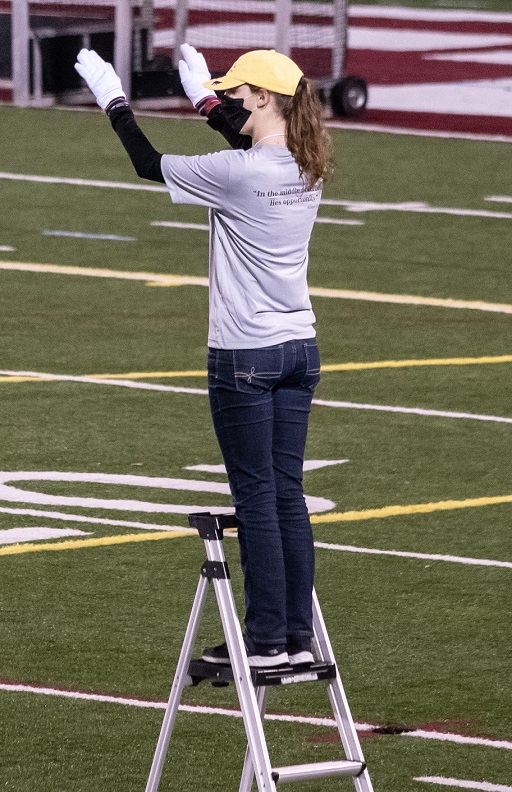 Abbie, the daughter of Jon and Annabel Van Noord, is a drum major this year for the DHS marching band. She also plays the flute, piccolo and bass flute for fun. She also is a member of the Dexter track and field team where she does pole vault, long jump and runs the high jump and hurdles. And she has been a Dexter Dreadbot for all four years.

Music has been in tune with Van Noord for years and she can thank her parents for that part of her education. “I don’t remember exactly when I became interested in music, my parents enjoy listening to classical music so I was exposed to it from a young age,” she says. “I got to see older cousins and extended family play their instruments, which probably interested me before I started learning.”

She doesn’t remember when or why she first picked up the flute.

“A few years ago, I found some of my school work from second grade where I said I wanted to play flute, so I must have decided some time before then,” says Van Noord, who has taken lessons with Pam Morgan since fifth grade. “I’ve been taking lessons through zoom (it works surprisingly well). (Morgan) is an amazing teacher. I’ve learned a lot from her, technically and musically.”

“The ensemble is primarily composed of juniors and seniors, so we are able to play more technically challenging music,” she says of Symphonic Band. “I also get to play both flute and piccolo, depending on the piece. As first chair, I have several responsibilities, such as taking attendance for my section and collecting music at the end of a concert cycle as well as playing any solos. Symphonic Band is a lot of fun, playing challenging music with other talented musicians.”

As for her taste in music she says she primarily listens to 80s rock and classical music among other genres. “My favorite band is U2,” she says. “I probably listen to them the most.” 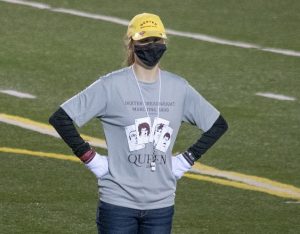 While she “still hasn’t found what she’s looking for,” Van Noord has found great fun and challenges being one of this year’s drum majors in marching band.

“As a drum major, my role can be summed up as the in-between between other student leaders (squad leaders and captains) as well as the band, and our director, Dr. Moore,” she said. “I work along with fellow drum majors Lucas Adams and Grace Gusoff to run rehearsals, listen to feedback from the BLT (Band Leadership Team), help correct mistakes in marching, set up and clean up before and after rehearsals, conduct the band, and more.”

A drum major isn’t just “waving our hands around.”

“It can be a little nerve-wracking at times, not wanting to disappoint, but the feeling never lasts long due to the supportiveness of the band,” she says. “It’s been an honor and pleasure to be one of the band’s 2020 drum majors.”

The robotics season has been modified for this year due to COVID even before the governor shut everything back down last month.

“In-person competitions will not be happening, but there are other challenges for us, such as a game design challenge, where we can design a game to be played by robots, and an at-home robotics challenge utilizing last year’s game, which many teams, such as the Dreadbots, were unable to compete in before the cancellation of the season.” Van Noord said. “I am still involved, and am in my second year as a co-captain of the team, working with Cole Scheller (my fellow co-captain). We have been preparing to meet online and virtually train new members.”

When she is done getting the most out of high school, Van Noord plans on attending college and studying mechanical engineering. “I intend to continue playing flute as a hobby, and potentially in an ensemble setting,” she said. “I haven’t decided where I am going to college yet.”

Wherever she goes, she will put in exactly what she expects to get out of it – which is a lot.