The alarm rings early for high school swimmers, who often arrive to school well before the sun has even made an appearance. They also have practice after school and sessions in the water can be grueling, challenging and draining.

While there are no charts or graphics or data to support this claim, swimming is one of the more difficult sports for high school athletes. It’s a real and all-in commitment that begins almost every day before the sun comes up.

So while the star quarterback or starting point guard or gold glove shortstop is hitting their snooze button for the third time, Dexter’s Emma Sortor and her teammates have already put in a hundred or so laps at the Wylie pool.

Many young swimmers only swim – it’s a year-round sport with both high school and club swimming, and the competition in this part of the state is intense. Dexter and the nearby Ann Arbor schools don’t win states titles by taking months off to relax and kick back or kick a soccer ball.

Despite the incredible time commitment that swimming requires, Sortor has managed to “sort out” playing two sports.

“She’s a great kid and has also been on the varsity softball team since her freshman year,” said Dexter swim coach Corey Bergen. “It’s hard to be a multi-sport athlete and have one of them be swimming (because of the specialized sport and time commitment), but she’s done it.”

And she’s done it at a high level. A senior, co-captain, Sortor made an individual state cut for the first time this year at the SEC meet after being so close the past few years.

“It’s a real challenge,” Sortor says of playing multiple sports in high school. “In an effort to balance my athletics, academics, and social life, I have had to learn to manage my time well. There have been many times when I’ve gone from one practice to another, or where I’ve gotten dressed in my softball uniform in the locker room after a swim meet. On more than one occasion, I’ve gotten ready for a school dance in the car.”

Emma, the daughter of Jennifer and Patrick Sortor, has Dexter athletics in her DNA. Her family has a long history of representing the Dreadnaughts in sports.

“I am a fifth generation student-athlete,” she says with great pride. “My grandpa, Rob Sortor (class of 1962), was captain of the football team. My dad, Patrick Sortor (class of 1991), played three varsity sports (football, basketball and baseball).”

“I began swimming at the age of 5 at Ann Arbor Country Club, the local outdoor pool,” she says. “However, at age 8, I decided I wanted to swim year-round, so I joined the Dexter Community Aquatic Club, where I have been swimming ever since. I liked the camaraderie of the team and swimming relays with my friends –many of whom I still swim with today.”

While she has had plenty of accomplishments in the water, Sortor saved her biggest for her final swim meet with the full Dexter team. In other words, she save her best for last and peaked at not only the right time, but the last time. And she used heartbreak as motivation.

Although Sortor has been All-SEC several times in the 100-yard butterfly, she kept coming up short of achieving a state cut. We’ll let her pick up the story. 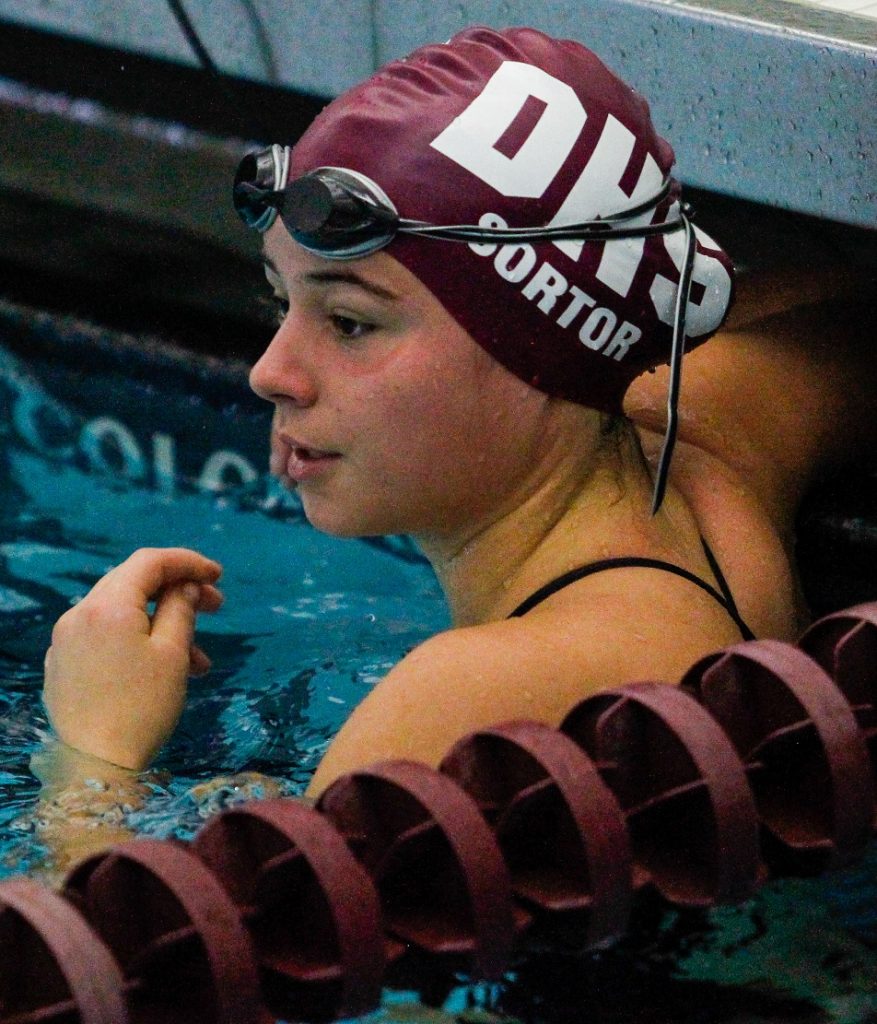 “During my junior year, I came really close – within .36 seconds,” she says. “However, at SEC’s that season, I missed the time again. My family, friends and teammates were there to support me, and I was devastated not to get the cut.

“I devoted this final season to achieving this goal. I knew it would be harder this year, because I, like everyone, had gone six months without swimming due to COVID. Furthermore, the stresses of senior year, such as applying to college, school work, sports all began to add up. I started struggling in the pool.

“Eventually, I decided it was in my best interest to make some changes, such as taking some time off softball and changing my events so I could swim my best 100 fly at SEC’s. The conference meet was very unusual, as there were no spectators allowed. This meet was my final chance ever to get the state cut in the 100 fly. Before the race, I was the most relaxed I’ve ever felt before a swim. I swam with a sense of focus like never before. The highlight of my swimming career was looking up at the scoreboard to see I got the cut by 0.05 seconds and hearing my teammates and coaches cheering. It was a super special moment and was the perfect way to conclude my time with the whole team.”

Sortor talks with the same amount of pride when talking about her “awesome” Dexter teammates. She says that despite the limitations of the pandemic, they were able to maintain the spirit and energy of Dexter Women’s Swim & Dive.

“In the sport of swimming, it is very difficult to take time off and then return to normal,” she says. “Most everyone swims year-round, so we, along with other teams, struggled at the beginning of the season. Nevertheless, the team persisted each day at practice, breaking barriers caused by our time away from the pool.”

The hard work paid off at the SEC tournament. Dexter not only cruised to a first-place finish but many of the Dreadnaughts recorded personal-best times.

“The girls adapted well to the changes, willing to alter many of our deeply rooted traditions that were impossible this season,” said Sortor, who also was one of the team’s captains. “Being a swim team captain is an honor. Dexter swimming is a very successful program composed of intelligent, hard-working athletes. I’ve been fortunate to have captains before me who exemplified incredible leadership and served as ideal role models to the team. I hoped to inspire the team similarly by leading by example and caring for my fellow swimmers during stressful times.”

The recent shutdown from the MHSAA has forced the swimming and diving teams out of the water. The plan right now is to have the State Finals on Dec. 22-23.

When the calendar flips to 2021, Sortor will flip her attention to softball, a sport she started playing in the third grade. She has spent her first three seasons on the varsity team and is very much looking forward to playing her senior year after last season’s schedule was cancelled because of the pandemic.

“This spring, DHS should have a strong team of girls who have been committed to softball for many years,” says Sortor, who plays all three outfield positions. “We have a strong senior class. Seven of us played on the varsity team as freshmen.”

Emma, the daughter of Jennifer and Patrick Sortor, has an impressive 4.078 GPA – she obviously takes her studying as seriously as her swimming and softball playing.

Meanwhile, Sortor continues to sort out her future.

“I plan to attend college to study biology and pursue a career in health care,” she says. “While I do not plan on committing to swim or play softball in college, I am certainly interested in club sports to keep enjoying the sports I love.”

Written By
Terry Jacoby
More from Terry Jacoby
Zoë Michos is a competitor. She’s a hard worker and has raced...
Read More