Ben Ladd keeps the beat in life by always learning, trying new things and taking on any challenge that’s in front of him or around the next corner. So don’t expect him to just sit behind a drum set – he’s all about the music and all the joy that it brings him and others.

If you haven’t heard yet, Ladd is senior percussionist for the Dexter Marching Band. He is a three-year drumline captain and plans on majoring in music in college.

“I like the percussion because there is always something new to learn, and another instrument to try,” he says. “Anything from a standard snare drum, to timpani, vibraphone or marimba, there’s always challenging new techniques to master.”

Ladd says the challenge is part of the reason why he loves percussion. But he doesn’t face these challenges alone.

“I have taken lessons with three different instructors,” he says of his quest to keep learning and improving and expanding. “I started taking lessons with Chuck Ricotta, the percussion instructor for The University of Michigan’s Drumline. I then transferred to Tom Twiss, a drum set teacher with a lot of experience teaching.” 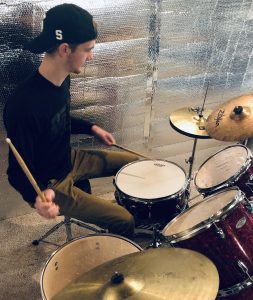 Ladd’s current instructor, Dr. Jonathan Smith, has played a major role in his musical career. “He is not only an incredible instructor, but also has pushed me far out of my comfort zone with musical technique, resulting in some truly amazing pieces,” he says. “Dr. Smith has also taught me many lessons about leadership, the strategies to employ, and much more.”

Ben, the son of Mike and Chris Ladd, has always been interested in music and first started playing percussion in the fifth-grade band in Dexter. In the eighth grade, he earned a slot on the Michigan All State Band, a fantastic group of individuals who he got the chance to play with that season.

Since Ladd likes to experiment, learn and try new things, his influences and musicians he admires is all over the drum kit. He says he likes all types of music, from modern hip hop, to classical, classic rock and metal.

“I admire a few drummers for various reasons,” he says. “I admire Buddy Rich, as he is one of the most influential drummers of all time. I also admire Travis Barker for branching out and playing the drums in a scene where traditional drumming is dead, modern hip-hop, continuing to prove that human skill is just as good as computer generated software.”

He also admires Joey Jordison and Jay Weinberg, strictly for their technique. “Joey Jordison can play extremely fast very consistently and over a long duration of time, a truly impressive skill on the drum set,” he says. “I admire Jay Weinberg for his incredible syncopation and time keeping ability, as he never shifts tempo and can create fascinating beats and fills around untraditionally placed notes all while staying perfectly in time.”

Speaking of “perfect” and “time,” Ladd says he’s had the perfect experience during his time with the Dexter High School Marching Band. 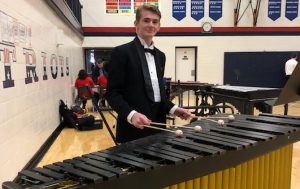 “My previous three years of marching band have been the best years of my life,” he says. “I have been so lucky to meet some of the greatest influences in my life through not only marching band, but music as a whole. Band camp is my favorite week of the year, which sounds funny as we are out in the hot sun for eight hours of rehearsal. As important as preparing the show is at band camp, I believe the many shenanigans going on at band camp in the percussion section are just as important.”

Ladd says the drumline is an “extremely tight-knit group of people.”

“We are like a family, although the other sections prefer to refer to us as a cult,” he says. “The respectful yet comedic nature of our section allows people to get comfortable in our section very quickly, welcoming everyone with open arms, which is extremely important for freshmen in band. We offer an instant community as soon as incoming freshmen get to band camp, which I believe is essential, as finding a group in high school can be very challenging.”

Of course, this year has put everything a little on the down beat because of the pandemic but the Dreadnaughts are adjusting and conquering. Dexter held weekly drumline rehearsals during the summer to get the techniques up to a very high level before even getting on the field.

“The year has been a very large shift, as not only did we not get band camp, but we didn’t get nearly as much time to integrate the freshman into our community,” Ladd says. “Because of this, I spent as much time with the freshman as I could, pulling them aside and working individually to correct technique, and checking in on all of them every time I saw them.” 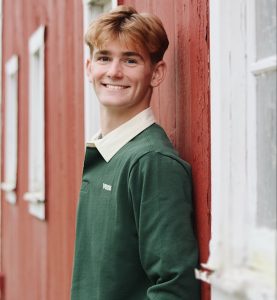 Ladd gives a lot of credit to a successful 2020 and the overall excellence of the Dexter HS Marching Band to Dr. Moore and Mr. Damman. He didn’t hold back on his appreciation for the role the two music leaders play in the success of not only the band, but his own musical accomplishments.

“Mr. Damman has always been one of my biggest supporters, pushing me from day one to be better and better, and to pursue my passion for music,” he says. “He got me interested in percussion, and his encouragement and faith resulted in some outstanding achievements such as making the All State Band and receiving the Michigan School Band and Orchestra Association Scholar Instrumentalist award.

“Dr. Moore has also played a substantial role in shaping me not only as a musician, but as a person. He has a strong moral compass, and truly cares about his students. Dr. Moore gave me the position of drumline captain while I was only a sophomore, something he had only done once before. He believed that despite my age, I could do the job well. Giving me the opportunity resulted in me getting to lead side by side with some amazing individuals over the past three years.”

Ladd also praised and thanked all the current and former Dexter HS Marching Band members including his fellow captains over the years such as Andrew Merriman, Yaw Oduro, Jake Fazioli, Linsey Momrik and Archer Horner.

As you would expect from someone who loves to learn, Ladd is an excellent student. He has a 3.92 GPA as he prepares for the final couple of verses of his high school experience. “It is important to be a student, always looking to improve yourself,” he says.

“I hope to go to either MSU or Grand Valley,” says Ladd. “I plan on possibly trying out for the marching band at either school, as being on the field is a passion that will be hard to let go.”

Written By
Terry Jacoby
More from Terry Jacoby
There was a change in format – going to a more traditional...
Read More