Don’t expect Sam Melvin to blow his own horn – unless he’s with the marching band – but this Dexter senior does a lot more than just carry a tune. He will help carry his cross country teammates across the finish line on Friday during the Division 1 State Finals.

Melvin, a gifted musician, hopes his team can do well on Friday against the “greatest hits” of cross country runners in the state. And finishing among the top 10 as a team would be, well, music to his ears.

“Coming off of last year placing second in the state meet, we knew that we weren’t going to be as good after losing five of our top seven guys, but we do want to make it to the state meet again and show that our team is going to consistently be one of the top teams in the state,” Melvin said.

The Dreadnaughts accomplished just that by taking second at last weekend’s D-1 Regional at Willow Metropark in New Boston. Led by a group of talented seniors including Melvin, reaching that goal was a total team effort and one that required a lot of hard work and dedication. 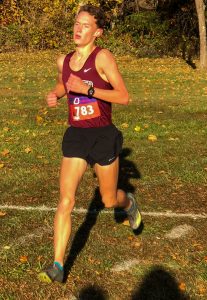 “As a team we try to have as much fun as possible as long as it doesn’t affect our training,” Melvin says. “People know when it is time to work at practice in order to get better, but after the work is done, we often play games together and, although this has been impacted by the pandemic, most of us are friends and frequently meet up with each other outside of practice.”

And Dexter cross country isn’t just a dozen kids showing up with sneakers on and running through the woods on the weekend. The program has upwards of 50 runners on the roster and training is extensive, and for the most part, a year-round commitment.

“We start the off-season with 3-5 mile runs Monday- Friday with a 6-7 mile long run on Saturday,” Melvin says. “By the time the season arrives we are doing 6-8 miles on weekdays with two hard workouts on two of those days and our long runs go up to 13.1 miles (a half marathon). This amounts to 50 plus miles per week at the height of our training.”

And the training has paid off. Dexter placed second in the state at last year’s D-1 race at MIS and have landed back at the starting line for the 2020 state finals which will be held Friday morning again at MIS.

This will be Melvin’s second state finals. 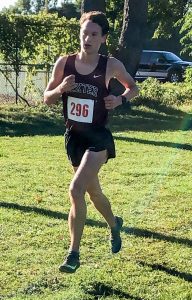 As a sophomore, Melvin was the sixth fastest runner on the varsity squad and helped the Dreadnaughts finish third overall. He placed 109th in the state individually. He also was All-SEC after finishing 13th the conference meet and placed 37th overall at the regional meet.

Last year as a junior, Melvin suffered a stress fracture at the beginning of September and couldn’t run again until March.

Melvin’s road to cross country came in fifth grade after taking a few turns with other sports. He sums up his love for running in perfect stride: “Everyone was there to get better at running, not get better than someone else at running,” he says. “There wasn’t a hyper competitive nature to any of it, and I liked it because it was a much more relaxed atmosphere. It also felt good to find the thing I was good at.”

Over the years, he’s only gotten better. He says before a race, he not only sets a goal time and place to finish in for the race, but also picks out a couple of people to stick with during the race.

It’s all part of his routine and mental approach to a race.

“On the day of the race I make sure to eat the right things in the morning (usually peanut butter toast and banana or some hash browns) so I have the right fuel for my race that I can easily digest,” he says. “As the gun goes off I initially try to get out fast so I don’t get stuck behind people early in the race. During the race I try to stay with someone that I know is a little faster than me to push myself a little harder than last time, and because it is easier to race in a group than by myself.

“I have to make sure I’m continuously focusing on the race and how I am doing because I tend to shut down mentally when it starts getting hard, and that usually causes me to slow down. I tend to run my races with the first mile being my fastest and then trying to maintain my place for the rest of the race.”

Melvin also crosses the finish line among the best in his class. He has a 3.99 GPA and has a passion for music. He is the trumpet squad leader for the outstanding Dexter HS Marching Band.

“I first got interested in playing the trumpet when I decided to do band for my music class in fifth grade,” he says. “When I went to decide which instrument to play, the trumpet looked like the most fun to me, and it was the instrument I could make any sort of sound out of when I first picked it up. I have since loved playing the trumpet and band has been one of my favorite classes every year.”

He says going to band camp has been one of the highlights of his summers while in high school.

“Marching band has been a lot of fun for me,” he says. “We play tons of interesting music during marching band season with my personal favorites being Livin’ on a Prayer by Bon Jovi, Thriller by Michael Jackson, and Bohemian Rhapsody by Queen. Playing at the football games is fun (unless it is raining) and provides tons of energy that makes it exciting through the whole game.”

With his high school career heading to the finish line, Melvin says he’s looking forward to the next course in his life. “I would like to go to the University of Michigan with a major in engineering (more specifically environmental or civil engineering),” he says. “I would love to be able to run on U-M’s cross country team, but if I can’t make it onto their team I will definitely join M-run, the club team at U-M.”

But first things first, and Friday is first on the list.

Written By
Terry Jacoby
More from Terry Jacoby
Wesley Schroeder has wrapped his arms around theater and has no plans...
Read More