She walked off the field on Saturday and it was tough to tell whether it was sweat or tears rolling down the smiling face of Dexter’s Kylee Niswonger. There is probably no greater feeling than winning your last game as a senior – because very few get to do that.

“I am on top of the world,” said Niswonger, just moments after holding that championship trophy under a bright sun at Al Rhitt Stadium. “It feels so great. Our team has worked so hard for this and I don’t think we took a moment off. I’m just so glad to be here and to win this again.” 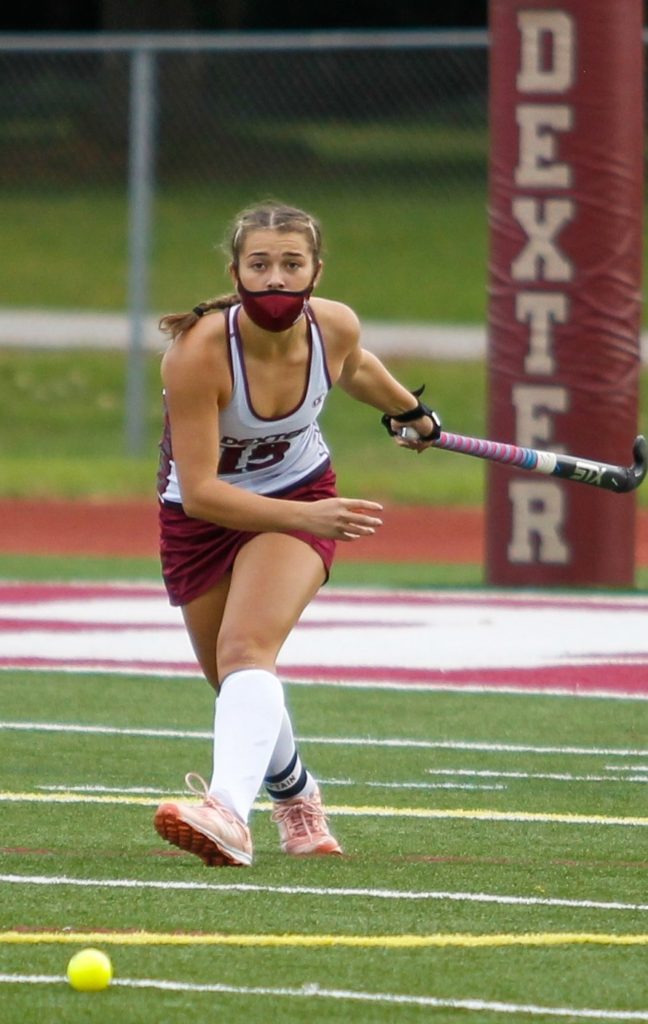 Niswonger, along with fellow senior Abby Tamer, was one of Dexter’s best players and team leaders for Team 11. She simply stands out with a stick in her hand and she knew they would have their hands full against Pioneer. Even after they took a lead in the first half.

“We knew being up 2-0 at halftime that they would come out and play hard because that’s what Pioneer does,” she said. “If they get down, they play even harder so we knew we had to take our game up as well. I thought we did. We came out fast and strong.”

Niswonger speaks from experience. She’s been playing this game for a long time and at a very elite level.

Only 17 years old, Niswonger is a MaxField Hockey Top 50 player in the nation for the 2021 class. She also was selected to the Top 40 player list for the West Region and last year made the Max Field Hockey All-American Watch List.

Niswonger, who can play anywhere on the field but primarily plays midfield and forward, also is a standout player for Pinnacle Field Hockey. Under the direction of Director Nancy Cox, Pinnacle has helped grow the sport of field hockey for the past 30 years and plays in tournaments all over the country. 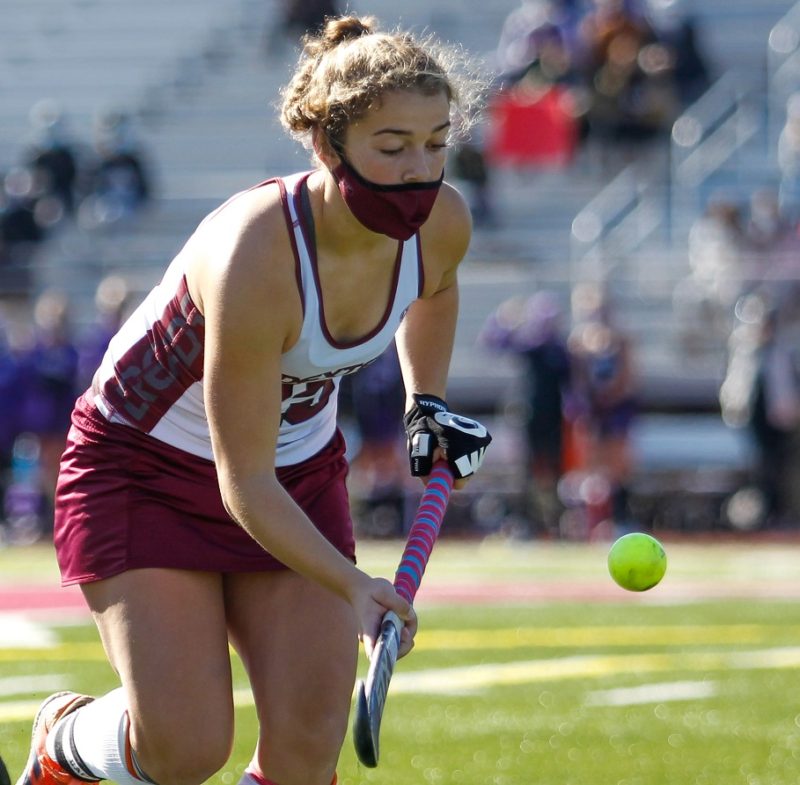 Niswonger and Tamer are among the top high school field hockey players in the country and were both named to the MHSFHA All-State Dream Team last year and will no doubt make it again this year.

So when Kylee and Abby talk, teammates listen, follow and learn.

“For me, I’ve been so fortunate to grow with both Abby and Kylee in the sport and as friends,” says junior Gracie Burns, an outstanding player herself. “I’ve learned that you get out what you put in, resiliency and confidence are key attributes to both your game and lifestyle because of them. They have both shaped me as an athlete and as a person.”

While having Niswonger and Tamer back this season was a huge plus, Dexter had to earn its way back to the finals.

The Dreadnaughts lost some key players off last year’s team, especially on defense. Several players stepped into those big shoes and delivered but it was more than that. Winning a state title takes a total team effort and commitment and the Dreadnaughts delivered the goods.

“Our practices were always hard and we all knew we had to come and give 100 percent in practice and that carries over to the games,” Niswonger says. 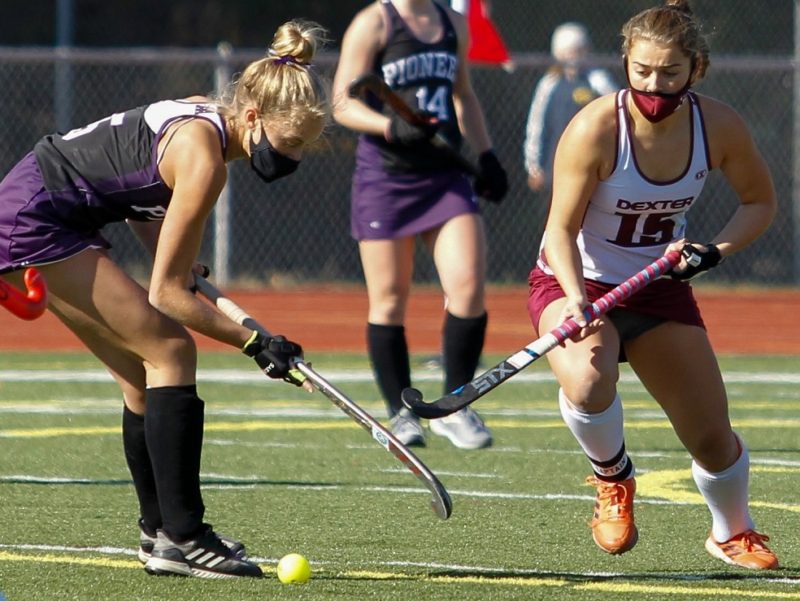 As a sophomore, Niswonger and the Dreadnaughts lost in the semifinals to Saline. They responded by winning it all the next two seasons, the first two D-1 championships in school history.

Niswonger knows a lot about feeling at home, and Dexter has always been her home. In fact, her parents, David and Karry Niswonger, grew up in Dexter and both graduated from Dexter High School.

So her answer about why she picked the University of Maryland to spend the next four years at wasn’t just to the point, but from the heart.

Niswonger made that eight hour trip east, and by the time she had left, it was really a no-brainer.

“I just love the coaches and the atmosphere of the team and I’m very excited to go and get started,” she said. “And the campus is beautiful.”

The Terrapins, currently coached by Missy Meharg, are among the most accomplished field hockey programs in the country with eight NCAA national championships and 13 conference championships, including five in the Big Ten.

But she isn’t done being a Dreadnaught just yet – there are a couple more voyages to set sail on and maybe even a few more championships along the way.

Niswonger is not a one-sport Dreadnaught. She also plays basketball and softball – and as one would expect, is very good at both.

“I’m very excited about basketball,” she says. “Our goals are the same as in field hockey. Work hard every day in practice, get better every day and hopefully come out on top.”

Niswonger says her approach to each sport is the same. Whether she is stick handling, dribbling or at the plate, it’s all about working hard and being prepared.

And it’s also about …

“Being a good teammate and working with your teammates because they always have your back and you always have theirs,” she says. “And staying positive and confident is the best advice I can give.” 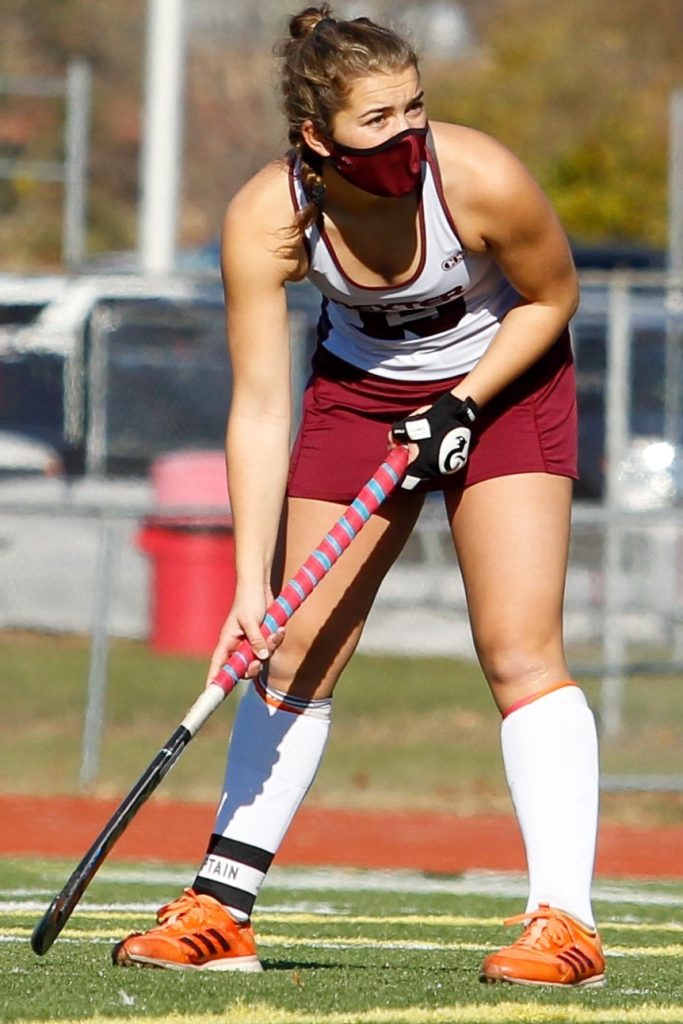