For the past two years, Dexter football had been on the verge of accomplishing what it previously hadn’t – win an MHSAA playoff game. Both years saw Dexter fall short in heartbreaking fashion, 2018 in overtime at South Lyon and last year coming up short on a game-tying two-point conversion attempt against Livonia Churchill.

Dexter, behind 311 all-purpose yards and five touchdowns from senior quarterback Colin Parachek, finally made history with a 56-28 victory over visiting Ypsilanti Lincoln in Friday’s pre-district match.

For Parachek, who started at quarterback for the Dreadnaughts in the 2018 and 2019 losses, the playoff triumph was a long time in the making.

“This is something we’ve been working for since we started playing football in third grade,” Parachek said. “In possibly the seniors’ last game on this field, everything went right for us. I’m speechless right now.”

“We’re very fortunate to have the quarterback we have pulling the trigger for us, because we wouldn’t be able to do the things we do without him,” Jacobs said. “He’s a special player. I’ve coached a lot of good ones in my life, but this kid is right there at the top of the list.” 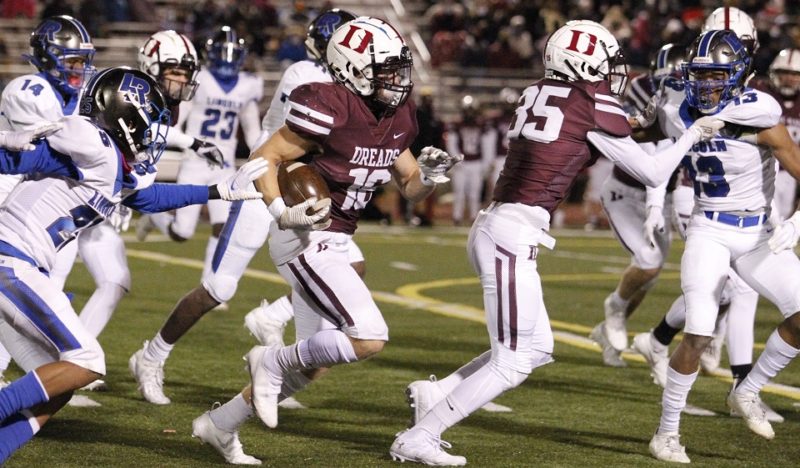 The Dreadnaughts advance to next week’s District semifinal, where they will square off with none other than Livonia Churchill in a rematch of last year’s District semifinal. Churchill, the No. 1 seed, earned a bye this week and will play host to Dexter at 7 p.m. on Friday.

“We all know what happened last year,” Parachek said. “It was a gut-punching loss, so hopefully we can get our revenge this year.”

Parachek wasted no time in showing why he is arguably one of the state’s top quarterbacks Friday. After moving the sticks with a 34-yard quarterback keeper, he completed a short pass to his brother, sophomore Brennan Parachek for a fourth down conversion into Lincoln’s red zone. Three plays later, he capped an 11-play, 66 yard scoring drive with a 1-yard rushing touchdown to give Dexter a 7-0 lead on its opening drive of the game.

Dexter recovered a Railsplitter fumble on the next kickoff, and increased its lead with a touchdown only 35 seconds after its first. The Parachek brothers hooked up again for a 17-yard completion, and then running back Cole Cabana capped off the drive with a 1-yard rushing touchdown to give Dexter a 14-0 lead with 6:48 remaining in the first quarter. 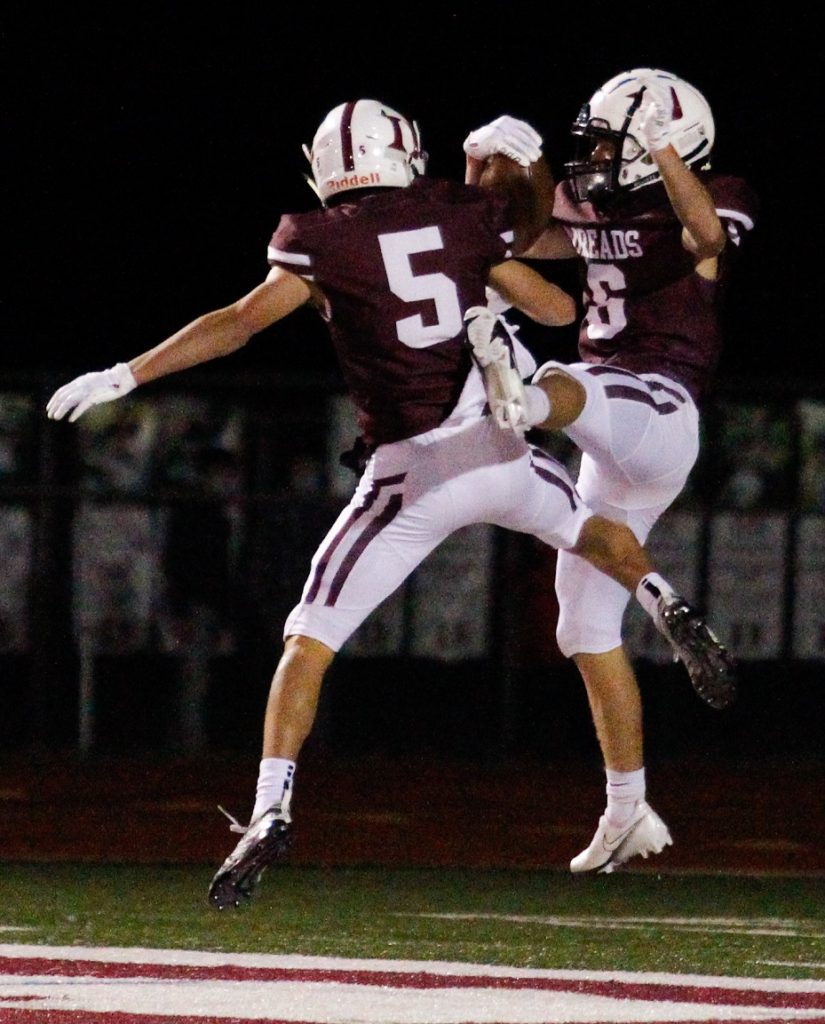 Lincoln struck back with an 8-play, 65-yard scoring drive. A 30-yard run from running back Jorden Collier set the Railsplitters up at Dexter’s 15-yard line, and Collier capped the drive with a 1-yard rush late in the first quarter to cut Dexter’s lead to 14-7.

Dexter took over in Lincoln territory halfway through the second quarter after a sack from senior Caleb Drenner forced the Railsplitters to punt from deep in their own territory. On the seventh play of the drive, already having converted a fourth down, Parachek found Cabana wide-open over the middle for a 35-yard touchdown on third-and-15 to give the Dreadnaughts a 21-7 lead with 7:34 remaining in the first half.

Dexter and Lincoln combined for three touchdowns in the final 78 seconds of the first half. After Collier scored his second touchdown of the game to pull the Railsplitters to within 21-14, Dexter jumped in front two scores again when Parachek found receiver Braeden Fuson wide open for a 64-yard touchdown with 51 seconds left in the half.

It looked like Dexter would have a two-score lead at halftime, but Lincoln scored on a deep pass to the end zone on the half’s final play as Lincoln’s Jaylen Thompson came down with a 26-yard touchdown pass from quarterback Trey Richey. Dexter led 28-21 at halftime.

Just when it seemed Lincoln had momentum, Dexter flipped it when senior linebacker Ethan Esch stopped Collier on fourth-and-1, handing the ball to the Dreadnaughts’ offense deep in Railsplitter territory. Three plays later, Parachek perfectly executed the run-pass option, faking a handoff and taking the ball 19 yards up the middle for a touchdown, giving Dexter a 35-21 lead with 8:44 remaining in the third quarter.

An outstanding pass break up by Avery Berkebile gave Dexter the ball back, and five plays later, Parachek barreled into the end zone from 2 yards, effectively sealing the game for the Dreadnaughts. Parachek had 46 rushing yards and 21 passing yards on the 5-play, 76-yard drive which gave Dexter a 42-21 lead with 5:51 remaining in the third quarter.

After giving up 21 points in the first half, Dexter’s defense was much better in the second half, allowing only seven points on a late touchdown by Thompson. 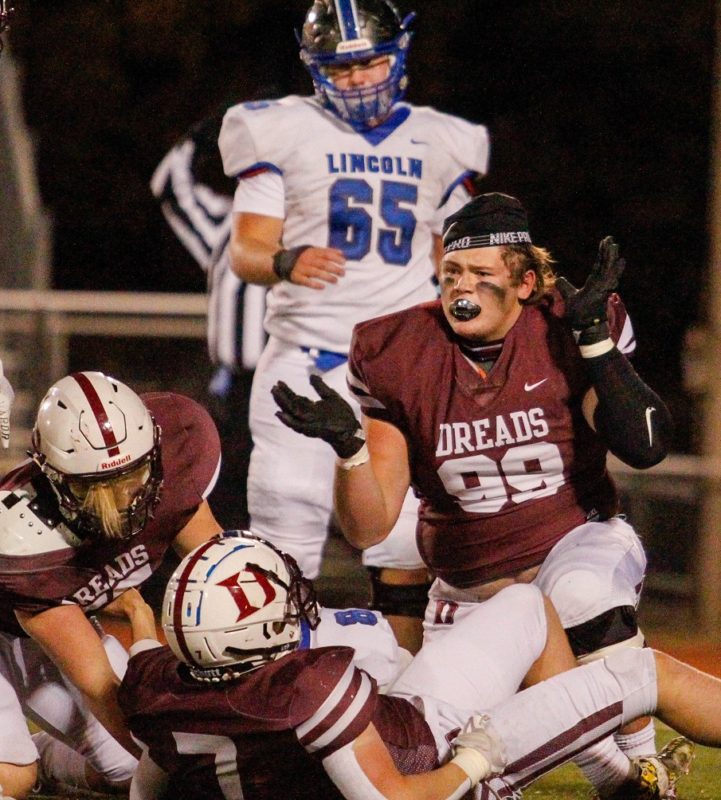 Defense was a topic of discussion in the Dexter locker room at halftime.

“We got on the board with the kids at halftime, and just reminded them of their assignments,” Jacobs said. “We didn’t make any major adjustments; we just tweaked a couple things with some technique with some of these kids and it ended up working out for us.”

Dexter scored its seventh touchdown of the night after a 42-yard run from Cabana, who finished with 186 all-purpose yards, put the ball at Lincoln’s 4-yard line. Senior Evan Krolewski ran the ball in on the next play to give the Dreadnaughts a 49-21 lead in the first minute of the fourth quarter.

Dexter added a late touchdown from Cabana, his third of the game, to force a running clock late in the fourth quarter.