The Dexter boys’ varsity cross country team will line up at Saturday’s Regional at Willow Metropark with one goal – qualify for the state finals. And leading the way will be a group of seniors ready to take their running careers all the way to the finish line.

“The goal for the varsity team right now is to qualify for states at the Regional meet on Saturday,” says Nathan Gariepy, one of those talented seniors.

It won’t be easy, but nothing in 2020 is easy, which brings us to Gariepy’s other goal, one that should be very easy.

“My goal for the team as a whole is to get more guys to come and hang out outside of practice,” he says. “The last couple years we would hang out all the time, go see a movie, get some lunch, or just hang out at someone’s house overnight. This year though, possibly due to COVID, we hardly get together outside of practice.”

Gariepy makes the final turn with his Dexter High School cross country teammates following an improved junior year in 2019 – which really was a turning point in his career.

“My junior year was the first year I started to make accomplishments in running,” he says. “Previous to that I didn’t place notably in any race, and I never ran varsity.” 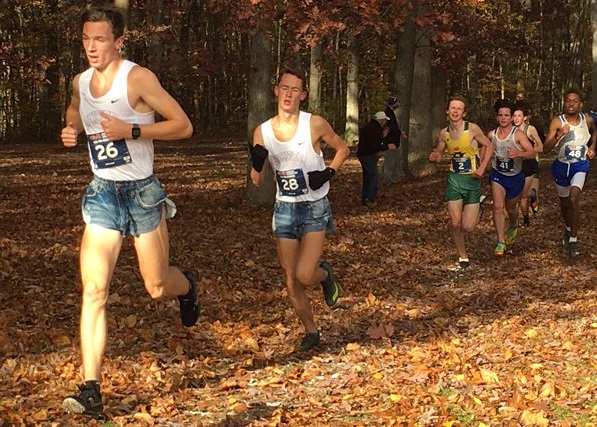 With the junior varsity team, Gariepy placed second at the Holly invitational, 16th at the Portage Invitational and first at DeWitt. With the varsity team last year, he placed 26th in the SEC championship, 46th at Regionals, and 188th at States.

He’s had another solid year this season as a key member on the varsity team. He placed sixth at both the SEC Championships (PR 16:21.3) and the MHSAA Pre-Regional. He was fourth at the Jackson CC Meet and fifth at the Highlander Invitational. He has finished top seven in every race this season.

Gariepy started running cross country in seventh grade for no particular reason. “I don’t fully remember why,” he says. “I had a good time with my friends though and I think that’s the main reason I stuck with it. I really don’t enjoy running all that much, but I like spending time with the team enough to do it.”

He certainly does it a lot – especially lately.

The Dreadnaughts start training for cross country the week after school gets out for summer. They run six days per week until the state meet. Off-season training starts easy with about four miles per day and an occasional workout.

“Later in the summer, but before the season starts, we have worked up to eight mile weekdays and 12-13 mile long runs on Saturdays usually with two workouts each week,” Gariepy said. “Once we begin racing, we usually only have one workout each week, but keep the mileage the same throughout the rest of the season.”

This year was a little different however for Gariepy because of a stress fracture in his lower leg that happened in March. “I didn’t get back to running until a few weeks after everyone else, and I wasn’t up to full mileage until we were into the season,” he says.

Let’s head over to the starting line and see how Gariepy approaches a race. He says prior to a race he doesn’t think too much about it.

“I think being too serious about a race can be detrimental,” he says. “For me, the biggest mental aspect of running a race is keeping my mind off of the physical torment I’m putting my body through. Once the gun goes off, I focus on anything and everything that crosses my mind in order to keep from thinking ‘this sucks’ or ‘this really hurts.’”

Typically, he says, one thing he tries to focus on is his breathing. “Or I think about one or two lines I remember of the most recent song I’ve listened to, and math, lots of math.”

So how does it all add up?

“Once we pass through the first kilometer mark and receive a time, as well as at the one and two mile marks, I think a lot about pacing,” he says. “I relate the paces we’re running to previous races, calculate paces I need to run for the rest of the race in order to PR, and other things like that.”

Nathan, the son of Jackie and Paul Gariepy, also runs well in the classroom (4.1 GPA) and runs track for the Dreadnaughts.

As for future runs after high school, Gariepy hasn’t picked a college yet but is deciding between several schools including U-M and Michigan Tech. “If I go to U-M, I will most likely not be on the school team, but I would join M-run. If I go to Michigan Tech, I would like to run on their team.”