Next stop the playoffs – and the Dreadnaughts appear ready to roll while Pioneer will face a tough task in the opening week.

Dexter put up 49 or more points for the third straight game and fourth time this season as they steamrolled visiting Pioneer 49-14 on Friday night before a decent-size crowd, cheerleaders, a dance team and even the Dexter HS Marching Band. It actually felt like a high school football game.

It felt like a long night for the Pioneers, who hung around early in the game but too many turnovers in the first half and the inability to slow down Dexter’s high-powered offense – few teams will be able to do that at this point – proved costly for a team that has struggled since losing their starting QB in week one.

Dexter improved to 4-2 on the season and should draw a high seed and home game for the first round of the playoffs. Early reports are that the Dreadnaughts will host Lincoln on Friday night. Schedules are expected to be announced Sunday and Monday by the MHSAA. 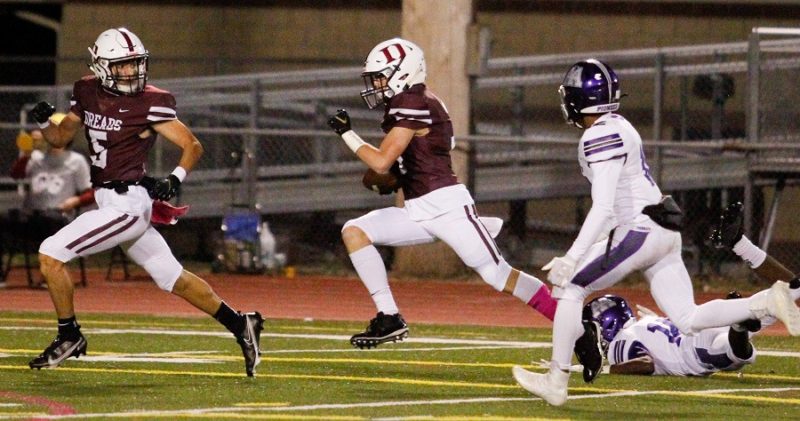 Pioneer falls to 0-5 on the season and could end up facing Saline in its first-round game. The Hornets lost to Grand Blanc 14-13 for their first loss of the season.

Dexter led 21-6 after the first quarter and 42-6 at halftime. The second half was a running clock.

While the Dexter offense continues to make big plays, it was the defense that had the scoring highlight of the night and put two touchdowns on the board.

Pioneer had the ball around the Dexter 20-yard line with over 4 minutes to play in the second quarter and trailing 28-6. A score here and a two-point conversion and the Pioneers could be heading into halftime down just two scores.

But Dexter’s Gerzon Herter had other ideas. The sophomore defensive back intercepted a pass at the 1-yard line, ran up the middle of the field, cut to his right and headed down the sideline covering 99 yards for a Dexter TD. So instead of a two-score game, it was a 35-6 Dexter lead. 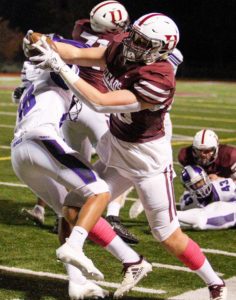 A 9-yard TD run by QB Colin Parachek on a fourth-down call following another interception pushed the Dreadnaughts ahead 42-6 heading into halftime.

Dexter’s Ethan Esch had a pick-six in the second half for Dexter’s final score of the night.

Dexter opened the scoring on the arm of Parachek. The senior QB tossed a short TD pass to Braeden Fuson, who had another huge game for the home team. Blake Sislo hit the extra point (he converted on all seven in the game) to give Dexter a 7-0 lead with 8:38 left in the first quarter.

After Dexter got the ball back, Parachek threw a 75-yard pass to Ty Rychener who was tackled at the 2-yard line. Parachek ran it in from six yards out for the score to make it 14-0 with 6:36 left in the opening quarter.

An interception by Sislo set up Dexter’s third score of the quarter. Parachek threw a 14-yard scoring pass over the middle to younger brother, Brennen, for a 21-0 lead with 2:45 left in the first. 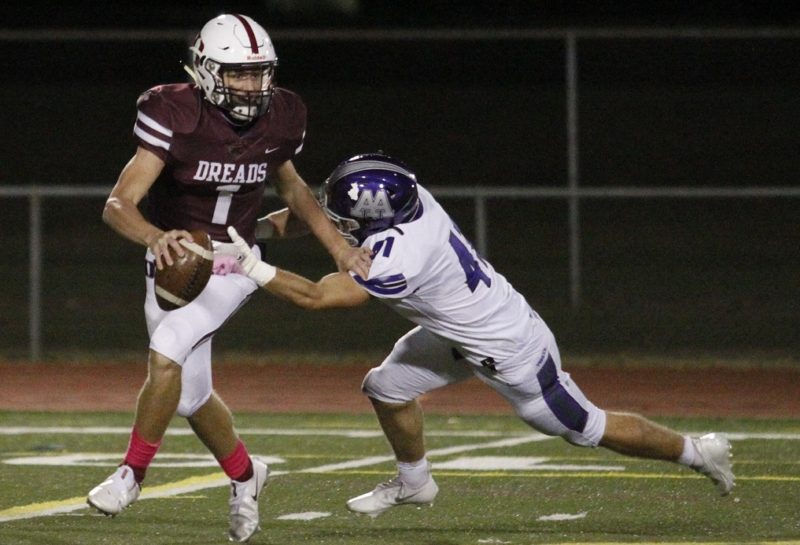 Pioneer got on the board after a nice drive down the field. Quarterback Grant Nelson made a nice run up the middle from 14 yards to put the visitors on the board. The two-point conversion failed, but Pioneer cut the deficit to 21-6 with 1:13 left in the opening quarter.

Dexter did what good teams do – they answered. Parachek threw a pass over the middle to Fuson who caught the ball near midfield and outran the Pioneer secondary to the end zone for a 58-yard scoring play and a 28-6 lead.

Another highlight – the Dexter Marching Band put a “crown” on the evening with a fantastic performance of a Queen medley during halftime. Bravo!!!