The Dexter field hockey team is preparing for the state playoffs and it’s hard not to think about last November on a cold afternoon in Chelsea. Rachel Gesell takes us back …

The Dexter field hockey team not only celebrated beating Pioneer to win the school’s first Division 1 title but also celebrated all the hard work, effort and determination they put into winning it all. The thrill and joy and excitement could be seen in every player’s huge smile.

“The 2020 seniors were so determined to win the state title which pushed us all to work super hard,” says Gesell. “I think that from that experience I learned how to work towards a goal and actually achieve it. It also taught me to keep setting goals even after you reach what you were originally working toward.”

With a new season, comes new goals. Meet the new goal – same as the old goal.

“This year is a new year,” Gesell says. “We can’t be satisfied with the fact that we won the state title last year. We want to win again. That experience taught me how to be a good leader by watching the seniors from last year who led our team.”

Gesell is now one of those seniors and an anchor to a young defense that has been up to the challenge. “Rachel has taken on a big role in the defense and has really stepped up this season,” said Dexter Coach Keely Tamer.

The Dreadnaughts enter the postseason with a 13-0-1 record. The new defense has recorded 10 shutouts and allowed just seven goals all year. That’s called stepping up.

Gesell moved from left back to sweeper this year. Like a good sweeper, she’s picked it up pretty well.

“In my new position being a good communicator on the field is a key part of it,” she says. “So, one of my goals for this year was to work on being a loud talker on the field and a good leader. I also wanted to become a strong and consistent defender which are important qualities of a successful sweeper.” 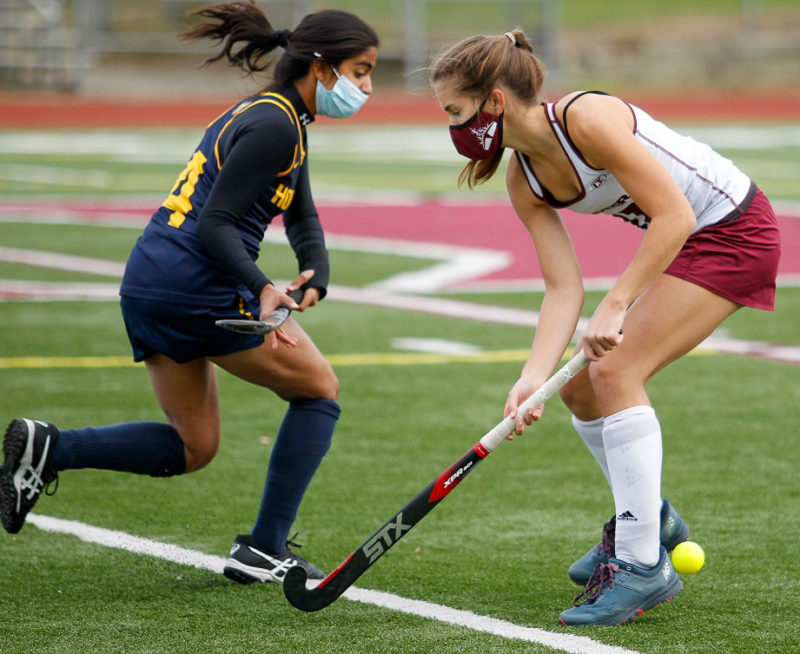 She certainly had a “successful sweeper” as a good teacher. One of the best players in the state, Claire Vaughn, played sweeper for the Dreads last season. “I learned a lot from Claire last year,” she said. “I definitely have looked up to the way that she led our team.”

Dexter field hockey has been successful for years. They are one of the elite programs in the state. And Gesell has some thoughts on why that is.

“We have always had amazing coaches that volunteer so much of their time to the program,” she says. “Our coaches teach us more than just how to be successful in field hockey, they teach us how to be good leaders and good teammates which can translate to our future careers.

“I also think that our program has a culture of hard work and not being satisfied when we reach one of our goals, but instead, always wanting the next thing while still celebrating our successes.”

Speaking of successes, Rachel, the daughter of Ralph and Debbie Gesell, has a 4.0 GPA and is a member of the National Honor Society. She says her school challenges have gotten better.

“School is going pretty well, but it’s definitely a lot different from what the beginning of school was like during my other three years,” she says. “At first it was hard to get used to logging into class on zoom every day and then doing all of my classwork on the computer.

“Now I have a better routine. I would say the biggest challenge for me is not being able to work on stuff during class and being able to ask the teacher questions face to face.”

But right now she is focusing on the playoffs and enjoying her senior year of field hockey with the Dreadnaughts.

“We are definitely a very competitive team which makes everything that we do a competition,” she says. “The competitiveness also makes our team really hard-working which is why we have big goals like winning states again this year.

“Another goal we have that contributes to our success is that we try to give all that we have while we’re playing. Even if what we can give looks different every day.”

As the No. 1 seed, they are looking like the favorites at the moment to repeat as D-1 state champions.

Written By
Terry Jacoby
More from Terry Jacoby
The Dexter field hockey team has made making the Final Four a...
Read More