With the football season getting off to a late start and teams missing games for various reasons across the state, the MHSAA created a Regional playoff system in which every team qualifies for the postseason. A release of all pairings, plus information on purchasing tickets digitally and attendance limits, will be released by the MHSAA to schools and the media early Sunday afternoon. Game dates and times will be filled in Monday.

Also, worth noting, there will not be a selection show this season on FOX Sports Detroit and teams must have four games to be eligible for the playoffs, or receive a waiver from the MHSAA. And because there are fewer than 512 11-player teams intending to play, a number of top seeds will receive first-round byes.

Let’s take a look at where Dexter finds itself with one game left on the schedule – Friday night at home against Pioneer – and how a few of the teams in their Regional/District are faring so far in this rollercoaster 2020 season.

The teams will be seated 1-8 in each region and that will create the first round of playoff games with the first seed playing the eighth seed and so on down the list.

Dexter landed in Division 2, Region 7, District 13 along with Temperance Bedford, Livonia Churchill, Livonia Franklin, Dearborn Heights Crestwood, Lincoln and Ypsilanti. That’s only seven teams so perhaps the top-seeded team will get a bye. 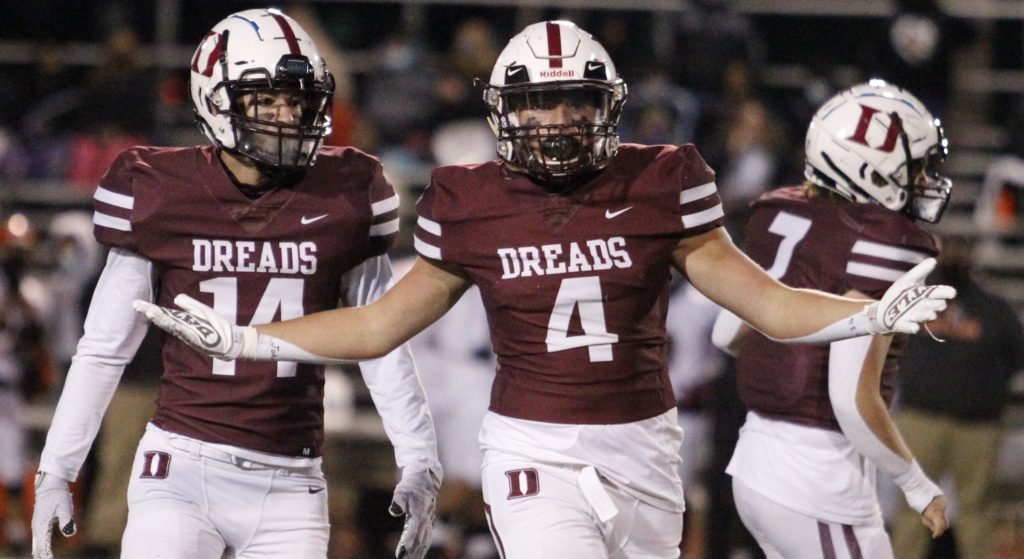 The Dreadnaughts will finish the season against Pioneer, a team that has yet to win and lost their standout starting quarterback Conor Easthope in week one. Pioneer lost 14-7 last week to Ypsilanti and have scored just 22 points in four games.

If the Dreadnaughts can pass, run and kick that game into the win column, a 4-2 record should give them a good seed and a favorable opening-night matchup.

So, who will be waiting for the Dreadnaughts in the postseason?

The only undefeated team in the District is Crestwood. The Chargers are 5-0 and have knocked off Redford Union, Melvindale, Robichaud, Redford Thurston and Garden City (last week 21-12). They face New Boston Huron (4-1) this Friday.

Another interesting team in the mix is Livonia Churchill, who knocked out Dexter 41-39 in last year’s opening-round playoff game. The Chargers also have a shot at the top seed with a 4-1 record after beating Wayne, Dearborn, Franklin and Stevenson (24-20, Friday). The Chargers, whose only loss was 27-22 to Fordson, finish against undefeated Belleville (4-0) on Friday night.

Bedford is a team to keep an eye on despite a setback on Friday night. The Kicking Mules lost 28-6 to Monroe to drop to 3-2 on the season – and one of the wins was against Academy for Business and Tech. Their other loss came to Saline 56-14.

Bedford finishes against a strong Woodhaven team (4-1 on the season).

Livonia Franklin is 2-3 on the season with wins over Stevenson and Fordson. Their losses came against Churchill, Westland John Glenn and Belleville (56-0). They face Dearborn (2-3) on Friday.

Ypsilanti is now 2-3 after the win over Pioneer. Their other win was a forfeit (Huron). The Grizzlies face New Standard (they are 0-5 and have lost all their games by double digits) on Friday. So pencil in Ypsi at 3-3.

The season could very well end with Crestwood 6-0 or 5-1 to grab the top seed. Churchill and Dexter could land at 4-2 while Franklin, Ypsilanti, Lincoln and Bedford could all finish 3-3.

Where they go with that is anyone’s guess.