It went pretty much as expected – one team finished and the other didn’t. And it’s the team that finished that is not finished in this crazy 2020 season.

Skyline scored two goals in the first half and held off hard-charging Dexter in the second half to escape with a 2-0 win in a Division 1 District semifinal game on Tuesday before a nice crowd on a nice day in Dexter.

The Eagles land in the District finals where they will face Saline for the third time this season. The two teams split and the rubber match will have a lot more on the line.

Saline defeated visiting Pioneer 1-0 in penalty kicks after a scoreless regulation and overtime in the other semifinal game on Tuesday.

And “escape” is exactly what the Eagles in their semifinal game. The Dreadnaughts switched gears in the second half, playing with much more energy and urgency. They created a number of quality scoring chances – including two with around 8 minutes to play in the game off direct kicks – but couldn’t get that first goal to drop.

Skyline wasn’t exactly playing on its heels in the second half, but they didn’t have the same running shoes they wore in the first half.

“I felt it was a game of two halves,” said Skyline Coach Chris Morgan. “We played really well throughout the first half. Then, we kind of lost our way in the second half.” 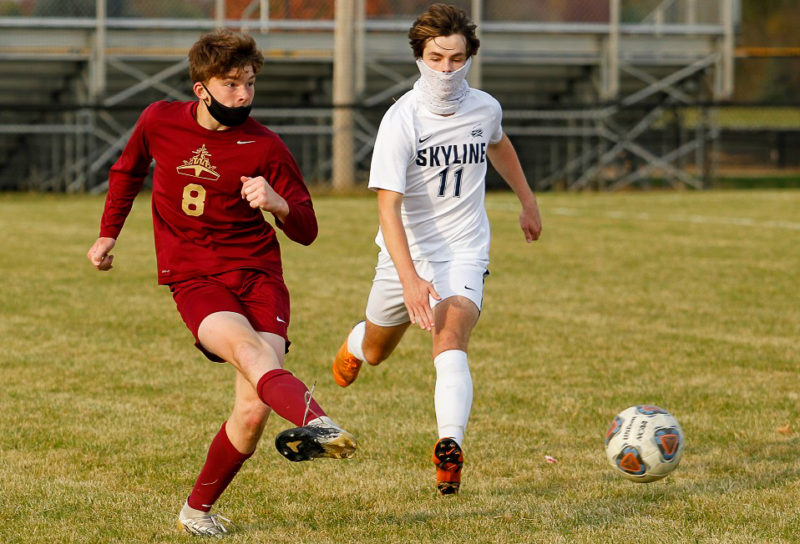 Morgan was certainly pleased with his defense. Keeping the Dreadnaughts, who came into the game unbeaten and with just one tie, off the scoreboard is no easy task.

“It was a solid defensive effort throughout the game, but we’ll have to do a better job taking care of the ball against Saline,” Morgan said. “We gave the ball up in some dangerous places and we’ll have to avoid doing that in the next match.”

The Eagles came out flying in the first half and created more quality scoring chances than Dexter. It paid off at 15:22 when August Decz lofted a perfect ball from the corner of the penalty box that hooked into the upper right corner. Dexter’s keeper had no chance on the ball off Decz’s foot – it was just a perfect shot.

Dexter’s keeper also had no chance on the second goal. From about 25 yards out, Gabe Kellman fired a shot that deflected off a Dexter player and changed course landing in the back of the net.

Kellman’s goal with 2 minutes left made it 2-0.

But give the young Dreadnaughts credit for not giving up. They battled the more experienced Eagles throughout the second half and all the way to the final whistle.

Written By
Terry Jacoby
More from Terry Jacoby
Dexter now has a victory. But don’t think this program, or this...
Read More