Jack Kolka remembers how his soccer career first kicked off.

“I first got interested in the sport when I was put into the Hamburg Township League with some kids of my parents’ friends,” he says. “I grew up playing with some of the kids that I still play with today like my high school teammates and co-captains Nick Williamson and Hayden Newton, which has really made me enjoy the sport.”

Kolka, Williamson and Newton have certainly come a long way and they aren’t playing in the Hamburg Township League anymore. They are playing for the Dexter HS varsity soccer team in a District semifinal game against one of the top teams in the state tonight (Oct. 20) when they take the pitch against Skyline.

We should mention that Kolka, Williamson, Newton and the rest of the Dreadnaughts also are among the best teams in the state. Their unbeaten (one-tie) regular season and SEC White Division title are proof of that. But they have a big “prove” tonight against the high-flying Eagles. 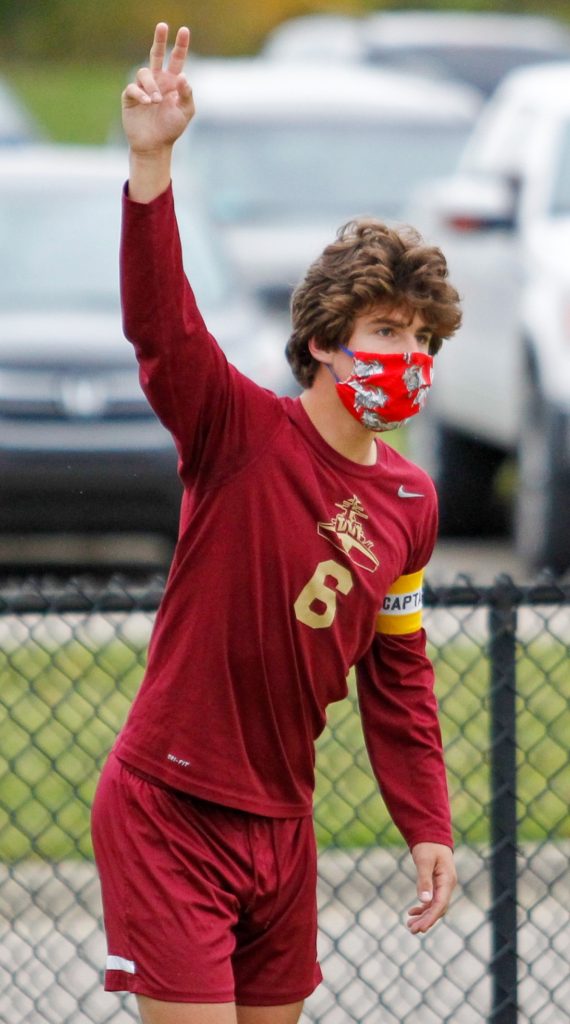 “We need to focus on one game at a time and not get ahead of ourselves,” Kolka says. “I think that Skyline will definitely be the hardest game that we’ve played all season. As a team we need to finish our chances on goal and not make any mistakes in the back and we should be all set.”

Kolka, whose twin brother, Conor, is an outstanding runner on the DHS cross country team, plays center back for the Dreadnaughts and is a two-time All-Conference player for Coach Drew Ducker. He also had two goals – both off corner kicks – in Dexter’s 3-1 District opening win last week against Huron.

The senior has helped captain what he calls a “pretty young team.”

“We only start four seniors, but this doesn’t affect us in any way with team chemistry,” he says. “We know that every person on the team has their key role to play no matter the grade. We have a very upbeat and loose team atmosphere and everyone gets along but when we need to work we work.”

They have certainly had their work cut out for them this year – as every team has.

“There have been a few challenges throughout the soccer year,” he says. “One of the biggest things is wearing a mask while you play. It definitely makes playing a lot more difficult because you don’t get as much oxygen anymore and you’re always breathing in hot air. With that being said, Dexter has been by far the best team to wear the masks properly.”

Jack, the son of Nikki and Jason Kolka, has played for years with club team Michigan Alliance. “Club soccer is way different than high school soccer,” he says. “In club soccer the game is way less physical and the atmosphere is way different.”

It should be physical tonight against Skyline. And the atmosphere will certainly be different with everything on the line.

Written By
Terry Jacoby
More from Terry Jacoby
The rain held off and the temperatures were cool and comfortable with...
Read More