Dexter finished off the week on Thursday by finishing off Grosse Pointe South 7-2 at Al Ritt Stadium. The defending D-1 state champions improved to 13-0-1 on the season with one game left on the regular-season schedule – Monday at Saline.

In the win over Grosse Pointe South, Kylee Niswonger (right photo) was awarded the Golden Stick for “working hard to every ball and being a rock in the midfield!” 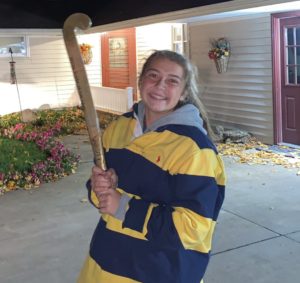 The Dreadnaughts scored three times in the first quarter to set the tone, then added four in the third for good measure in the win over GP South. The visitors scored both of their goals after trailing 7-0.

Abby Tamer had two goals and two assists  and Shannon Schoch had two goals and an assist for the Dreadnaughts. Niswonger (one assist), Annalisa Shehab and Lindsey Vantine also scored for Dexter. Esther Hashikawa and Hannah Baldwin split the goaltending duties.

Dexter opened the week with a 4-0 win over East Grand Rapids.

Marissa Skinner had two goals and Tamer and Schoch each scored once. Niswonger and Gracie Burns had assists. Hashikawa and Baldwin split the shutout.

Written By
Terry Jacoby
More from Terry Jacoby
Dexter’s Michael Steinbeck, who has been working in multi-media for over 20...
Read More