In less than a week, the Skyline and Pioneer boys’ soccer teams have met on the pitch with mixed results. In other words, Skyline won one and Pioneer took the other.

Getting to a rubber match won’t be easy for either side as the Ann Arbor teams prepare to open District play on Thursday. And the road they each must travel will more than likely go through SEC league champions – Dexter, for example.

The Division 1 District 2 soccer tournament hosted by Saline includes the four best teams in the area and promises to feature plenty of emotion, intensity, physicality and outstanding soccer, and while a bounce here or there might decide the outcome, the team left standing will have certainly earned the moniker of champion.

Saline won its third straight SEC Red Division title with a 10-1-1 record. Their loss came against Skyline (1-0) while their tie was against Pioneer. Saline also beat Pioneer 1-0 in a game decided in the final seconds. So, these matches were all close both on the pitch and on the scoreboard.

Pioneer is the defending District champion, having knocked off both Skyline and Saline last season. They return 17 seniors, so experience will be playing on their side of the turf. Skyline also has 17 seniors on the roster and a coach who has taken his team to a state title just three years ago.

But Saline has been impressive this year and are the team to beat after winning the SEC Red title. And knocking off the Hornets would create quite the buzz around the state.

While the Big Three were battling it out in the SEC Red, the Dreadnaughts were dominating the SEC White. Dexter won its second straight league title with an almost perfect 11-0-1 record that included a 5-0 win over rival Chelsea earlier in the season and a 2-0 win Saturday over the visiting Bulldogs.

In Saturday’s win over Chelsea, JP Assenmacher scored on a nice cross from AJ Gordon, and Nick Doletzky also scored for the Dreads. Wiley Smith and John Waidley combined for the shutout.

Dexter has plenty of both talent and experience and they will be out to prove that the white goes just as well with a championship as red does.

The four teams have relatively easy first-round games (although no one would go on the record to verify that statement). Dexter faces the toughest test with an improving, but young Huron (4-7) team at 5 p.m. on Thursday at Dexter.

The semifinals is where things get interesting – and highly competitive. 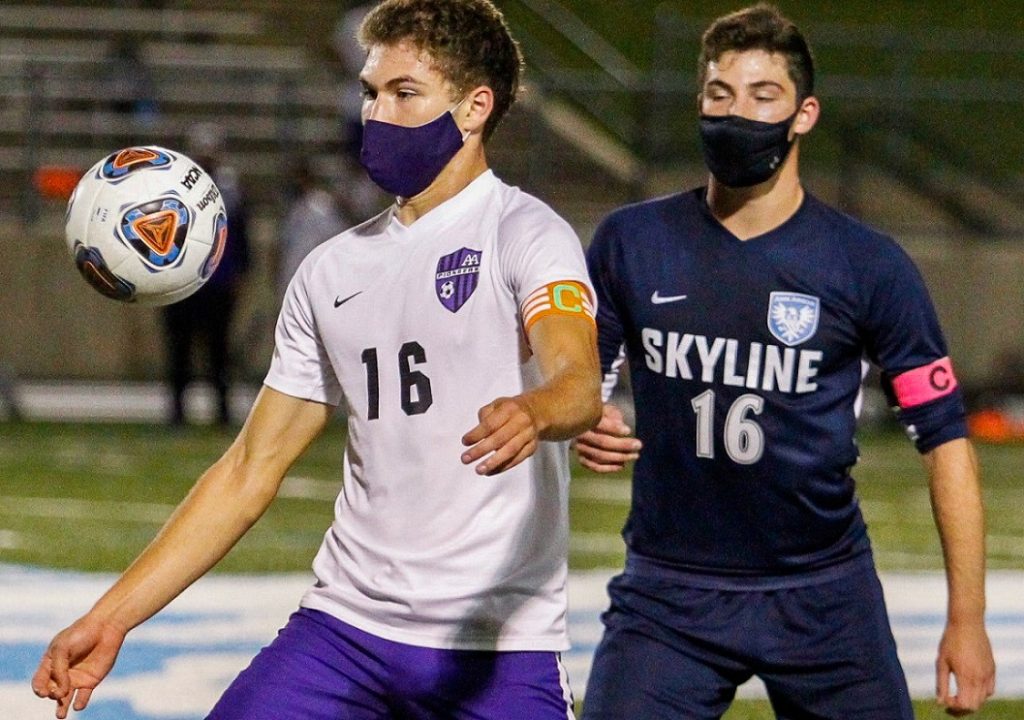 If all the teams hold serve, Pioneer will face SEC Red Division champion Saline and Skyline gets SEC White Division champion Dexter. Both games are at 7 p.m. on Tuesday, Oct. 20. And if we are reading this right, Pioneer and Dexter will be the host teams.

The big four will be down to the big two for the finals at 7 p.m. on Thursday, Oct. 22 at Saline.

After losing 3-2 last week to Skyline, Pioneer got goals from Garret Stroud and Edwin Ruiz-Gomez and keeper Zach Wilhelm pitched the shutout in Monday’s 2-0 win over the visiting Eagles.

“It was a hard-fought match between two rivals who respect one another and each have high aspirations every year,” said Pioneer Coach Jon Sundermann. “The ball bounced our way resulting in two quality finishes for us.”

The victory was much more than another notch in the win column.

“It definitely provides a strong confidence boost heading into one of the tougher Districts around,” Sundermann said. “Pioneer, Skyline, Saline and Dexter are all top-notch programs this year.”

Skyline Coach Chris Morgan said: “It was just not our night. Pioneer was better (on Monday). But we learned some good things about ourselves. We also need to capitalize on our chances.”

The team that does capitalize on their chances could very well end up District champions. But even that won’t guarantee anything when four very evenly matched teams are put into brackets and required to kick themselves out.