There were several times during Wednesday’s 5 minute phone conversation that Dexter senior quarterback Colin Parachek mentioned the word “rollercoaster” when describing the 2020 high school football season. He also mentioned several times just how “grateful and fortunate” he is to be playing the game he loves this season, considering everything going on in the world.

But in between rollercoaster and grateful and thankful and fortunate was the undeniable trait that most successful quarterbacks have in their DNA. He doesn’t take for granted that he’s been given this gift to play, but once he steps out on the field, that competitive fire takes over.

It’s like, now that we’ve been given the chance, we might as well take advantage of it and win some football games. When the ball is snapped, it’s all about being successful, making plays and putting up more points than the opposition.

“We are a senior-led team and everyone realizes that we need to make the most of this opportunity we’ve been given and that includes following safety protocols,” Parachek says. “We have to prepare for whatever comes our way because we realize there could be a breakout next week and it could be all over. If given the chance, we need to play like we know we can and get ready for a deep run in the playoffs.” 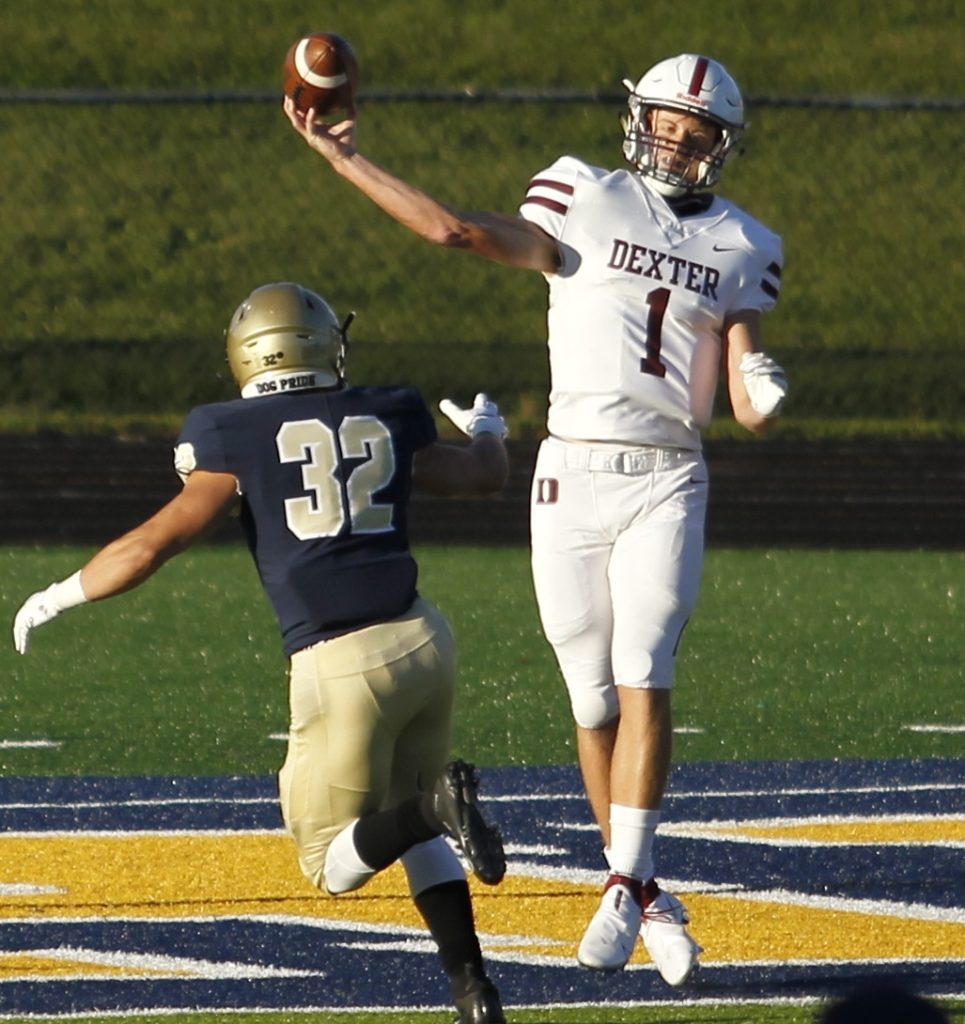 Every team will make the playoffs in 2020 and teams have been assigned regionals and districts where the schedule will be determined after the completion of the regular season. Dexter’s regional (seven, District 14) includes Bedford, Livonia Churchill, Livonia Franklin, Crestwood, Lincoln and Ypsilanti. The teams will be seeded based on regular-season records.

“At the end of the day, the playoffs are what we work for,” Parachek said. “This year is a little different, but we want to go out and win our last three football games and be playing our best football when the playoffs start. We are as positive and optimistic as a 1-2 team can be right now. We have made a few mistakes that have proven costly, but we can fix those and we know what we need to do to get better.”

“We went to the JV game against Tecumseh on Thursday and heard that they were going to be out of school for two weeks because of COVID,” Parachek said. “We were worried that the varsity game would be cancelled. We found out at 11 a.m. the next morning the game was off. We heard an hour later that we were playing Gladwin that same night. It was a crazy situation and a very different experience. We were on the bus at 3 p.m. heading to Gladwin for a 7 p.m. game. But we were glad to be playing football no matter where it was.”

Parachek did whatever he could to help get this football season off the ground – including a trip to Lansing to speak on behalf of players eager to compete in 2020.

“I was devastated and heartbroken when they announced the season had been cancelled,” he said. “But I did what I could to try and get a season. I went to a rally at the Capitol in Lansing and spoke there to advocate for what I felt needed to be done at the time. I felt like all fall sports including football should be allowed to play. And when they reinstated fall sports I was just thrilled to be able to get a chance to play my senior year.”

Meanwhile, Parachek continues to search for his next “team.” The quarterback will certainly land somewhere, most likely a Division 1 program. Several MAC schools are on his radar at the moment.

But the NCAA has limited contact between recruits and schools so he continues to try and figure things out, but probably won’t be making any decisions until next year.

Written By
Terry Jacoby
More from Terry Jacoby
The Dexter Dreadbots spent the weekend in Belleville and after a long...
Read More