It was a matchup of defending state champions on Monday night when Skyline hosted Dexter on the field hockey pitch. The Dreadnaughts won Division 1 last season while the Eagles were the Division 2 champions, earning a spot in D-1 this season.

If there were any doubts the Eagles could play at this level, it was all but eliminated on Monday when Skyline played talented and experienced Dexter to a 3-3 draw. Skyline came into the game with a 4-1-1 record, already proving they truly belong.

But Monday was a special night for the Eagles, looking to build confidence and take their game to the next level.

And Dexter has been at the highest level all season. The Dreadnaughts entered the game with a 9-0 record. Their recent tough stretch included impressive wins over Mercy (6-0), Pioneer (2-1) and Saline (2-0). The goal by Pioneer on Oct. 1 was the first scored on Dexter all season.

So was Skyline thrilled to have tied a team like Dexter or are the Eagles slightly disappointed they didn’t get the victory?

“Half and half,” says Skyline Coach Nicole Barrett. “They are happy with their performance and the fact they played well. It was a good test for us and we stepped up to the challenge.”

Barrett said it was a great game, and a great team effort from the Eagles.

“Our defense stepped up, made strong tackles and didn’t foul,” she said. “Our midfield had some great passing and made great connections from defense to offense. And our forwards worked really hard in the circle and finished three times.

“Both teams played well. Dexter is a strong team, and we knew we had to play a full 60 minutes and we did.”

“They got behind our defense with balls through the seam in the first half and we were on our heels,” she said. “We made good adjustments in the second half and I am happy with how we played, we just need to exhibit better discipline in our circle to finish opportunities.”

Dexter finished an opportunity early in the game to take a 1-0 lead, but Skyline had a 3-2 lead by halftime.

Shannon Schoch had first-half goals for Dexter while Abby Tamer scored in the third quarter for the Dreadnaughts to even the game at 3-3. Gracie Burns assisted on Schoch’s first goal.

Cami Wiseman had two goals and Morgan Nalepa scored once for the Eagles. Coco courtright had three assists and Molly Watza had a defensive save. 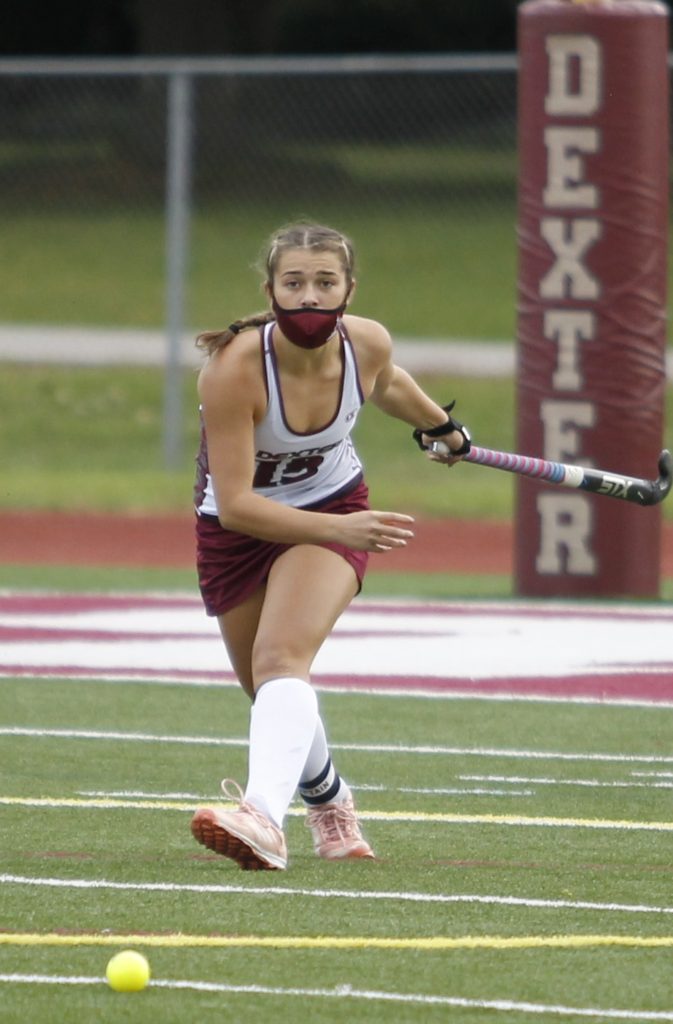 Erin Page had nine saves in goal for the Eagles and earned praise from her head coach.

“She had a great game and made saves that gave her team confidence,” Barrett said. “She inspired her team by making key saves.”

Dexter was coming off an impressive 2-0 win on Friday over a strong Saline team at Al Ritt Stadium. Tamer had both goals for the Dreadnaughts while Schoch and Faith Anderson picked up assists.

Esther Hashikawa and Hannah Baldwin split the goaltending duties to earn their eighth shutout of the season.

The Eagles, who were coming off a 4-2 loss to Pioneer on Wednesday (Sept. 30), play at Pinckney on Wednesday (Oct. 7) and host Novi on Friday.

Written By
Terry Jacoby
More from Terry Jacoby
After graduating with a MS in Speech-Language Pathology from the University of...
Read More