While the numbers don’t add up to a state title this year for the Dexter boys’ swimming and diving team, the Dreadnaughts aren’t about to coast when/if this year’s state finals are held.

Not a chance. You don’t get to be the best without giving your best and that’s what Dexter has long brought to water sports over the years.

“I’ll admit it, this team simply isn’t as strong as it needs to be for us to win states this year but that doesn’t mean we shouldn’t try our best,” says Dexter standout senior swimmer Tanner Sharp. “I’ve seen everyone who’s going to swim at the state meet put 100 percent effort into every practice all season long and it will pay off at states.

“Effort in practice has been stressed so much my entire career if you want to perform well after taper. We’re all shooting to place fairly high in our events this year. We will show everyone that Dexter is still alive and pushing hard.”

Tanner isn’t just shooting high in his events, he’s shooting for the top. And hopefully, he gets a chance to take aim at the top.

“Right now my biggest goal is to win the 100 breaststroke and place at least top three in the 50 freestyle,” he said before the MHSAA suspended all sports just days before the swimming state finals. 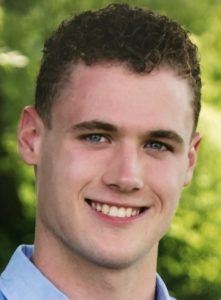 It was a fun ride for Tanner, in his final season with the Dreadnaughts.

“The team chemistry just fits so well this year,” he says. “Coach McHugh decided that we should try to have a little more fun this season and almost every day has been so fun and memorable. These are a good group of guys who would do anything for each other. There hasn’t been any team drama or tension at all this year which is what made this season much more enjoyable.”

Sharp had an outstanding junior year last year for Dexter, helping the team win its fourth straight MHSAA Division 2 state title. He finished seventh in the 50 free (21.55) and was fifth in the breaststroke (58.24). He also was a member of the medley relay team which took second and led off the 200 free relay team, which also placed second.

“One of my biggest highlights from last year was being able to break the Dexter varsity record in the 100 breast at the state meet,” Sharp said. “It was one of my biggest goals at the beginning of the season.

Tanner, the son of Stephanie and Jeff Sharp, began swimming when he was about 8 years old. He says at first it was a hobby or a way to hang out with some of his friends. But after a few laps around the pool, he soon realized swimming was what he loved to do the most.

“I think what really made me like it was the fact that, while it’s still a team sport, it’s a lot more individualized,” he said. “It gave me the opportunities to focus on myself and the things I could do to get better.

“One of my biggest fears in sports has always been letting my team down. It’s why I was never too excited to play any other sport. Swimming really takes a lot of that pressure off. While I know I’m still on a team and I have to perform the best I can for my teammates, I’m still a lot more relaxed when I enter the pool knowing that it’s just myself that I’m with when I’m in the water.”

Sharp admits there was a bit of a transition when he first jumped in the pool at DHS.

“My freshman year of high school definitely brought a new challenge to me,” he says. “I knew full well going into it that high school swimming was not going to be easy in almost any sense. Becoming a new member of the team, seeing all these amazing and talented swimmers was pretty nerve wracking to me. It made me feel like I had a lot to live up to.”

He did just fine, regardless. And maybe that type of understanding and approach helped him better adjust to the highly competitive nature of high school athletics. Sharp swam the 100 free and 100 backstroke as a freshman.

“My times weren’t terrible, but they definitely weren’t anything to brag about,” he says.

Sharp took off his sophomore year.

“That year, after looking through my best times over the summer season, coach McHugh and I thought it best to change my events to the 50 free and 100 breast,” he said. “It was at the Freshman-Sophomore meet that year when I was able to get my first state qualifying time in the 50 free. It was really one of the greatest moments of my high school career.”

“It was the first team I joined when I started swimming,” he says. “DCAC is definitely where I put most of my focus into my technique whereas high school focuses more on endurance and intensity. I have DCAC’s head coach Dave Gendernalik to thank a lot for all he’s done for me ever since I started swimming. I would not be where I am today without that team.”

“I am very excited to see how far I can push myself in the coming years,” he says.