Paul Schaefer offers a unique – and pretty funny – explanation on what got him interested in swimming at Dexter High.

“I decided to swim because all the water polo kids wanted me to. Little did I know they just wanted to see me suffer,” says Schaefer. “I was one of the slowest on the team my freshman year and qualifying for the MISCA meet or the State meet was entirely out of the question.”

But as a sophomore, Schaefer started taking things more seriously and everything changed – except for maybe the suffering.

In just his second year of swimming at DHS, Schaefer had qualified for MISCA in the breaststroke.

As a junior, he helped Dexter win another state title. 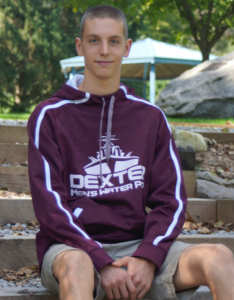 “It was awesome to win states last year and to be a part of an A relay with some crazy fast kids,” he said. “I didn’t perform at my highest at states last year due to an unfortunate strike of illness.”

As he swims his final lap for Dexter, Schaefer wants to go out with a flourish. All of those years of “suffering” are about to pay off. He hopes to land in the top eight in the 200 and 500 freestyle events at this weekend’s Division 2 State Finals.

“This year is unlike any of my previous years,” says Schaefer. “The goal has always been to win states, which we’ve accomplished the last four seasons, but we know that’s unrealistic this year. This weekend will be about individual performances and getting behind each other to record memorable swims.”

Getting the best performances out of each other has been standard practice for Dexter swimming. And so has been having fun.

“Pushing ourselves to the limits has helped us realize the importance of having fun and comedic relief,” Schaefer says. “We wouldn’t be able to make it through the season in the same manner without all the random weirdness each of us provides, some more than others.”

Schaefer, the son of Donna McMahon and John Schaefer, began his swimming career at the Ann Arbor Country Club in his neighborhood at a young age. This weekend will be his final lap around the competitive pool but what a great run it’s been.

As for the next splash?

“I enjoy web developing and various application developing along with organic farming,” he says.