Her play helped the Dexter girls’ basketball team light up rival Chelsea on Friday. Afterwards, her smile lit up the hallway, the gymnasium and most of Washtenaw County. Dexter’s Sydney Pnacek left nothing in the margins when talking about her team’s incredible 47-41 overtime victory over rival Chelsea.

“It’s so hard to describe what I’m feeling,” she says. “It just feels great.”

Things always feel better and more meaningful when they are earned and the Dreadnaughts certainly earned this victory over the Bulldogs. It didn’t come easy even though it started out easy for Dexter as the visitors jumped out to a 12-0 lead in the first quarter.

“Our goal was to be strong from the start because the last time we played them we got off to a slow start and that’s what killed our momentum,” Pnacek said. “So we really wanted to get off to a good start this time and give us some confidence.” 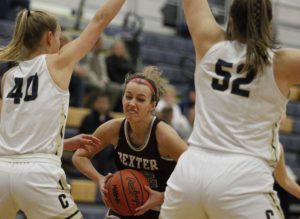 It wasn’t a good start, but a great start. Taking a 12-0 lead on Chelsea’s home floor, no one saw coming; but everyone saw what was coming next. The Bulldogs are just too good, too deep and too well-coached to get blown out on their home floor. It just wasn’t going to happen, and just like that, the Bulldogs were not only back in the game, but in the lead after a 14-0 run.

Chelsea led 22-16 at halftime and seemed to not only take over the lead but the game as well. Inside the Dexter locker room, the Dreadnaughts talked about focus and confidence.

“Our third quarters this year have always been our worst quarters this year so we talked about making it our best quarter this time,” Pnacek said. “It’s been our goal all year to play better in the third quarter. We talked about it being all about heart and how they weren’t more talented than us or better than us and it was going to come down to effort.”

Pnacek led the way with 12 points, including a big drive to the basket for a bucket and two free throws in overtime. She also had a sweet move to the basket in the fourth quarter to give Dexter a 37-36 lead. 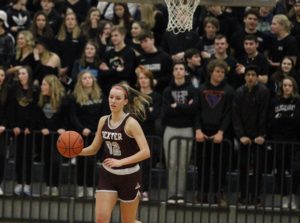 “This was our first overtime game,” Pnacek said. “We felt like we were in control of the game so we had to keep playing at that level and intensity and not take a step back in overtime.”

The super sophomore says the win over Chelsea was a huge step forward and gives the Dreadnaughts even more confidence heading into the final week of the regular season and then on into the postseason. Dexter is in the Brighton District and the host Bulldogs are clearly one of the favorites along with the Dreadnaughts, who just proved that they can beat Bulldogs in their own gym.

“This was huge,” she said with a huge smile. “We feel like we are going all the way now.

Written By
Terry Jacoby
More from Terry Jacoby
This is a time like never before when it comes to technological...
Read More