A basketball game is often a rollercoaster on steroids and the team that best deals with the ebbs and flows is often the team that ends up with the win when the clock hits zero. The Dexter girls’ basketball team opened with their best start of the season on Friday night, jumping out to a 12-0 lead over host Chelsea, but it’s not how you start, but how you finish that wins basketball games.

The Dreadnaughts finished on top at the end as well, but in between, it was a rollercoaster ride of ebbs, flows, big shots, defensive stands, lead changes, and even overtime.

But when the clock hit zero, Dexter celebrated a 47-41 overtime victory over rival Chelsea, ending the Bulldogs’ undefeated run through the SEC White and avenging an earlier-season loss at Dexter. Both teams head to the final week of the regular season with just one loss in conference play.

This was another total team effort for the Dreadnaughts who got huge contributions from players up and down the roster. Six players scored five or more points in the victory. 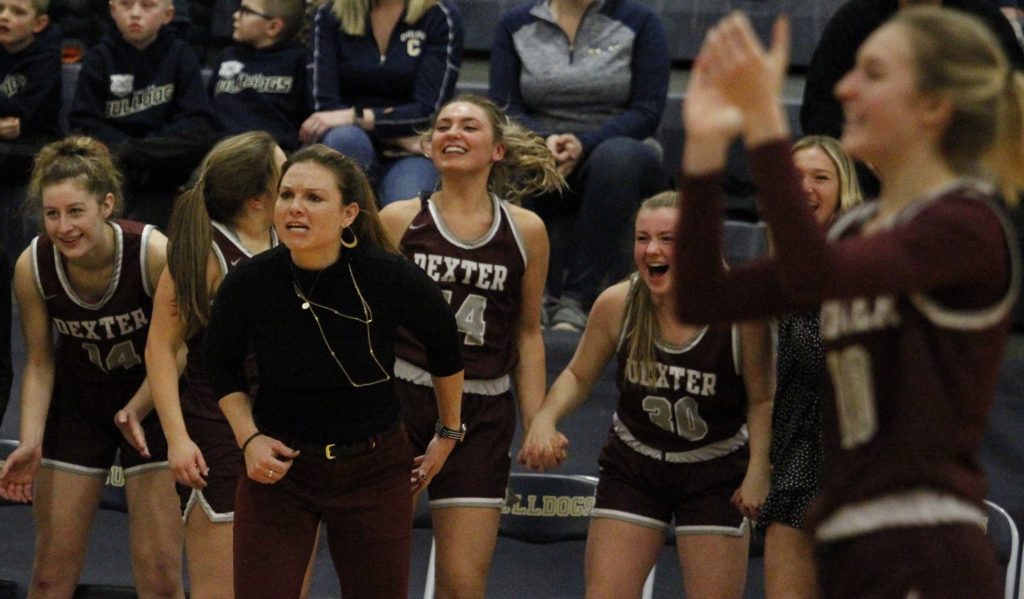 Sydney Pnacek led the way with 12 points, including a big drive to the basket for a bucket and two free throws in overtime. The talented sophomore also had a sweet move to the basket in the fourth quarter to give Dexter a 37-36 lead.

Speaking of big and overtime, Kylie Cabana got the Dreads rolling in the right direction in the extra period, knocking down two free throws in the first minute. The senior finished with 10 points, including the first eight to start the game.

Junior Olivia Mellifont, steady all game for the visitors, finished with eight points. Senior Kyleigh Valentine had seven points and Alayna Babut and Brianna Rodriguez each scored five in the win.

The two rivals headed to overtime – a fitting outcome for a very well-played and hard-fought basketball game – deadlocked at 37-37. And the Dreadnaughts didn’t waste any time putting their foot on the gas even if Chelsea responded by doing the same. 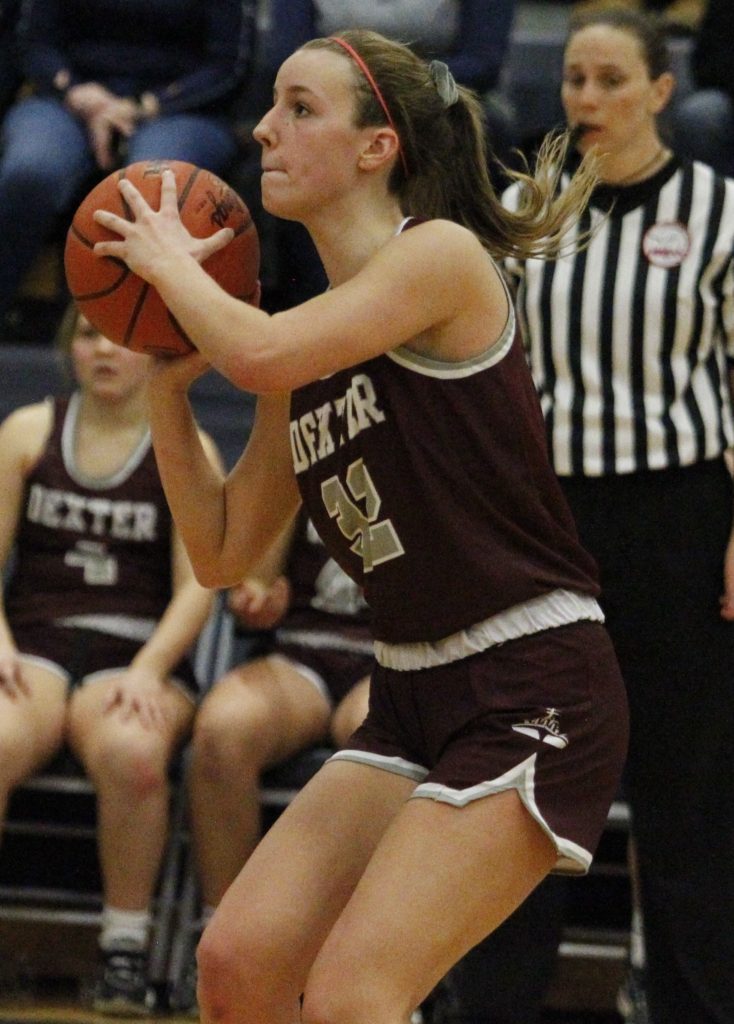 Valentine got Dexter rolling at the start of the game as she scored eight points including back-to-back triples to give Dexter a 10-0 lead with 2:42 left in the opening quarter. A basket by Pnacek pushed it to 12-0 before the Bulldogs finally got on the scoreboard.

But once Chelsea scored, they started to score often and cut the lead to 12-6 before the end of the first quarter.

And the Bulldogs kept right on rolling, erasing the early deficit entirely and taking a 14-12 lead with 5:45 to play in the second quarter. A triple from the corner by Babut put Dexter back in front 15-14 but Chelsea finished on an 8-1 run to lead 22-16 at halftime.

While Dexter did get off to a great start, not everything went their way in the first half. With 4 minutes to play in the half, Dexter had been called for eight fouls to just one for Chelsea. The Bulldogs didn’t commit a foul (at least weren’t called for a foul) the entire first quarter.

The Dreadnaughts also were whistled for FIVE traveling violations while the Bulldogs kept their feet to the floor and avoided the infraction all together.

Dexter played its best third quarter of the season and really showed another gear that may have caught the Bulldogs off guard. A nice move to the basket by Cabana brought the Dreads to within 22-20 and then Pnacek scored inside to push Dexter ahead 25-24.

Rodriguez hit a triple from the wing and then scored on a rebound to give Dexter a 29-25 lead late in the quarter. Simpson grabbed her own rebound after a miss and didn’t miss the second time to give the Dreads a 33-27 lead they took into the fourth quarter. 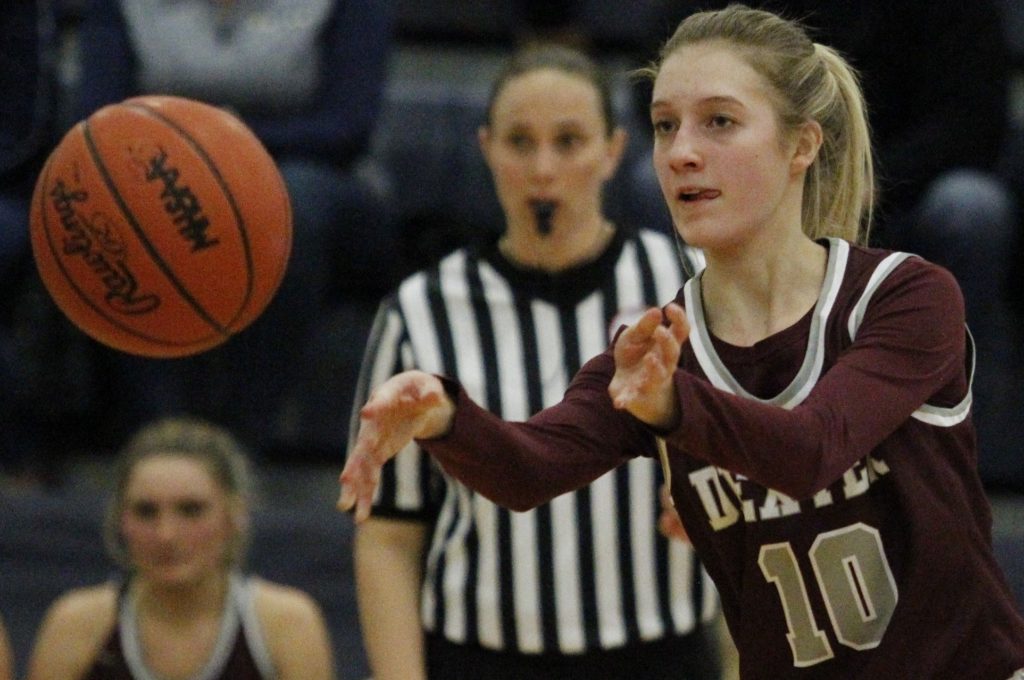 The Bulldogs came barking back though early in the fourth quarter. While Dexter had a few shots roll in and out, Chelsea’s Sarah Kennings knocked down a triple to push the Dawgs back in front at 34-33. Riley Davis, one of only two seniors on a very talented, deep and young Chelsea team, scored to make it 36-33.

Dexter’s Babut was fouled shooting a triple and hit 2 of 3 free throws to cut the lead to 36-35. Pnacek’s move inside and basket gave the Dreads a 37-36 lead but the Bulldogs hit a free throw to tie the game at 37-37.

Both teams had a chance to win in regulation but both teams stepped up on the defensive end to push the game into overtime. It was the only fitting conclusion of an excellent high school basketball game and a chance for a packed gym to enjoy a few more minutes of this long-standing rivalry. 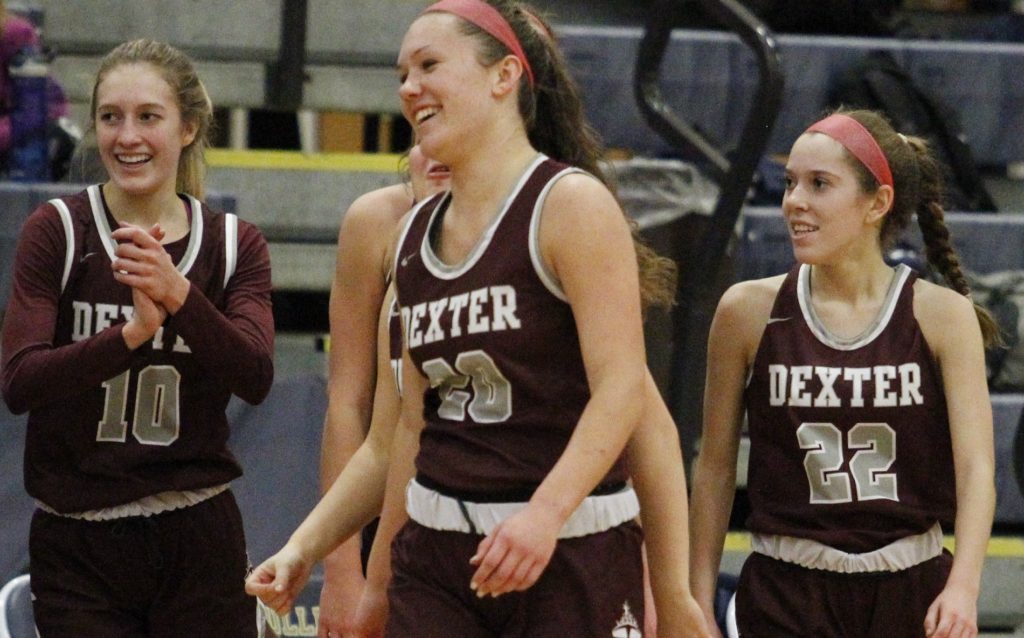 Written By
Terry Jacoby
More from Terry Jacoby
Tickets to the world premiere of “Sherlock Holmes and the Adventure of...
Read More