After the girls’ game went into overtime, the boys took the court on Friday night in the second game of the Dexter-Chelsea basketball double-header. And the boys didn’t disappoint as they too needed overtime before deciding on a winner.

The visiting Dreadnaughts had a chance to send it into a second overtime but the ball hit rim instead of net and the Bulldogs celebrated a dramatic and exciting 66-65 win over the Dreadnaughts. Dexter scored on a great tip-in by Brennan Parachek with .7 seconds left after the missed triple for the final points of the game.

The Chelsea win avenged an earlier loss to the Dreadnaughts at Dexter. Lincoln has already locked up first place in the SEC White.

Colin Parachek continued his impressive season with a team-best 19 points which included two triples in the second half and two more in overtime. While football is his sport of the future, the junior is clearly one of the top basketball players in the area.

The Dreadnaughts had a nice balanced scoring sheet against the talented Bulldogs with seven players scoring five or more points.

Brennan Parachek, only a freshman, scored four of his 11 points in overtime. 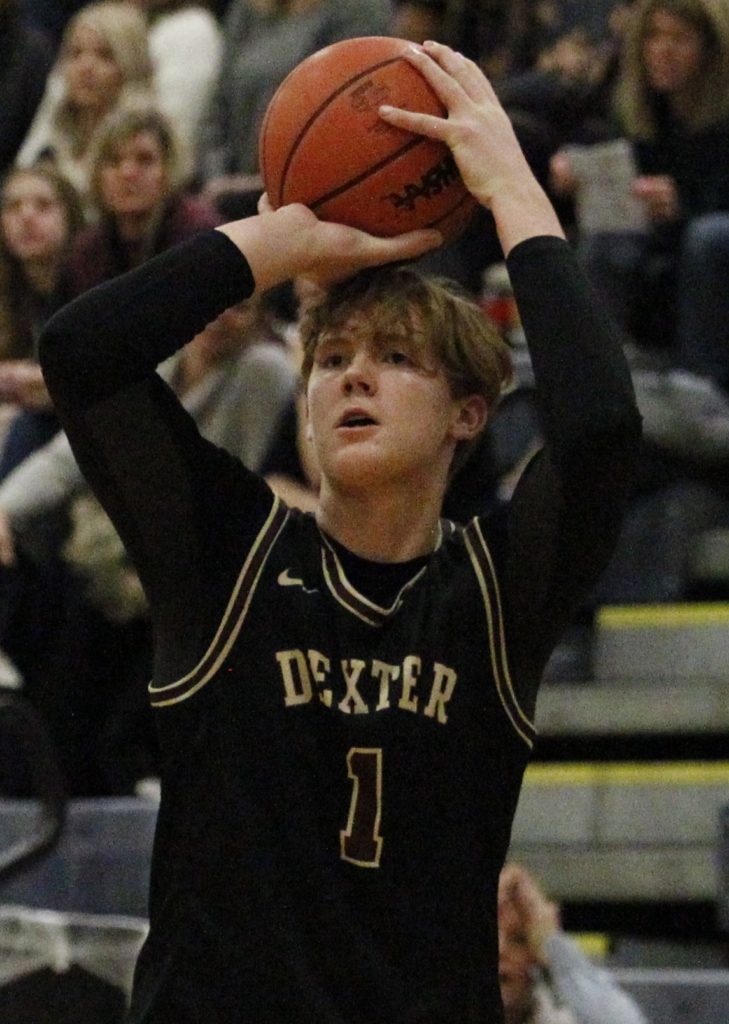 Cal Bavineau continues his strong sophomore season. The point guard did an excellent job running the offense, limited the turnovers and scored 10 points, including a couple of big three-pointers – one from half court!

With 2 minutes to play in regulation, Chelsea’s Adam Hauser hit a shot to push the Bulldogs into a seven-point lead at 56-49. But after Chelsea missed two free throws, Dexter’s Aidan Dexter knocked down two at the other end for a four-point swing and a 56-51 Chelsea lead with 1:15 left on the clock.

After a Chelsea free throw made it 57-51, Colin Parachek nailed a triple to cut the lead to 57-54 with 1:03 left and the Dreads were back in business and back in the game.

Again, Chelsea missed two free throws to keep the door open for the Dreads. And Trinkle kicked it in with a great basket inside despite getting fouled. The senior calmly stepped to the line and tied the game at 57-57 with 36.9 seconds left in front of the huge, loud and quite creative Dexter cheering section.

Neither team scored in the final seconds as the game headed to overtime.

The Bulldogs opened the extra period with a three-point play to take the lead. A basket by Brennan Parachek cut the Chelsea lead to 62-60. Down 63-60, Dexter missed a triple with 1 minute left in the game. Chelsea’s Hauser made two free throws to push the lead to 65-60 with 38.1 seconds left on the clock.

But with 18 seconds left, Colin Parachek nailed a triple to bring Dexter to within 65-63. Chelsea’s Owen Brown hit a free throw to give the Dawgs a 66-63 lead with 13.4 seconds left in the game. The Dreadnaughts had a good look at a game-tying triple but the ball didn’t fall and the Dreads fell to Chelsea for the first time this season. 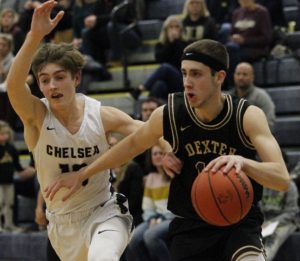 Chelsea opened the night on a mission. The Bulldogs took a commanding 12-3 lead with 4:30 left in the first quarter. Bavineau’s half-court triple at the buzzer was a huge three points as it cut the deficit to 14-10 after one quarter and gave the Dreads a little mojo.

Bavineau hit his second big three-pointer of the night to cut Chelsea’s lead to 38-35 with 4 minutes left in the third quarter as the Dreads refused to let the home team pull away.

Three-pointers from Pnacek and Colin Parachek cut the lead to 42-41 with 54 seconds left in the quarter. Colin Parachek’s free throw tied the game at 42-42.